Band of Angels: A Review 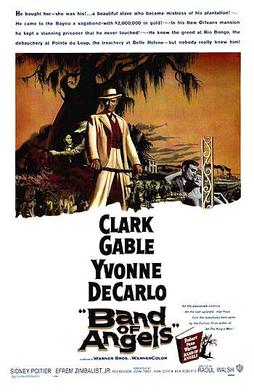 There should be something almost tawdry about Band of Angels. It's got a lot of melodrama rolling around the moonlight and magnolias of the Antebellum South. There's forbidden love, war, twists. Somehow, Band of Angels does not fully embrace its own trashiness, forever aiming like our heroine for respectability and failing at it.

Amantha 'Manty' Starr (Yvonne DeCarlo) is the privileged daughter of a Kentucky plantation owner in 1853. As a young girl, she's puzzled as to why her mother is buried not in the family plot but in the Starrwood Plantation gardens.

Sent away to Cincinnati for her education, where she is romanced by abolitionist preacher Seth Parton (Rex Reason, which is truly one of the great screen names) but has to rush home after learning her father is extremely ill. Arriving back in Starrwood just in time for Daddy's funeral, she gets a double dose of shock. Not only is her father dead, but she discovers that she is a 'Negress', her mother being a slave.

At this point the film does not make clear whether Amantha's mother was black or able to 'pass' for white, or whether her mother was aware of her status, or why her father chose not to keep this liaison secret given all the other slaves seemed to know Miss Manty's true heritage.

Nevertheless, as someone who is part-black and legally a slave, Manty is carted off with the other slaves to pay her father's debts. She is almost ravished by the evil Mr. Calloway (Ray Teal), the slave trader who has designs on our fair maiden, but she almost escapes via suicide.

In New Orleans, she is auctioned off, with her still insisting she is white and appalled at how she is being treated. The buyer is Hamish Bond (Clark Gable), who purchases her for reasons unknown, placing a $1,000 opening bid to stop others manhandling her. Manty is puzzled by Hamish, rebuffing his company but eventually succumbing to his charms despite her 'tainted' blood.

Her ardor is so great she rushes to join in at his plantation rather than go onto Cincinnati as he had arranged. Her status is still unclear: it seems just about everyone knows she's 'colored' but she is not treated or thought of as a slave.

One person who is not pleased is Rau-Ru (Sydney Poitier), whom Hamish has educated and treated almost as a son. Despite Hamish's personal kindness Rau-Ru remains bitter and angry, as he sees that Hamish's kindness puts him in greater bondage, not being free legally but not being totally free within Hamish's world.

At last, the Civil War erupts, and Rau-Ru is forced to flee when he strikes a white man who is accosting Amantha, still screaming about 'being white'. He eventually joins the Union forces, while Hamish, revealing his secret past as a slave importer, helps Amantha go back to New Orleans, where she still 'passes' for white.

She catches the eye of Lieutenant Ethan Sears (Efrem Zimbalist, Jr.), but is discovered at a ball by Seth, now a Captain. Seth is still extremely moralistic in his manner, and knows Manty's secret. However, in a moment of passion, he attempts to have his way with this 'Negress', shocking Manty and himself.

She flees to find Hamish, who has been found by Rau-Ru. Rau-Ru also discovers his own past tied to Hamish, and in the end helps his former master and his mistress escape.

Again, one would think Band of Angels has some pretty wild goings-on, with miscegenation being the smallest part of this steamy story of the Old South. However, director Raoul Walsh seemed more interested in making a grand epic than a pulp film the Robert Penn Warren adaptation all but cried out for.

Many have compared Band of Angels, fairly or not, to Gone With the Wind. There is no comparison there, and not just because Gone With the Wind is simply a much-better film. Whatever Scarlett O'Hara's faults, she wasn't as weak as Manty.

I've never believed in the idea of 'white privilege', but if I did, Manty would be the poster child for it. Few people have behaved almost hysterically at the mere suggestion that they are anything other than 'white' as Amantha Starr. I could cut her a little slack in that she had to endure both the loss of her father and loss of identity on the same day, the double blows being a lot for anyone.

However, for the rest of Band of Angels she seems unwilling to ever admit to her true heritage despite being repeated reminded that she is a 'Negress'. Anytime anyone ever mentions or points out that she is biracial, she keeps going off about it not being true.

As a side note, one of the more creepy aspects of Band of Angels now is that the film wants you to feel sympathy for her when she is on the auction block because she is 'white'. If her heritage were more 'obvious', would anyone give Manty greater consideration? Would the fact that a woman, regardless of race, was being sold, be shocking enough without throwing in the fact that she has porcelain skin and green eyes?

In terms of performances we see Clark Gable give not so much a bad performance but more one that is coasting. He seems to be slipping into what a Clark Gable parody would be, all poses and stern expressions. Yvonne DeCarlo should have been better, and sometimes she showed a more human side to Manty, such as her shock and horror at Hamish's slaver past. However, her stab at a Southern accent seemed to come and go, and there was too much staring out with worshipful eyes.

Tommie Moore as Dolly, the 'Prissy'-type slave, was simply dreadful, all wild overacting and nonsensical sayings. Counteract that with Carolle Drake's Michelle, Hamish's slave/former mistress, whose elegant manner and French would have made her a more interesting character. Same for Reason as the single-minded Seth, full of high morals and righteous fury but who still has lustful desires which almost overwhelmed him one time.

Sydney Poitier is interesting here in that this is rare film of his, at least to my knowledge, where he plays a slave. His performance kept that distinct Poitier dignity, the rage within the cool exterior of Rau-Ru bubbling but never giving in to hysterics and overblown manners. Even as a slave he is imposing, almost frightening in his contempt for Hamish and Amantha, forever denying her true identity.

One of Band of Angels' strengths is Max Steiner's score (himself a Gone With the Wind veteran). It brims with fire and fury, keeping things from tipping over completely into pulpy farce.

Band of Angels is not terrible but it isn't very good either. It does not explore Manty's ability to cross the color line, and worse, makes her surprisingly unsympathetic to the plight of her people, masking herself in white privilege. Not once in my memory does she question the morality of slavery even after discovering she is part-Negro. Despite being black (though the film never makes clear how many 'drops' of black she is), Manty has a false air of superiority to her which makes her almost a villain when she should be someone we care about.

Still, it's one of those 'not-a-bad-way-to-spend-an-afternoon' type films, one you see and forget.