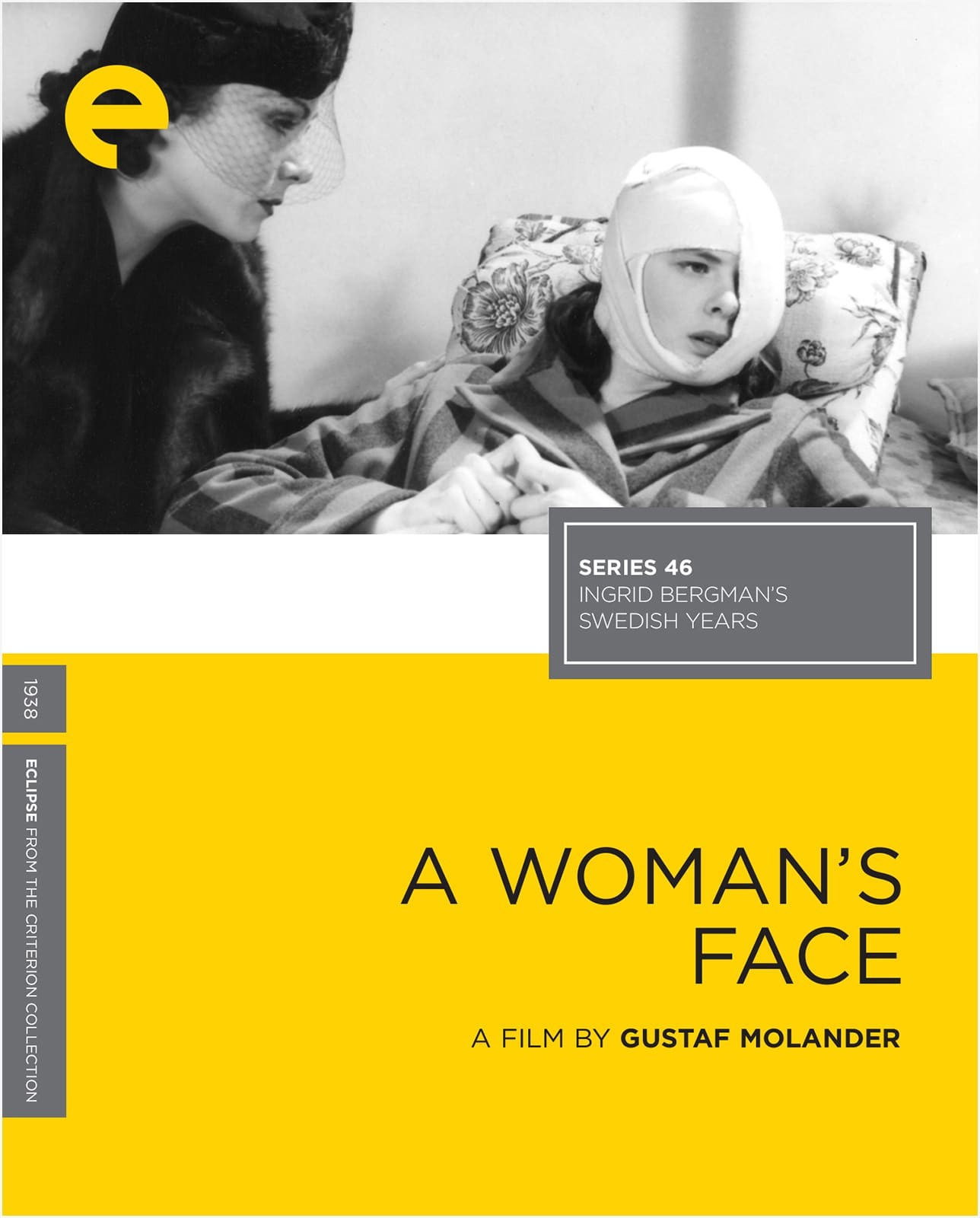 I imagine that A Woman's Face is one of those "See Ingrid Bergman As You've Never Seen Her Before!" films. It is a departure from her usual elegant and/or heroine roles as this villainous master criminal. What is interesting about A Woman's Face is that she up to a point cannot rely on her looks but on what was always there: her talent.

Even if she doesn't hold on to that particular 'face' for long.

Anna Holm (Bergman) is a wicked woman, the brains behind a blackmailing racket. She has cause to be angry with the world: a facial disfigurement made her an easy target for abuse, causing the world to reject her.

Through circumstances that involve her newest blackmailed couple, she receives plastic surgery and now has a beautiful face. Now masquerading as 'Miss Paulsson', she ends up as governess to Lars-Erik (Goran Bernhart), a child who is heir to a fortune.

Over time, 'Miss Paulsson' starts softening towards humanity, the genuine love of Lars-Erik and his family showing her a kinder side of people. She also is falling for Lars-Erik's uncle Harald (Gunnar Sjoberg), who is equally smitten. However, there is the wicked Torsen Barring (Georg Ryderberg). He too is Lars-Erik's uncle, but unlike the affable and relatively well-off Harald he is facing financial trouble. He is also next in line to the Barring fortune should anything happen to Lars-Erik.

Torsen realizes who 'Miss Paulsson' really is because he had hired her gang before and because of a telltale reaction to try and cover her face whenever her actual name is mentioned. Torsen bullies Anna to either help him kill Lars-Erik or at least stay quiet. Eventually, during a birthday sleigh ride, Uncle Torsen tries to kill his nephew. Anna pleads with Harald to chase after them, tearfully confessing all.

While Lars-Erik and Harald survive, Anna finds her guilt overwhelms her and takes refuge with the kindly plastic surgeon. Despite Harald's pleas to return, she decides to go to China and be a governess for an American couple there, starting her new life in a new world.

A Woman's Face may be the most challenging role in Ingrid Bergman's pre-American career. It circumvents our ideas of what an 'Ingrid Bergman' type is. She is the glamorous beauty or initially a sympathetic figure but an evil woman. Brutal, unfeeling, heartless, Bergman has the challenge of making us care about Anna's evolution as well as make it believable.

It is to Bergman's incredible talent, along with director Gustaf Molander, that her spiritual transformation was very realistic. In other hands we might have had a big scene or deliberate plays for tears. Bergman and Molander however, opted to show this gradually and with subtlety. After Lars-Erik gives his governess a kiss, we see how troubled Anna is, how unaccustomed she is to genuine warmth. Her fear and terror and guilt as she pushes Harald on to save Lars-Erik is also so well-played.

We even gets those 'unconscious' reactions of her attempting to cover her face even after the successful surgery, brilliant touches that lend texture to her performance.

It is not as though we don't get a background into how she turned out this way: in a moving monologue we learn her troubled criminal parents eventually led to a fire where they died and she was burned. It might also be that the play may be a bit too hard on the idea that the physical and spiritual reflected each other, but I think the audience can be trusted to know that her physical appearance was a reaction to versus a cause of her emotional hardness.

We had good performances from the rest of the cast, and even a bit of levity in the wordplay between the elderly Consul Berring, Lars-Erik's grandfather, and the longtime maid who was willing to tell him exactly what she thought. The criminal gang might have gotten away with it but even they had some amusing moments.

Molander should also be credited with having a very good chase scene across the ice, building on the tension even though the filmed background was obvious.

The ending, while not a happy ending at least is satisfactory. It didn't have the lovers reconcile but it does make Anna's transformation complete: from a cold woman to one willing to sacrifice her own happiness to bring happiness to others.

It's only real drawback is that it takes a while for the story to get rolling. I confess to dropping off for a bit between the blackmail and the encounter with the plastic surgeon. Once we get to the transformation into 'Miss Paulsson', the film picks up steam.

Apart from that though A Woman's Face shows us that there was a deeper and greater talent within Ingrid Bergman, something that is always appreciated.

One last thing: the closing credits to say "The End" in Swedish are written S-L-U-T. It might come as a shock to see "SLUT" in bold letters, but be forewarned it is not a commentary on Anna or Ingrid.