That is how Shakespeare described Cleopatra, and I believe it is an apt way to describe Elizabeth Taylor as well.

Cleopatra, while not her best work, I think captures all the qualities of Dame Elizabeth: breathtaking, a bit gaudy, opulent, gigantic, impossible to miss, and never boring. I am aware that many critics hate the film, and while I recognize the problems within it, I am like the majority of the viewing public: I enjoyed it and was entertained far more than I thought I would be.

As stated, this was not her best film, and at the time she was deeply embarrassed by it. In fact, throughout her career, Taylor appeared quite dismissive of her actual acting talent/abilities. When she received the American Film Institute Lifetime Achievement Award, she said something along the lines of, "Looking at (her performances), I wasn't all that bad, was I?" She seemed, like many critics of her time, to focus on her remarkable beauty and fail to see that Elizabeth Taylor was a strong actress.

She was giving great performances even as a child. Take National Velvet. Here, at twelve, she communicated that youthful innocence mixed with a great determination to win the Grand National, and we in turn believe she can do it. Taylor created in her Velvet Brown a character children would identify with and adults will cheer for.

National Velvet, I believe, is the first truly great film of Elizabeth Taylor's career, one where her character is not dependent on an outward beauty but on the emotional connection she created between the screen and the audience. 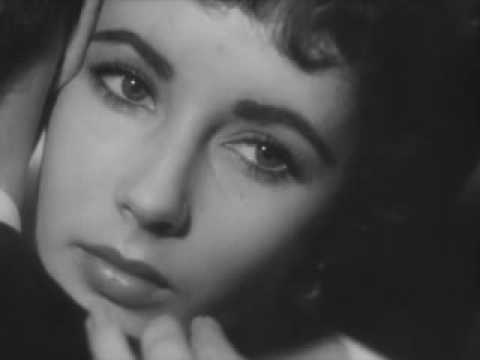 As she grew into adulthood, admittedly, she grew more beautiful physically. There was the sweet, sentimental Father of the Bride, but for a mixture of her amazing beauty and her talent, her true acting talent, that would be A Place In the Sun.

It certainly helps to have Franz Waxman's haunting score, Edith Head's magnificent costumes, and George Stevens' brilliant direction. However, when we first see Taylor's Angela Vickers, we can see why Montgomery Clift's George Eastman was so driven in his need to be with her.I cannot remember who said it, but it is clear once seeing her on screen, I agree with whoever said that Taylor made the most beautiful motive for murder.

She becomes that obscure object of desire, that unreachable Goddess for whom life cannot continue without. Her performance is one of innocence, unwittingly the catalyst for a terrible tragedy. In A Place In the Sun, she mixes that innocence, perhaps obliviousness to the dark side of love, with a burning passion released by the guy from the wrong side of the tracks. "Tell Mama," she coos to Clift when he cannot tell her just how much he feels for her. "Tell Mama...all". What man wouldn't melt into her arms, or do anything to be at her side?

After A Place In the Sun, she was in more masterpieces where her performances should have put any doubts as to her acting abilities to rest. First off, there's another George Stevens film: the appropriately-named Giant. Here, Taylor has to not just age physically on screen, but have an evolution in her character. Leslie Benedict has to grow from a well-brought up Southern belle to a fiery Texan gal who stands up to her husband against the prejudice she encounters against the Hispanic population dismissed by everyone born in the Lone Star State.

It could have been easy to have lost amid the grandness and epic nature of Giant, but Taylor's performance always holds your attention as the moral core of people not accustomed to have their old ways questioned, especially by a non-Texan. It is Leslie's strength that we gravitate to, her sense of doing the right thing regardless of how it looks, that makes Leslie the heroine of Giant.

Going against the moral courage of Leslie, we shift to her Maggie the Cat in Cat on a Hot Tin Roof. Although it's never overtly stated, it's clear Maggie wants one thing and one thing only from Brick: Sex. Passion. Desire. She wants to fill the man she loves with all of herself, and we all think Brick's crazy for constantly rejecting her advances. Maggie is an object of desire, but there's nothing obscure about it: it's blatant.

Taylor used especially her body to project her desirability to someone who seems not the least interested: how she caresses her leg while straightening her seams before an ambivalent (in perhaps more ways than one) husband, how she stands in her negligee. However, like Leslie, Maggie the Cat isn't some sex-starved nympho: she's a strong woman willing to fight for her man.

At the end of Cat on a Hot Tin Roof, she tells Big Daddy that she is expecting a child, which delights the old man. We are never truly sure of the veracity of the statement, but we agree with Big Daddy's appraisal of his daughter-in-law: she's got life in her. Take that statement in whatever way you wish, but it is certainly truthful.

Then came Cleopatra, that monument to excess, that spectacle that nearly brought down Twentieth Century-Fox and that for all intents and purposes brought about modern films: big paychecks for the stars, the ensuing massive press coverage of the good and bad of the production, paparazzi stalking of those in front of the camera. At the time of its release, critics were vicious, but I take the view of Roddy McDowall, who said that the film became so notorious that people couldn't see the forest for the trees. Is Cleopatra a great film? No: at times it is in danger of drowning in its own excess, and at times good actors like Taylor, Richard Burton, Rex Harrison and Hume Cronyn are dwarfed by their surroundings and slip into overacting. Even though Joseph Mankiewicz, an experienced filmmaker and first-rate screenwriter, was at the helm, Cleopatra still managed to bungle its efforts to reach the level of other epics like The Ten Commandments or Ben-Hur.

The problems that plagued Cleopatra are legendary, but even among the more chaotic elements there are still moments of brilliance: Cleopatra's arrival in Rome is, even almost fifty years after the fact, still a simply remarkable sequence.

Within it all, there stands Elizabeth Taylor: regal, grand, in perfect command of all she surveys. This is a constant with my thoughts: Cleopatra is not Elizabeth Taylor's finest hour as an actress. However, it is nearly impossible to divorce the lavishness of the Egyptian queen from the lavishness of the Hollywood royalty. Whatever the flaws, Taylor commands the screen in Cleopatra with such force that we sit in awe at the sheer spectacle of it all. Of course, we cannot ignore that this film is what brought her together with the Love of Her Life: one of the great actors of his generation: Richard Burton. 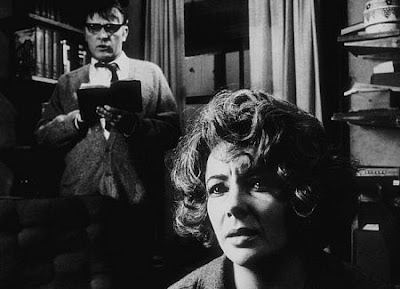 For my money, Elizabeth Taylor's greatest performance, in fact, one of the greatest performances on the screen by any actress, is in Who's Afraid of Virginia Woolf? Her Martha is a person whom we should all truly hate: a vile, vulgar, hateful, spiteful woman who emotionally tortures and belittles the seemingly wimpy George. What makes her performance more remarkable is that Taylor could not rely on whatever first made her a star.

She could not rely on her beauty: Martha is a plump, disheveled person who appears to be falling apart at the seams. Her violet eyes cannot be seen in the black-and-white film. Taylor has to rely only on her acting ability, and in Who's Afraid of Virginia Woolf?, she takes us into the heart of a very angry yet haunted woman. Martha is a woman filled with spite and fury, but by the end of a long dark night of the soul, we don't hate her.

We actually feel great sorrow and sadness for her when we see just how hurt and vulnerable she is, and how there truly is love between her and George (even though they hurt each other so much).

One could make the argument that Who's Afraid of Virginia Woolf? is just the Burton-Taylor marriage stripped of all its trappings of wealth, and that their next film, The Taming of the Shrew, is just the Burton-Taylor marriage played for laughs. This may be true, but just like one cannot help but marvel at the depth of wisdom and tragedy in her performance in Who's Afraid of Virginia Woolf?, one can't help but smile at her turn as the foul-tempered Katharina.

What I truly enjoyed in The Taming of the Shrew, apart from Franco Zeffirelli's directing and Shakespeare's immortal words, is in how the film ends. At the end, while Burton's Petruchio congratulates himself on the successful 'taming of the shrew', we see Kate having the last laugh by walking out and leaving her "master" behind. Has she truly been tamed? Well, that's really up for debate in the film version. This Kate might be married, but she is still her own woman: a truly happy ending for all.

As a side note: I am aware of the controversy about The Taming of the Shrew as being misogynistic at worst, sexist at best. I can only say that it IS suppose to be a comedy which we aren't suppose to take seriously. Therefore, we have to take it all with a giant grain of salt. In discussing and reminiscing of Elizabeth Taylor's career, I would be remiss to forget her tireless work for AIDS research. She took on that cause long before and long after it became fashionable. When was the last time you saw a major star at an awards show wear a red ribbon? Once, they were de rigueur at any Hollywood event, but now, all but forgotten.

If we went by what those in the entertainment industry did, we would have thought AIDS had been cured. It hasn't: people live longer with AIDS, but AIDS itself is still sadly with us. Taylor never shied away from being associated with a sexually transmitted disease, especially one carrying a strong social stigma. People nowadays who may not know about AIDS or the fear it caused in the mid-to-late 1980s may think it is something from the past like bubonic plague.

To her eternal credit, Elizabeth Taylor was persistent in her commitment to find treatment and an eventual cure, and through her efforts at awareness and research, many people are alive. I imagine that besides her two competitive Oscars for Butterfield 8 and Who's Afraid of Virginia Woolf? the Oscar she was proudest of was her Jean Hersholt Humanitarian Oscar for her work on behalf of AIDS research.


I think the best way to end these reflections of Dame Elizabeth Taylor are with another quote about Cleopatra, this time from the way Plutarch remembered the Egyptian queen.

"For whatever she did, she did with complete devotion. When she loved, she loved completely. When she hated, she hated with fervor. When she mourned, she mourned with all her heart".