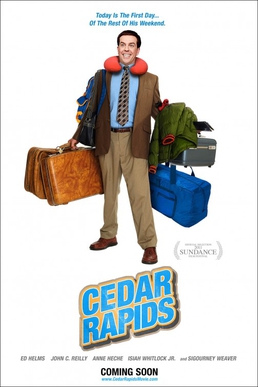 Surprisingly enough, Cedar Rapids, Iowa is not known as a hotbed of debauchery, decadence, or wild goings-on. The Midwest is generally known for being populated by sweet, naive people like Tim Lippe (Ed Helms), people whose idea of adventure is trying a new fast-food place. The comedy in Cedar Rapids comes not from holding the characters up to ridicule, but in throwing them into unfamiliar situations totally outside their experiences and seeing them stumble into a positive resolution and seeing them grow.


Tim Lippe has never left Brown Valley, Wisconsin. He devotes himself to his employer, Brown Valley Insurance, was a sincerity usually reserved for children waiting for Santa Claus on Christmas. Lippe is in such a state of arrested development that he is thrilled to be having an affair with his former elementary school teacher, Macy Vanderhei (Sigourney Weaver) to whom he's passionately devoted to.

Now, Lippe has the most daunting task he's ever faced before him: represent the company at ASMI, a regional insurance company convention. That means going to the 'big city'; that's right, the aforementioned Cedar Rapids. This means getting on an airplane for the first time in his 34 years, and more amazingly, staying at a hotel, with an indoor pool! Lippe greets all these amazing sights with an eager 'awesome'. However, his boss, Bill (Stephen Root) gives him a few words of warning: stay away from Dean Ziegler (John C. Reilley), someone who steals clients and corrupts all who come near him. 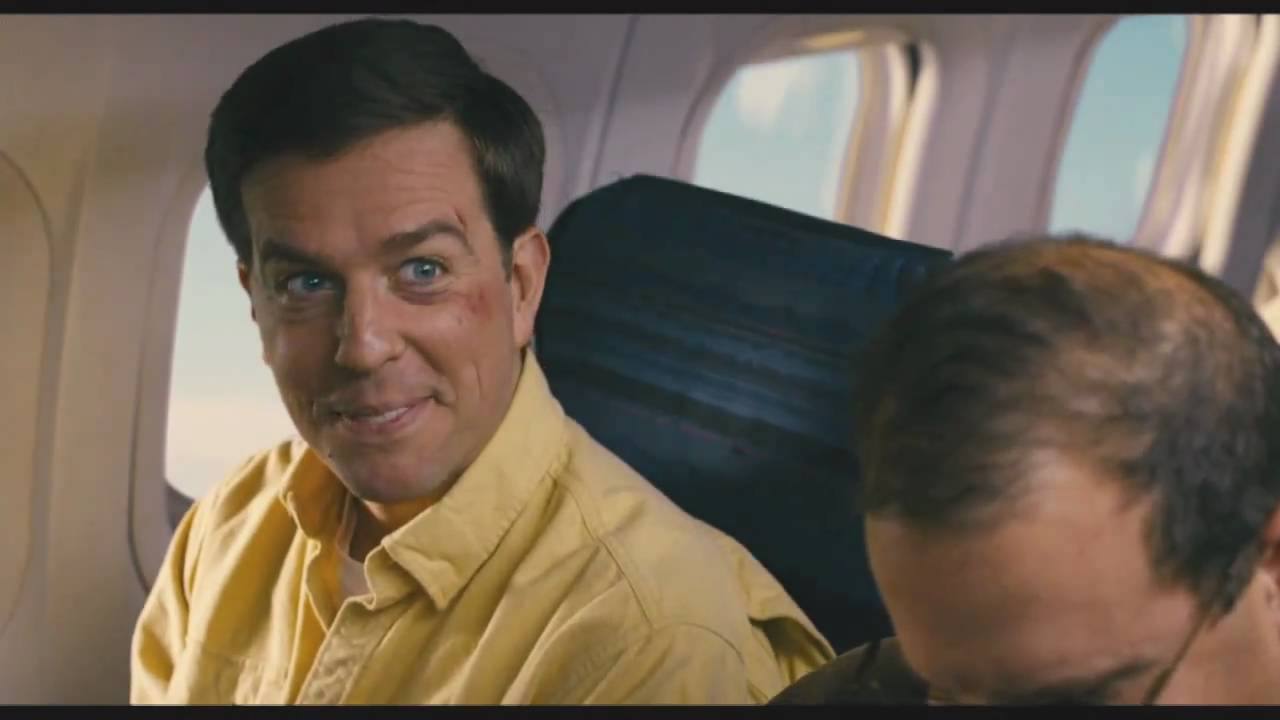 Tim has only one task at the ASMI Convention: win the Two Diamond Award, given to the most ethical and morally upstanding insurance firm, for the company, which has won it three years running. Now that Tim is in the big city, he sees all the things that the outside world has. He shares a room with Ronald (Isiah Walker, Jr.) and horror of horrors, Dean. Joining the three is another conventioneer, Joan Ostrowski-Fox (Anne Heche). Tim wants to do his best and impress President Orin Helgesson (Kurtwood Smith), but Dean and Fox just want to have fun, with Ronald wanting a bit of fun but primarily to win the award through his own hard work so as to get back to his self-proclaimed secret passions of antiquing and community theater.

As the convention goes on, the relationship between Lippe and Fox grows more passionate. Lippe soon learns just how Brown Valley won the Two Diamond Award, and he follows his predecessor's route in obtaining the prize. In his despair, he goes to a party with Bree (Alia Shawkat) the pleasant woman who stands outside the hotel every night (it isn't until late in Cedar Rapids that he realizes exactly why she stands outside the hotel every night). Eventually, Tim realizes that all he thought before leaving Brown Valley about ASMI and Dean and even Macy wasn't necessarily so and takes steps to fix things.

Cedar Rapids appears to be a distant relative to The 40-Year-Old Virgin, primarily in the main character: both sheltered men who can function in the world but who appear a bit perplexed by it. Given how naive and sheltered Lippe is, it is amazing he isn't a virgin, and even more amazing that two women (Fox and Bree) want him sexually and that he has had sex with two women (Macy and Fox).

This is, after all, the same man who appears unaware when a woman is flirting shamelessly with him or how what he says can be misconstrued as a double entendre, his closing speech at the Two Diamond Award presentation being a prime example.

To his credit, Helms doesn't make Tim a complete object of ridicule. Instead, Helms makes Lippe closer to a hopelessly innocent being who truly sees his insurance job as a force for good in the world. There is a fine line between being naive and being stupid. The Betty White on The Golden Girls knew how to keep the balance with her Rose.

Helms, unfortunate, does cross it. How else to explain how when trying to buy the award he appears unaware that $1500 in cash is of more interest than the $50 in a check he offers?

I figure this may more a flaw in Phil Johnston's script than either in Helms' performance or Miguel Arteta's direction. Helms never plays Tim as an absolute idiot, which is why we end up liking him. Johnston's story in on the whole a sweet tale of a true fish-out-of-water, but at times the Lippe character doesn't appear to be balanced between between a true innocent and just being a moron.

For example, Tim is shocked to see Fox remove her bra in the pool, but wouldn't someone who has been banging his dream woman who, if using the actor's ages, is twenty-five years his senior (side note: Sigourney Weaver is 61?!) already be quite familiar with naked women?

Another aspect I wasn't too thrilled on a personal level in Cedar Rapids was the notion that the Two Diamond Award, presented not based on something that could be measured like sales, growth, or positive customer ratings but on upholding a vaguely 'Christian' standard of morality, had not just been won by deception, but by a sexual deviant. It made me wonder whether ASMI was merely an insurance convention or a gathering based around a religious affiliation: having a prayer breakfast at the convention, something I don't think most multi-company gatherings have, didn't clear up matters.

It made me wonder if this was a shot at Christians, something I am always wary of since I am reluctant to go after people's private faith system regardless of what it may be.

Those are a couple of issues I had with Cedar Rapids, as well as my feeling that the film is a bit too conscious of the fact that it's suppose to be quirky and offbeat. Take for example, when Lippe's new-found friends get him to perform at the convention's talent show. While the song itself was amusing (a parody of O Holy Night with lyrics about insurance) and he does say the song was sung at Brown Valley Insurance's Christmas Party, I did wonder if it was just a bit too clever for the embarrassed and almost frightened Lippe to sing a capella.

Whatever flaws Cedar Rapids has, they are made up for by the performances. Reilly's Dean is unapologetically vulgar, crass, and lusty. Dean's uncensored honesty is what makes us like him, although trying to play at our heartstrings by giving us a backstory about a failed marriage does seem a bit of an afterthought since it's at odds with how the character is through most of the film.

Whitlock's Ronald is one of the better performances: the man of reason in the oddball group. I figure there are hints that Ronald may be in the closet: granted, his love of antiquing and reluctance to go into a same-sex wedding party Dean gets them all to crash suggest this, and if this is relevant to the general story it does appear to pop up only intermittently.

Heche has the best performance in the film: she is the most realistic character in Cedar Rapids. Heche allows us to see how innocent teasing and flirtations with Tim turn into genuine romance, but how this can only be a convention fling. Hearing her describe how Cedar Rapids itself is a break from her regular life is a wonderful moment.

Cedars Rapids has great moments of genuine humor which spring naturally from the story, and the closing credits are funny, albeit in a self-consciously obvious way. It isn't a perfect comedy, but the performances and the generally sweet story of a naive man discovering the larger world outside is entertaining.

If only conventions could be this funny...