This month marks a special celebration: it is Akira Kurosawa's 101 birthday. I ask, how could his centenary pass by unremarked on? I hope to take this opportunity to play homage to one of the great directors of all time, of any genre, in any language.


Kurosawa was a director who managed to make the epic intimate and is the perfect example of how cultures can influence one another. I reflect on two of my favorite Kurosawa films: Seven Samurai and RAN. The former influenced American Westerns: being remade into The Magnificent Seven, while the latter was influenced by the same genre: the heroes on horseback racing to see smoke coming from the horizon an homage to The Searchers.

Perhaps this is one of things that made Kurosawa such a giant in cinema: he was international in his filmmaking. Let me explain: while his films were rooted in Japanese history and in how contemporary Japan balanced its traditional worldview with its desire to be considered in the same league as The West, his films also touched on feelings that we all share. 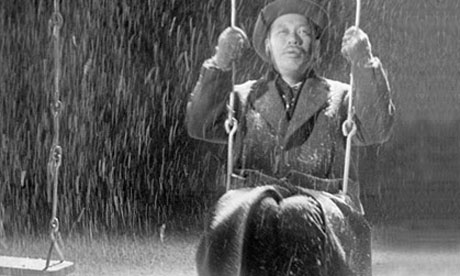 Take Ikiru for example. I think even today, the homogeny that Japanese society appears to revere would be at odds with the main character's need to leave his own individual mark on the world. However, like Kanji Watanabe, I think all of us have that need to know our own individual lives matter, that we want to leave at least one positive remembrance of our lives before we pass.

In a sense, don't we want to be remembered for something good after we die? Kurosawa could use then a Japanese setting, with Japanese characters and values to speak about deeper, richer, more universal themes: the value of a human life. In retrospect, to borrow a title from another Great Director: It Is A Wonderful Life. Kurosawa, conversely, could also take the West and make it uniquely Japanese. I look at Throne of Blood. It might surprise people to learn that Macbeth had been adapted into a Japanese setting, but Kurosawa showed that genius need not be limited to one language or setting. It's a curiosity to my mind that while there have been many efforts to adapt Shakespeare from the original settings of his plays more often than not these efforts fail.

I remember Baz Luhrman's Romeo + Juliet: many people love it, I thought it was a bastardization of the play. In a sense, it was a dumbing down of the story: just by putting a contemporary setting one doesn't make the words any easier to follow. Here, Kurosawa understood something that many English-language directors apparently can't get through their heads: it's the story that people will relate to. Granted, when the works are in English one should keep the film version in the original language, and filmmakers have the conundrum of either making the words more up-to-date or stay with the original text (which may sound today rather foreign). Kurosawa could have tried for a translation of Macbeth, but his intelligence told him that would not work for his primary audience.


Instead, he transposed Macbeth to be a Japanese warlord, but kept the plot pretty much intact. Some of his imagery is remarkable: when Washizu (aka Macbeth) and Miki (aka Banquo) come upon the Spirit of the Forest (aka the Three Witches), with all the fog and the Spirit spinning his/her wheel (while I figure it was a woman, the voice was a bit deep), it was pretty haunting, even frightening and a remarkably eerie sequence. Another of my favorite moments in Throne of Blood is when Washizu is being besieged: as the forest descends upon him, a fury of arrows comes again and again to kill him. It is the anticipation of his fall that makes these assassination attempts all the more frightening.


The same ability of Kurosawa to adapt Western stories successfully to a Japanese world isn't just reserved for classics. It would be remarkable to imagine a hard-boiled detective story by Ed McBain could be a seminal work of Japanese cinema, but there you have High & Low from King's Ransom. The film isn't just a tense story of kidnapping, but also a commentary on contemporary Japanese society, the struggle between those who have achieved financial success and those who can only look on in envy. Again, I would say how is this different than any envy in any part of the world?


However, Kurosawa was best when he made Japanese films about Japan: its past or present. He could find even moments of comedy, such as The Hidden Fortress. My favorite moment from this film, the inspiration for Star Wars, was when our bumbling criminals found each other as one was being herded up a massive flight of stairs and the other herded down. The affection these two had for each other is endearing, if not necessarily their deeds. 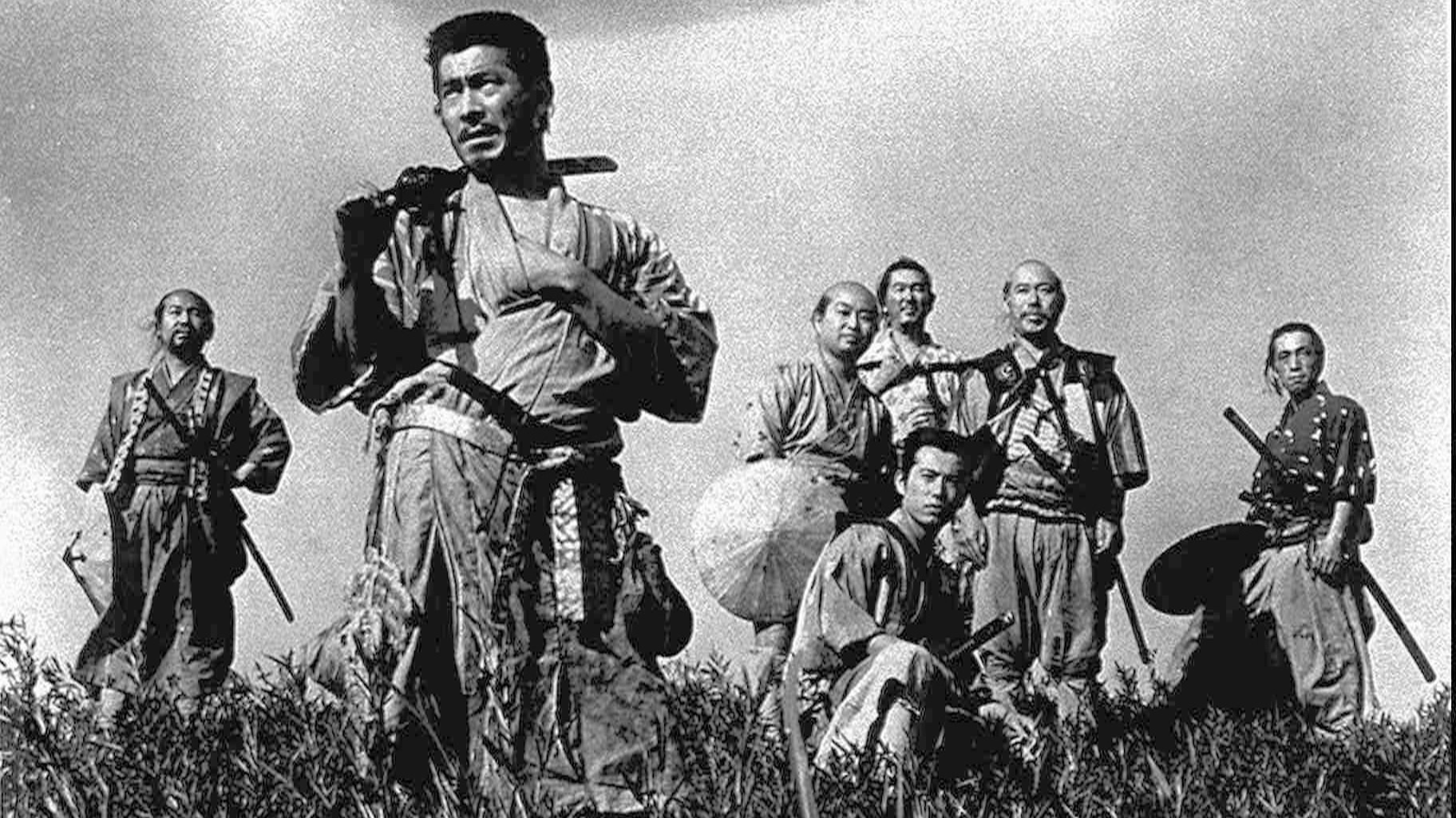 Now we go to Seven Samurai, one of the greatest films in history. Don't let that frighten you, nor the fact that it's over three hours long, it's black-and-white, and in Japanese. I can imagine many people fleeing into the safe arms of Grown Ups after hearing that description.

Right from the get-go, we get a mixture of action, comedy, and romance, all without the story short-changing any of the elements. Most of the comedy comes from Toshiro Mifune, who plays the seventh samurai, one who may not be what he appears to be. With his peasant demeanor and excessively large sword we know who and what he truly is, but it is because he shows himself to be both brave and a strong leader that we never question his inclusion into the samurai group. He also has a winning way with the villagers, especially whenever he tries to show just how good he is.


Kurosawa also takes great care to let us know all the characters: along with all seven samurai, we know the villagers and even the marauding gang terrorizing the village. He allows us this because he is patient and asks us to be patient with him, to not expect things to be given to us plot-wise so quickly but to let us discover things for ourselves. We can understand the fear and hypocrisy of the villagers, the motivations of the samurai, and even those of the gang. We also see the romance between one of the samurai and the peasant girl grow naturally, and when they succumb to their passion, and even when they are courting in a way, the imagery is beautiful.


That isn't to say the action scenes are short-shifted. The massive final confrontation is intense, exciting, and tragic, all at once. Few battle scenes have been as good or as well-made.

Seven Samurai is the work of a young man. RAN, Kurosawa's take on King Lear, is the work of an old man. While the former is full of life and enthusiasm, the latter is one filled with world-weariness, regret, and resignation to the folly of man and the evil he does. I should caution that when first seeing RAN, one may be puzzled, even put off, but the acting; it may seem to our Western eyes rather grandiose and over-the-top.

However, we have to keep in mind that RAN, which translates to Chaos, draws heavily on Japanese Noh theater acting, where the players wear masks and the performances are deliberately broad. When one watches it, one sees the work of a man who is tired, not of working, but of the world. It is a bitter film, one where the evil that men do to each other explodes in an orgy of blood and tragedy. This is enhanced by the score: in a battle sequence, the music is not heroic, but mournful, tragic. We hear this sorrowful music as we see scenes of horror: overwhelmed by red, mutilated men holding their own hands (RAN, I should point out, influenced Saving Private Ryan).

In the end, as if to put a coda on the Chaos that has destroyed this family, done with subtlety such as when we shift from green pastures in the beginning to the black ash of a devastated world, we see a blind man on the edge of a cliff, alone, abandoned.


In the final analysis, from my perspective, Akira Kurosawa is a true genius not just because of his actual filmmaking techniques, such as the screen wipe to transition from one scene to another, and the imagery within his films, but because his themes from the hopefulness within Ikiru "to live" to his despair in RAN still resonate today.

Sensei has much to teach us, and we would be wise to sit and learn.

Month by Month, I hope to write one post about The Great Directors.  Please visit for a full retrospective.
Posted by Rick at 1:56 PM