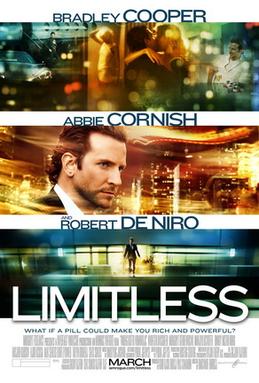 
Do people really only use 10 percent of their brain? I'm told that the total has been upped to 20 percent, and that this notion is really an urban legend. Granted, there are people who don't appear to use any of their brains (anyone who thought The Last Airbender was actually good for example).

Limitless uses this notion as the starting point to its story: what would happen if a little clear pill allowed us to tap into our full potential? Well, judging from the film itself, surprisingly stupid things.


Eddie Morra (Bradley Cooper) narrates his story, which we start with him on the ledge of what I imagine is his penthouse apartment with angry sounding men beating at his door. With this kind of opening, you know we're going to go way back to find how he got to this state. Ed is an aspiring writer, and by aspiring I mean he never gets around to putting anything on paper. Long-haired, undisciplined, and perpetually broke, he cannot muster the discipline to write or to hold on to his girlfriend Lindy (Abbie Cornish).

Nearing the end of his rope, he has a fortuitous encounter with his ex-brother-in-law, Vernon (Johnny Whitfield). Vern tells Eddie of NZT, a new FDA-approved drug that will help him in his time of trouble. Eddie at first doesn't want to take this clear pill but in desperation and curiosity, he pops one. Miracle of Miracles: he now has the power of a beautiful mind. We see this when the shrewish girlfriend of the landlord becomes fascinated by his new-found knowledge of legal matters which she is studying, so much so that they end up schtupping.


With this new power-drug Eddie soon goes back to Vern for more, and he agrees in return for being his gofer. Fortunately for Eddie, someone pops Vern so he doesn't have to do it for more than a few hours.

Horrified, Eddie calls the police, but thinking ahead, he gets the secret stash of NZT before they arrive. Now with this Viagra for the Mind in his possession, he soon starts to fulfill his full potential: finishing a brilliant book in four days, living the high life, and gaining hundreds playing the markets. Of course, he needs more money, so he goes to Russian mobster Gennady (Andrew Howard) for quick cash. He gets enough cash to really go to town on the financial markets, and attract the attention of not just the press but of Carl Van Loon and yes, that is his actual name (Robert De Niro). Van Loon needs Eddie's wunderkind skills in a potential mega merger with Mr. Atwood (Richard Bekins), someone who emerged out of nowhere, curiously enough, to soon have a major financial empire of his own.


As is true in life, things don't always go right. Eddie's abuse of NZT has him living in fast forward, and he may have been involved in the death of a one-night stand. He starts getting sick when he's not on NZT, and his ex-wife Melissa (Anna Friel) reveals she too was on NZT, but that once you are no longer on it you may actually die or turn ill. Eddie also has been pursued by a mysterious man and now Gennady wants his money and then later the mystery pill that's been so good to him. Van Loon also becomes suspicious of how Eddie can get such mental powers.

Eventually, Eddie does manage to use his megamind (pun intended) to defeat his enemies and show Van Loon a thing or two, and get Lindy to hop back to him (pun intended there too).

It may be the worst thing in the world, but in Limitless the biggest point of interest to me was whether Mrs. Atwood (Patricia Kalember) was Georgie on the television drama Sisters (yes, she was; good to know I was still able to recognize her. The show should be on DVD, but I digress). It may be that I was put off by Cooper's narration (a personal dislike for voice-overs in general with certain exceptions: Sunset Boulevard, Blade Runner, although a non-narrated version of Blade Runner still works well), and by Neil Burger's obsession with camera work that draws attention to itself (one super speed tracking shot was acceptable, more than three is just annoying, as was his fish-eye lens when depicting a high).

Limitless didn't seem to understand that Eddie was now a super-genius. One would have thought, for example, that once Eddie gains all these mental powers, he would know the First Rule of Discretion (Do Not Draw Attention to Yourself).


Leslie Dixon, adapting Alan Glyn's novel The Dark Fields, also doesn't seem concerned that as much as Eddie's mental agility has grown almost everyone else's mental agility appears to have fallen. For example, the detectives investigating Vern's murder discover that there is an eyewitness that places Eddie at the scene of the dead mystery woman. Yet they never appear to place him under surveillance or really question him about either deaths. This man has been involved in one way or another with two murders, has hired bodyguards, and has been seen consorting with a Russian mobster. However, none of this is apparently of any concern to the New York City Police, who really don't do much investigating.

Granted, we really don't know anything about the mystery woman but since when is a suspect in two murders allowed to carry on as if nothing really happened? On an extremely technical scale, given the shoot-out at his apartment with the Russian and his henchmen there should be alarm bells going off with the NYPD, but why stop for logic?

This is not to dismiss Limitless altogether. This is not the major dramatic turn Bradley Cooper needs to go beyond memories of The Hangover, but it is a positive step. Cooper shows he can grasp at a more dramatic performance, and seeing him when he's coming down off the NZT high is unnerving.

Unfortunately, as good as he is in some moments, he doesn't seem that interesting when he is sharing the screen with Cornish, who looks like Nicole Kidman's younger sister. Here, both seem so flat, almost bored, with each other, and when the focus of a bedroom scene between them is Cooper's blue eyes than on the interplay between these lovers then there are problems. To his credit, Cooper goes into Limitless fully committed to make Eddie a fully-formed character, and while we can wonder how someone with great intelligence never fully appears to think things out such as why not just pay off the Russian right away, he at least gives a strong dramatic turn and shows he is trying to branch out as an actor.


That I cannot say for Cornish. I suspect her character really had little to do with either the story itself or with Cooper's character, but one wonders why after all she went through with both Eddie as a loser and Eddie as a junkie she would still want to be with him, even after he may have killed someone and put her own life at risk.

Operative word 'may' since the murder is never solved and there is no evidence or apparent interest in solving the crime.

The real mystery is what Robert De Niro is actually doing in Limitless. Van Loon (what a name) is suppose to be this titan of industry, but the character doesn't add anything other than De Niro's presence in the film. In fact, he appears to be playing Jack Byrnes, right down to his facial expressions.


Again, I go back to Burger's directing. He didn't seem to do much for the actual actors, who by and large look either slightly bored or confused at how they ended up here and want to get on to something else. He was, however, totally enamoured with how he could make Limitless look as much like a 3-D film without having to spend the money for 3-D. Many shots called attention to themselves: Eddie's transformation from slob to stud, the fast-forward of Eddie's drug-enhanced day, the ceiling tiles turning into a rolling stock exchange, and while this may just be something I dislike it didn't add much in terms of the story. Neither did a sequence which involved blood-drinking: yes, blood-drinking.

I also fault him for introducing plot elements, such as a couple of murders, and not following through in giving us actual answers and thus, no real reason to introduce the elements in the first place.


Finally, Burger and Dixon introduce what should be a nakedly obvious plot point involving Atwood almost from the get-go. When Van Loon tells Eddie that this Atwood just came out of nowhere, one should instantly know how Atwood came about, so if they were trying to build up a mystery there, they failed miserably.


As I saw Limitless, I could only see that in reality, this is just a story about a junkie with an overlay of sci-fi glossed over it. Dress up the film in whatever guise you wish, but if it were not for the 'mind-expanding' angle, what Limitless would chronicle is a man who finds a new drug, gets high, gets success with it, gets addicted to it, then has a big crash.

For all intents and purposes, Eddie is a drug addict. There is just no way around it. Limitless isn't glorifying drug use, but it does come close to giving us a need to have us want him to continue taking a drug we know will harm or kill us.


Limitless is a misnomer. It does have limits in terms of story and performances. However, in an odd turn, a film centered about using all the mind's powers can be enjoyed if one shuts down most of the mind's power.