The Darjeeling Limited: A Review 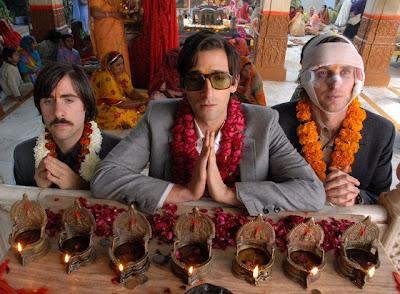 
Next Time Take the Express...

Having seen only two of his films, The Royal Tenenbaums and now The Darjeeling Limited, I figure Wes Anderson is the Master Chronicler of WASP alienation. If just by judging from those two films,  the only ones of his I've seen as of today, Anderson must live in some alternate universe occupied by perpetually unhappy upper-class members, forever plagued by high intellect but empty lives, without souls or personality. I'm almost tempted to say Wes Anderson has a strong streak of misanthropy, since those who occupy his films never have a true moment of peace, of gentle laughter, of familial warmth.

However, this is really a ruse: Francis' real reason to coming to India and having his siblings come is to seek out their estranged mother, who is in a convent at the foothills of the Himalayas. While Jack and Peter are unhappy about being tricked into coming, they have to go along because due to their 'ugly American' antics they get thrown off the Darjeeling Limited and now have to be together. Now with no mode of transportation, they come across three children in danger of drowning, and the ensuing action reminds them of their own lives. Eventually, they opt to go in search of their mother (Anjelica Huston), who is at the most perplexed to find her three sons there, seeking out a form of closure with her. 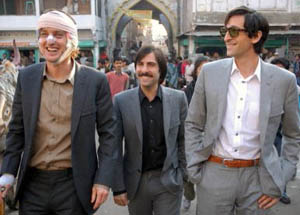 How hard is it for me to like Wes Anderson films? Actually, not that hard. I suppose it comes from our distinct worldviews. Although both of us are from Texas, we see the world in radically different ways. Anderson sees the world as Eleanor Rigby . I see the world as Here Comes The Sun. In short, I think the fact that Anderson appears so terribly cold and analytical to the emotions of others is what keeps me distant from his work. It might have to do with that Anderson's from East Texas, and I'm from West Texas; yet, I digress.

For a film that is suppose to be about people, we never get to know exactly who the Whitman Brothers are. For example, we never learn why Peter and/or Jack would come to a summons from Francis to join him in India in the first place. Did he just call up people he hadn't spoken to in a year, say, 'Come over to India for a spiritual journey' and both of them said yes because they had nothing else to do?

Peter buys a poisonous snake knowing it's a poisonous snake, then seems shocked, SHOCKED that it could be dangerous. Jack's main thing is to be schtupping the train hostess then seeming perplexed as to why she doesn't want to have an actual romance with him. I have an idea: you are too whiny.

Curiously, for a film that is suppose to touch on a journey of the soul, there really isn't much emphasis on actually exploring any deep spiritual practices. There is one visit to a Hindu temple, where Peter ends his prayers with the Sign of the Cross, making me think the Whitmans are Catholic, and one visit to a Sikh temple, but other than that, they don't seem that involved in looking for something to ease their troubled souls. It makes me seriously wonder whether any of them were serious about finding answers to questions of the soul, or were at the very least going on this trip to humor Francis.

As a side note, I figure many WASPs think the answers always lie to the East: be it Hinduism, Buddhism, Yoga, or some form of mysticism requiring a swami or guru. I do not mean to disparage the traditions of the East, but why can't any Westerner find inner peace within Judaism, Christianity, or even Islam? Why can't they ever visit a Catholic monastery? Don't they have contemplation there? Just a thought. 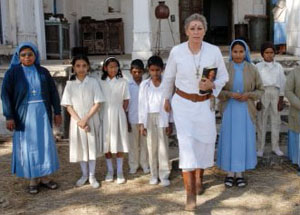 To their credit, I can see the symbolism within the script by Anderson, Schwartzman, and his cousin Roman Coppola. At the end of The Darjeeling Limited, the Whitman brothers race to catch the train, and in order to do so, they need to let go of their dad's suitcases which they've been carrying. In other words, they can't move on with their own individual lives or their lives as siblings without letting 'the baggage' go.

I can see the symbolism of them attempting to rescue the three children in the river, saving their own childhoods, perhaps. However, given that for most of the film each of them comes off as, well, a bit crazy and out-of-touch with their various situations, one can only watch rather bored waiting for something, anything, to happen that will change them in any way. As it stands, they don't appear to have gone any great change in their characters.

Truth be told, I never believed Wilson, Brody, or Schwartzman could be brothers and not just because they bore no resemblance to each other. It's because they don't appear to really know each other, and given that they must have spent at least ten years together, they all seem rather unaware of how one will react to something they do. The fact that all three never seem to talk to each other, but just say things written for them in a near-monotone speaking manner makes them even more remote from the world at large. I speculate that the reason Anderson got Wilson, Brody, and Schwartzman for The Darjeeling Limited, aside from the fact that they all run in the same circle, was simply so we could tell who was who, since nothing in their performances distinguishes one morose child from the other.

Finally, there is the camera work. I figure this is a motif for Anderson: an apparent phobia of cutting from one person to another and an obsession of putting everything in the middle of the frame. I figure he would never go for a Cinemascope picture: having all that space might put him in shock.

Here's how, for the uninitiated, Anderson shifts from one character to another: by swinging the camera from Person A to Person B then back to Person A and then back again to Person B and again, and again and once more. Throughout The Darjeeling Limited and if memory serves correct, The Royal Tenenbaums as well, Anderson just can't cut away to someone else. In fact, I can't quite remember if he ever truly cut from one person to another in the film, and after a while the camera whiplash he appears obsessed with not only gets repetitive but irritating as well.

Maybe he saves money by not having to cut his films, and it may be his way of being innovative, but would it kill him to maybe once in a while going from one person to another without moving his camera between them? Who in reality waits more than a beat to speak when one person ends?

I've been told that Wes Anderson is an acquired taste, and after two films, I haven't any interest in the sad and unhappy lives of rich people who are miserable because their parents didn't love them. One would advise the Whitmans to get some therapy, stop moping about and realize their lives are actually pretty good.

The central point in The Darjeeling Limited is a line Francis' assistant who for some reason he thinks neither Peter or Jack should actually see says when the train gets lost. "We haven't located us yet". It could have been possible to have built on that, to have a real search for self.

Given how remarkably self-absorbed the Whitmans are, it's amazing they would ever take time from staring at themselves to see anything outside of themselves.  I get the symbolism of The Darjeeling Limited, I get what Anderson is saying.  It doesn't mean I believe anything he says.

From what I say, they suffer from alienation brought about by lack of fulfillment, but The Darjeeling Limited shows that they certainly have missed the train.