Superman, the comic book character created by Jerry Siegel and Joe Shuster, has been around for seventy-five years since Action Comics #1 was published.  In those three-quarters of a century the Man of Steel has become a true American Icon.  In many ways, he represents the promise of America: a son of immigrants, he appears weak but is in reality a tower of strength, one who uses his abilities to better his adopted home-world.  He could easily conquer and enslave humanity, but instead Kal-El works to save us.  There is a nobility in him, and Superman is not afraid to fight for "truth, justice, and the American way"... most of the time.

Given his popularity, it's not surprising that in his time he has been a fixture in popular entertainment (radio, film, television).   However, I find that having a Superman-based film has proven quite difficult.  The time between Superman IV: The Quest for Peace and Superman Returns was almost two decades, between Superman Returns and Man of Steel seven (which, given that the former was suppose to launch a franchise, shows how they basically had to reboot the reboot).  I count only seven feature-length films, which is one less than his DC rival Batman.  However, in fairness Batman has had only two television series that I can think of where the Caped Crusader was the lead (one an animated version), while Superman has been in some form on television from the 1950s right down to the Twenty-First Century.

In terms of this Superman Retrospective I have chosen to stick to the feature-length films (sorry Dean and Tom...perhaps your days will come, though frankly I prefer Lois & Clark over Smallville).  This of course means that the Superman serial series will, at least for now, be ignored, but perhaps in the future I will revisit the early screen appearances of the Last Son of Krypton.


We first start in 1951 with Superman and the Mole-Men.  George Reeves was not the first person to portray Superman, or even the most well-known at the time he took the role.  However, once Reeves donned the cape for a generation of viewers, he WAS Superman.  Superman and the Mole-Men was in many ways a theatrical pilot for the Adventures of Superman television series, but it was released as a single feature-length film (not a serial), thus it gets first crack at being part of the Superman Retrospective.  It is at least from what I remember actually a good movie, giving us an allegory on tolerance quite radical for the early 1950s.  However, we'd have to see it again before making up our minds.

There will never be a Superman like Christopher Reeve, at least for myself and the generation that grew up with him as THE Superman.  He never winked at the audience, pretended that the whole thing was ridiculous.  Instead, Reeve played the part straight...most of the time.  Yes, Superman: The Movie had jokes, had light moments, but Reeve was not spoofing the Man of Steel.  In fact, when he played Kal-El, he made it an epic emotional story.  Later on one can argue that the franchise collapsed under its own weight and good intentions, but for now it is safe to say that even now, nearly a decade since Reeve's untimely death, for many (myself included) Christopher Reeve is the face we see when we think...SUPERMAN!  The pluses and minuses of the four Christopher Reeve Superman films (Superman: The Movie, Superman II, Superman III, and Superman IV: The Quest for Peace) will be covered extensively.


WHAT THE HELL WENT WRONG?  Superman Returns, coming almost twenty years (!) after Superman IV: The Quest for Peace, was suppose to reignite the franchise, introducing a new generation to the Man of Steel.  However, while the film was highly praised (though not by me when it premiered), Superman Returns fell flat.  The reasons for that are myriad, and which I'll get into at another time.  I at the time didn't hold Brandon Routh to blame for Superman Returns' failure, though having seen him in another failed franchise-starter (Dylan Dog: Dead of Night), that is now something I'm rethinking.  For the moment, the most I'll say is that Superman Returns failed because it tried too hard to be serious, and it also didn't know whether it was reboot or prequel to what had come before.  As good as Routh might have been in the part (and a second viewing might settle that for me), I doubt his face will be the one thought of as the Last Son of Krypton.


It's a SCANDAL!  The being who fights for Truth, Justice, and the American Way is...British!  I'm not going to go into fits of righteous fury over the casting.  When British beauty Vivien Leigh was cast as Scarlett O'Hara, the epitome of a Southern belle, in Gone With the Wind, my Southern ancestors were right: better an English girl than a Yankee.  Likewise, I say better an English boy than Nicolas Cage.

As Henry Cavill takes his turn as Superman, there is anticipation mixed with trepidation.  I've been pumped up before over the Man of Steel's comeback...and I got Superman Returns.   Will Cavill similarly bomb on screen?  That of course, for the moment, remains to be seen, as Man of Steel (which sadly is NOT the Joseph Stalin Story) will be the final film for the Superman Retrospective.

I certainly won't be swayed by what others think: Superman Returns got glowing reviews but I found it shockingly lifeless, almost morose, and at the end laughable.  Even if it turns out well, one has to remember that Superman: The Movie eventually begat Superman IV: The Quest for Peace (a movie so bad even a friend of mine who LOVED Batman & Robin declared the final Superman-Christopher Reeve film a disaster of nuclear proportions...hint, hint).  Man of Steel will have to wait until it is presented to us before one can say whether Cavill will rival Christopher Reeve's iconic turn...or whether he will be relegated to ranking behind Tom Welling (who has always acted as he has modeled...lifelessly).

Starting from 1951 and Superman and the Mole-Men, through 1979 with the release of Superman: The Movie and its three sequels (including the Richard Donner version of Superman II, a film he had started but did not finish), right down to 2008's Superman Returns, and ending with 2003's The Man of Steel, this retrospective for the cinematic journeys of The Last Son of Krypton will be a short one.  As I've said, while he has been interpreted by quite a few actors, for the purposes of this retrospective we'll stick to the film versions, which would be George Reeves, Christopher Reeve, Brandon Routh, and Henry Cavill. 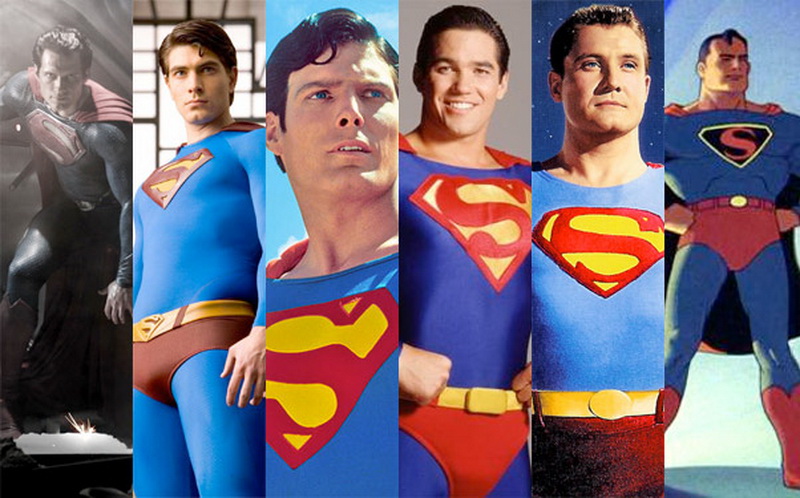