At long last we have an Elementary episode where Dr. Joan Watson (Lucy Liu) lets slip her frustration at not being able to be as quick to solve things as her former client now partner in crime-solving Sherlock Holmes (Jonny Lee Miller) directly to him.  We also get one of the oddest (or cleverest) nods to one of the Canon's most memorable characters that did throw me off a bit.  Finally, in Snow Angels we get less of a murder mystery (though we do get a murder in the beginning) and more of a highly clever heist that made it a wild puzzle to solve.

As a massive snowstorm is heading towards New York City, Captain Gregson (Aidan Quinn) alerts Holmes to a murder.  A guard at a building that holds an iPod-type store has been gunned down and the phones all stolen.  Holmes is convinced this simple robbery-gone-wrong can be solved within an hour (if memory serves right).  He might even have time left over to help Miss Hudson (Candis Cayne), a former acquaintance to Holmes in London who has come to his home seeking emotional refuge after her latest breakup.  Watson isn't too thrilled to have this stranger in their midst, but she isn't about to kick her out either.

In any case, as the storm is a'brewin' and a'comin', Holmes soon finds that this isn't a case about stolen phones.  Instead, the entire robbery is really just a front for a larger crime.  In the same building where the phones were being held is an architectural firm, one that had blueprints for a Federal Reserves branch in East Rutherford, New Jersey.  In short, Holmes realizes that they weren't after phones, they were after millions in cash.

The storm has already shut down the city, and with a little help from Pam (Becky Ann Baker), a woman working for the city as a snowplow driver, they rush to the Fed.  Holmes deduces that the storm will be the ideal time to steal the money by switching out the currency thought to be discarded for useless counterfeit.  Meanwhile, on the original case, Detective Bell (Jon Michael Hill) realizes that a woman brought in for a stabbing, an Alysa Darvin, is really there to cover up getting shot from a botched robbery where the security guard managed to fire a shot before dying.  Darvin is Elle Bastiene (Jill Flint), the brains behind the robbery but who won't crack.

At the E.R.O.C. Holmes deduces how they managed their escape, and here Watson comes up with outrageous deductions of her own (one of them has a lazy eye, she snaps).  She finally tells him to tell her how he came to the conclusions.  With a little guidance, Watson puts the information together to come to the same conclusion as Holmes, but we get a strange twist: despite all his plans the ambulance used as a cover managed to evade the checkpoints put for the storm.  They couldn't just be wished away...or could they?

Using a ruse, Bastiene and her accomplice are unmasked, and Miss Hudson all this time manages to clean the brownstone, with her coming back to be the housekeeper every so often. I kind of feel like the Holmesian who went to Reichenbach Falls and failed to realize he was in the same area where Sherlock Holmes met his 'end' in The Final Problem.  As I watched Snow Angels the character of Miss Hudson just stood before me but I failed to fully appreciate that she was a take-off of Mrs. Hudson, the landlady at 221 B Baker Street.

Perhaps my primary disassociation had to do with the fact that Miss Hudson is a transgendered woman.  She also doesn't start off as a housekeeper, but as a 'muse' a figure that inspires artists to create.  Miss Hudson also has been a mistress to several men, and it is the last breakup with a client that brings her to Holmes.

I think it is because it isn't until near the halfway point in Snow Angels that I got the sense that this was THE Miss/Mrs. Hudson, since it was here that Holmes and Watson are astounded to come home to a remarkably clean place.  Finally, our thoughts on Miss Hudson are confirmed when Holmes hires her to be the housekeeper, so I do hope that means Miss Hudson will return for more appearances.

Cayne's sexual identity is moot throughout Snow Angels, and she is a delightful addition to the dynamic of Elementary.  She and Liu have a wonderful moment of 'girl-talk' that doesn't slow down the crime (especially since the snowstorm forces them sometimes indoors).  Miss Hudson is neither sensationalized or ridiculed, instead, she is a lovely but lonely woman, apt to make bad decisions with men.  Somehow, I figure there are women and a few men who could relate.

In terms of the crime, I thought it was wildly clever up to when we find who the accomplice is.  It should not have been a surprise as to who was in charge of all this but given that we were barely introduced to this character it almost strikes me as a form of cheating.  How are we suppose to really think this person is the main villain if we've seen them maybe once or twice.  In fact, I hardly remember this person even speaking in Snow Angels.  That to me is a big problem, which pushes the episode down a bit. 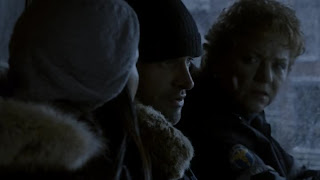 However, this one flaw (although one that can't be ignored) is made up for by some wonderful performances.  Already having noted Cayne's delightful turn, we also get Baker's light comic touch as Pam the Plow Driver.   Pam (who I also hope makes a return appearance) has great rapport with Miller and Liu, and is about the only person we've seen on Elementary who is neither impressed or pleased with Holmes' demeanor.  Her shock at being told by this guy to drive to East Rutherford on basically his own authority is only matched by both her telling HIM to stay quiet (while being fond of Watson, who is more human than Holmes) along with her enthusiasm at having something to do and something to do with cracking a major case.

It was also a great idea to give Hill's Bell more to do, in particular with him realizing that the stab victim was really the perpetrator of the murder.  Earlier we were told that the killer had to have a wig, and when Bell, calmly and rationally, begins to put things together in Darvin/Bastiene's hospital room (complete with wig fibers) we see that Bell and Gregson are highly intelligent people.

The best part for me with Snow Angels is that we not only got to see Sherlock Holmes being brilliant but also constantly being almost mocked or at least reprimanded for rushing ahead of everyone and not bothering to help those who want to help him.  "You see the shadow?" Holmes tells Bell and Watson when examining a clue on his phone.  "Yeah, it looks like a shadow," Bell sarcastically remarks.  The early scenes with Holmes and Pam are also a nice touch to slightly deflate Holmes' inability to stop and behave as most of us would.

However, it's in that brief moment when Watson expresses her anger at seeing how Holmes can come to conclusions that she can't and his patient walking-her through his deductions that lifts Snow Angels to a strong episode.

Snow Angels has moments of comedy, moments of action, and many moments of intelligence.  If it weren't for the fact that the actual mastermind turned out to be almost a footnote to the whole story, it would have been a highpoint.  However, as it stands Elementary has become one of my favorite shows and one of my favorite Sherlock Holmes adaptations (though nothing could take the place of the Jeremy Brett Granada Television series).   I won't let one slip (although a heavy one) take that away from me.

Let the Snow Angels sing out...

Next Story: Dead Man's Switch
Posted by Rick at 7:23 PM