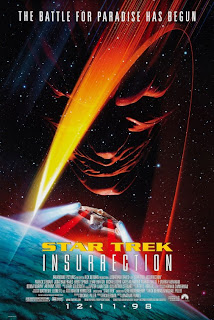 We first see Ba'ku, a bucolic world where the Ba'ku people are living in peace and beauty, but then something shocking happens: androids which up to now had been invisible go on a rampage.  We find that in that rampage is Data (Brent Spiner), and he appears to be the machine gone mad, going so far as to unmask himself before a horrified populace and turning to attack the Federation delegation sent to study this world incognito.

Has Data gone mad...or rogue?  Captain Jean-Luc Picard (Patrick Stewart), away on a diplomatic mission, requests Starfleet to allow him to find Data and bring him in.  Captain Picard and Worf (Michael Dorn) do manage to bring Data in (with a little help from, of all things, Gilbert & Sullivan's H.M.S. Pinafore) and discover Data has merely malfunctioned.   Still, Data's mere appearance has upset the delicate balance of the Ba'ku, since they have rejected technology and seeing an android was highly traumatizing.

Still that is nothing compared to the machinations going on around the Enterprise.  Federation Admiral Dougherty (Anthony Zerbe) and his newest allies/Federation members, the Son'a, headed by Ru'afu (F. Murray Abraham) seem very interested in Ba'ku.  No surprise: the Enterprise crew discover the planet is a regenerative one, where the 600 inhabitants are centuries old and are in great health.  It's a perfect planet for the decrepit Son'a (who constantly need plastic surgery to maintain even the thinnest of health) and Dougherty sees a way to benefit himself.  However, it requires them to force the Ba'ku out and interfere with the evolution of a planet...a violation of the Federation's Prime Directive.  As Dougherty and his minions all but order the Enterprise to not interfere in their own interference, they mount an 'insurrection', consisting of helping the Ba'ku flee to the mountains while they attempt to get more Federation forces to their side...I think.

We discover that Picard's romance with Ba'ku woman Anij (Donna Murphy) meets a sad end, that the regenerative powers of Ba'ku are affecting the Enterprise crew (more on that later) and that the Son'a and Ba'ku are connected in a surprising way.

﻿
Insurrection I don't think is a terrible film.  What it is a remarkably boring film with no sense of danger or menace from anyone.  As much as Michael Piller's screenplay (with a story by Piller and Rick Berman) wants us to think, 'this is a violation of the Prime Directive, the Enterprise has to go against the Federation to keep true to its goals', what we end up getting is basically a very boring people in a one-sided dispute with an equally boring people.

It just had nothing for us to get excited over.  The Ba'ku (whom I keep imagining are really lost Azerbaijanis) confuse a lack of technology with a lack of personality.  They are all so bland and placid that one almost WANTS them to be thrown off merely because it would give them something to do.  It also makes them incredibly dim: I did wonder why it never occurred to them that perhaps given the restorative powers on Ba'ku no one would ever want to take advantage of it.  Granted, I know they live in isolation but then again given they themselves were refugees and given that they had a breakaway group who might want to come back (hint, hint), why the Ba'ku never thought things out is a great mystery.

Oddly, Insurrection actually started out well when Data ran amok.  It might even had led us to some wonderful roads: the android who wishes to be more human either being manipulated or willing himself to give in to the darker aspects of human nature (greed, lust for power).  However, once Insurrection decided to introduce comedy into the proceedings, there really was no way for Insurrection to survive.  We'd already had some bad laughs when Picard is forced to wear some headpiece as part of a Federation reception, but when Picard and Data do a duet from an operetta it was all beginning to fall apart.

There are two reasons for it.  First, when Picard asks Worf if he knows Gilbert & Sullivan, the Klingon's response of "No sir, I have not had time to meet all the new crew members since I've been back," is not funny.  I'd argue it is a perfectly logical response to the Captain's query (to borrow from the Vulcans).  Second, after seeing Data go psycho and shoot all who come across him, the sight of Picard and Data belting out A British Tar is borderline idiotic.  Piller, Berman, and director/co-star Jonathan Frakes must have known that once we had a rousing musical number we'd lose the tension and suspense of whether Data was now evil or merely malfunctioning.

In fact, I would argue that Insurrection is a bit top-heavy with comedy, from a little light opera to Data attempting to figure out the concept of 'playtime' to Frakes' Riker and Marina Sirtis' Troi indulging in a little hot bubble bath sexy-time.  While seeing Geordi (LeVar Burton) regain his eyesight is a plus, seeing poor Worf being made to look foolish by experiencing Klingon acne is just embarrassing.  However, it's not as bad as seeing Troi or Dr. Beverly Crusher (Gates McFadden) discuss how their boobs are firmer on Ba'ku (or seeing Data attempt the same conversation with Worf).  The nadir of course is the brief moment of Picard doing a little mambo.  It's become a brief but notorious moment, and to be honest I did not make the connection between their actions and the rejuvenating powers of Ba'ku.

In regards to the actual heroes and villains, neither are interesting.  Abraham did what he could to make Ru'afo a menacing threat, but he came across as just a nasty landlord who is cross than murderous.  When we get the 'twist' involving the Son'a, I'd argue it wimps them out, as if they were less a major threat to the peaceful Ba'ku and more like whiny kids.

Of course, this is not to say I was rooting for the Ba'ku, a greater collection of wimps and dimwits I've encountered in these voyages of the Enterprise.  Their pacifism is confused with passivity, as they appear adamant in not doing anything to help themselves.  It is hard to be sympathetic to people who speak softly, behave as though everything is rather bland, and do nothing for themselves.  Brings to mind what Orson Welles' Harry Lime said about the Swiss in The Third Man...they are basically cuckoo.  How else to explain why the child Artim (Michael Welch) would actually run back for his SLUG when they are fleeing from a collapsing cave (as if we all didn't know he'd go back to his slug).  I though of the Ba'ku as basically cooler Amish: no technology, no fighting, but more boring.  Particularly bad was Sojef (Daniel Hugh Kelly) the Ba'ku leader/Artim's father.  He was so soft-spoken one almost was hoping the Son'a (who at times looked like Brazil rejects when having their faces stretched out) would win, if only to give A.) either side something to do, and B.) to knock these obnoxious twits out of the galaxy.

There were other things that didn't work in Insurrection.  The menace (oh, the Ba'ku are going to get thrown out...big deal: they don't seem to be too concerned with their fate) didn't work.  The 'romance' between Picard and Ba'ku Anij (Donna Murphy) didn't work.  When Data informs Picard and Anij when exploring the hologram world they would have been taken up to if the Federation/Son'a scheme had worked, "I work as a flotation device," I truly didn't know whether it was MEANT to be funny or idiotic.  Even the special-effects looked a little on the cheap side: I don't think I was suppose to notice it was all computer-generated, was I?

While Star Trek Insurrection attempted to answer what were to happen if the Enterprise ever came across the dilemma of whether to obey orders or the Prime Directive, what it ended up doing was violating an older and more vital Directive...do not be boring.