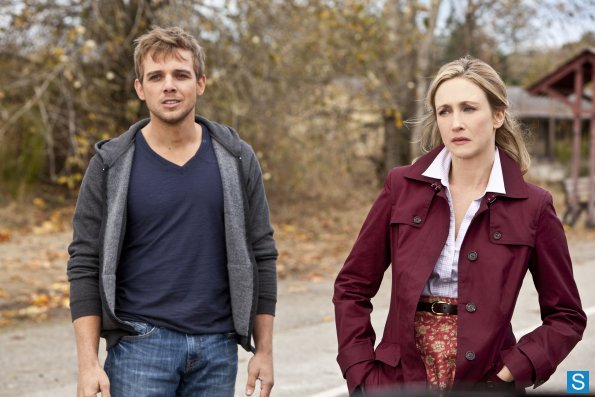 The Bates Will Fit Right In...

Nice Town You Picked, Norma has some pluses and minuses.  It builds up the mysterious our fair village of White Pine Bay has for the Bateses, but it also brings in new characters that are a little clichéd, particularly the newest addition to the Bates family, one Dylan Massett (Max Thieriot).

Dylan is Norma's son by a previous relationship and thus, Norman's half-brother.  He's also your traditional 'bad boy' (five o'clock shadow, serious attitude).  He doesn't care for Norma (whom he identifies as "The Whore" on his cell phone) and is disgusted by how close she and Norman are, convinced she is a control freak domineering his half-brother.  Dylan also doesn't shrink from being involved in criminal activities, which in White Pine Bay are abundant.

The criminal underbelly beneath the small-town veneer is known to nearly everyone, including Deputy Shelby (Mike Vogel).  Shelby, who is attracted to Norma, basically tells her that crime keeps the town going.  If only he knew that the man he and Sheriff Romero (Nestor Carbonell) are searching for is the same one his newest gal-pal bumped off...

As Norman and Emma search for the shack, they find a huge marijuana field.  They manage to flee the men guarding it, but they also find the shack.   That, however, is tame to what Norma encounters at the end...as she drives through town, there is a literal man on fire, the sight of a burning flesh drawing the town's attention.

As I said, the introduction of Dylan is something that divides me.  On the one hand, we might need someone who will bring the criminal netherworld into the already twisted lives of Mother and Master Bates.  However, Thieriot's take on Dylan appears to be a typical young hood.  Even the name 'Dylan' appears to signal that our fellow will be bad news.  However, now that we have a viewpoint of someone who knows our two main characters and can stand somewhat apart from them gives Bates Motel a new perspective.  Dylan knows Norma's secrets (intimating to her that he knows his stepfather did not meet a natural end), and he is the only one who can see that the relationship between Norma and Norman is peculiar.

Now the struggle between Dylan's overt hostility to Norma and Norman's passionate devotion to his mother will be driving so much of series.  In one particularly brutal and shocking scene the brothers fight.  Being older and stronger than the thin Norman, Dylan is quickly able to take him down, warning him not to fight him or he will kill him.  Not dissuaded, Norman picks up a meat cleaver and attempts to strike Dylan down.  Dylan, however, probably saw Norman's reflection and dodged him, then knocked him down.

This scene is vitally important because it shows so much about their relationship and behavior.  Dylan hates his mother, while Norman defends her with passion.  One is the child conceived by a teenager who dumped the father quickly, while the other is the highly-favored son who has an intensely close relationship with the mother. Dylan and Norman, more importantly, both have murderous tendencies: one motivated by hate, the other by love.

We also see that Norma and Norman have a strong but strange relationship.  Norma is dressing in front of her son, which embarrasses him but brings a frustration in the mother only in what she sees as his prudishness.  "Does this top look like I'm trying too hard?" she asks.  "That depends on what you're trying," he replies.

The performances, including new lead Thieriot, are all strong.  Thieriot may be the 'bad boy', the one who is always up to trouble, but he also is the conscious of the family he finds himself in.  He sees that the relationship between his sibling and parent is not normal, far too attached and with "The Whore" domineering and controlling his impressionable half-brother.

Vera Farmiga continues to make Norma a fascinating character, one who is not evil but not good either. Her interrogation of Emma over her illness shows a mixture of caring, curiosity, and suspicion.  Even someone who is seen as not remotely a threat to the Norma/Norman relationship, a girl who does not have a long lifespan without a lung transplant, is met by Norma with barely concealed hostility.

Cooke is also becoming a strong character, both with her intelligence and her humanity.  She is open about her attraction to Norman, but she is also someone who appears to not be corrupted by all the evil overtaking White Pine Bay.

Highmore plays the growing insecurity and confusion of the young man.  The excitement of discovering such things as bondage along with his curiosity over both Bradley and Emma is coming into conflict with his loyalty to Norma, loyalty that confuses the love one has for one's mother into one that submits to her will, drowning himself into the idea that there is them, and then there is the rest of the world, where no one, not even her other son, can enter.

Bates Motel, however, continues to keep the Twin Peaks style going: odd characters, a small town filled with secrets beneath the pleasant veneer, the constant intrusion of dark desires.  What can one say about a town where white slavery, illegal narcotics, and murder are what goes on BEFORE the main characters kill someone?

Also, like another David Lynch creation, Blue Velvet, Bobby Vinton's music is used to make someone oddly creepy.  The gentle confrontation between Norma and Dylan is underscored by This Guy's In Love With You, a most curious song selection for him, even if it was from the previous owner.

Bates Motel is growing to a strong show serving up murder and mayhem, building up the Norman Bates story while expanding his world to where he's pretty much average in a town filled with killing, a slave ring, and pot growing: all the things that make a good home.

Next Episode: What's Wrong With Norman