Who's The Girl You Can't Forget?

It was at the beginning of my self-imposed hiatus that Annette Funicello died.  I was desperate to return and break my fast, but decided that my works really required more time.  Now that I've returned to my blog postings, I figured it was time to pay tribute to Funicello.

The appeal of the Frankie & Annette Beach movies even now, fifty years onwards, is not in the quality of the stories or the performances or songs.  Apart from Beach Blanket Bingo, what songs can one remember from all the Beach films (if one can remember that at all)?  Avalon and Funicello (whom I would mark among the screen's great pairings alongside Mickey & Judy, Tracy & Hepburn, and Powell & Loy) had the appeal of being 'one of us', just two good kids who liked each other and despite one party's occasional foolishness, always found love and laughs among the sand and surf.  It was an uncomplicated romance between the Frankie and Annette characters: he was always a good but dumb guy and she was the wise but long-suffering girl. 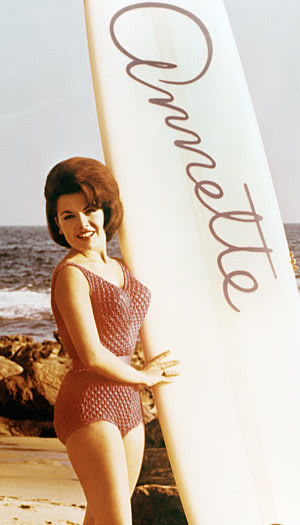 This isn't to say she tolerated being passed over graciously or quietly.  She was nobody's fool and was more than willing to fight for her man.  It was the mix of intelligence and patience what made them (or Annette with another boob boyfriend, whether it was a Dwayne Hickman or her Merlin Jones co-star Tommy Kirk) so wonderful.  The Annette character was never dumb; she just had the misfortune to love someone who was and who almost inevitably needed to be rescued. Still, she did it, because despite it all she still loved the guy.

If only so many of US had girlfriends like that...

If one thinks on it, it is almost impossible to NOT think of Frankie & Annette when one thinks of California dreams of good times while dancing on the sunny seashore.  If the Beach films are dated, square, even camp, so be it: they were unafraid to be innocent, harmless, good times.  Certainly she knew enough that this film franchise was ripe for spoofing, and she was so good-natured she spoofed her own persona in Back to the Beach and still came out looking like she was not only in on the joke but really loved the joke as well.

I don't think it was the innocence of the times that has kept a warm glow on the memories of the Beach films.  It is that there was a genuine sincerity to them: to those who were Funicello's age at the time, that these were 'their' films, the promise of a blissful time with one person who will see you through no matter what.  To their parents, the Beach films showed them that the kids really were all right.  Frankie & Annette weren't going to burn down the house...they were too busy dancing in front of the bonfire by the sea to give anything else much attention.

If one sees the Beach films (and I hope to as part of a larger Great Duos Retrospective),  one can't help but smile to think at how a brunette with a tame one-piece swimsuit could inspire such desire, not for a quickie but for long-term relationship.  I think the larger appeal was that in the Annette character: there was no maliciousness, no danger, no threat.  It is interesting that in a time of buxom blondes her dark bouffant stood out among the reigning goddesses of the screen.  Perhaps that is why Annette Funicello still has a hold on the American consciousness so long after she willingly left the stage.  She wasn't a 'goddess', unapproachable and remote.  Instead, she was what she appeared to be: a good Italian girl who loved life and wanted to be a good wife and mother.

She was perfectly content to let celebrity pass by, using her notoriety only as a pitchwoman for Skippy Peanut Butter and an occasional television film or concert appearance.  In fact, if it were not for a cruel turn in her life, Funicello would have perhaps been best remembered as one of the models for a child star; along with Shirley Temple, Funicello is one of the few child performers (and certainly one of the few from the Disney factory) to which no scandal was ever attached.  No arrests, no convictions, no wild nights and deranged public behavior.

Sadly, it was terrible rumors of public drunkenness due to her increasingly apparent unsteady gait that forced a revelation: America's Sweetheart had multiple sclerosis.  She faced this diagnosis like she face all her life: with grace and courage, using it for good.  Still, to think that someone who was discovered as a ballet dancer, who loved the joy and freedom dance provided, was to end her last twenty years totally immobile is one of the most damnable fates that could strike anyone, let alone a genuinely kind person who never harmed anyone.

It is true: Annette Funicello will never come up in a list of great actresses, or great singers, or great dancers. There will always be glamour girls and bathing beauties, and she may not be on those lists either.   However, if they compile a list of people who exude sweetness, kindness, who are really pretty inside and out, you will find Annette Funicello's name there. If the thought of her dancing away at the beach makes you smile, then she has earned her place if not in film history, then in the hearts of filmgoers, and that immortality, love, and genuine affection for Annette Funicello no disease can rob her of. 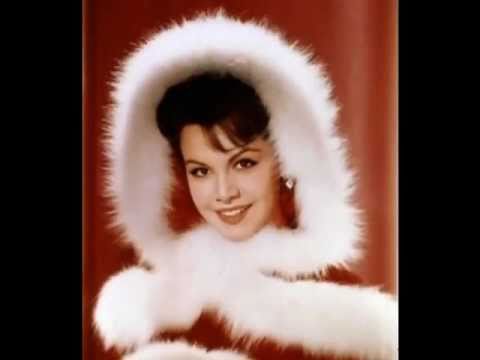 IN MEMORIAM
Posted by Rick at 8:52 PM