Superman and the Mole-Men: A Review 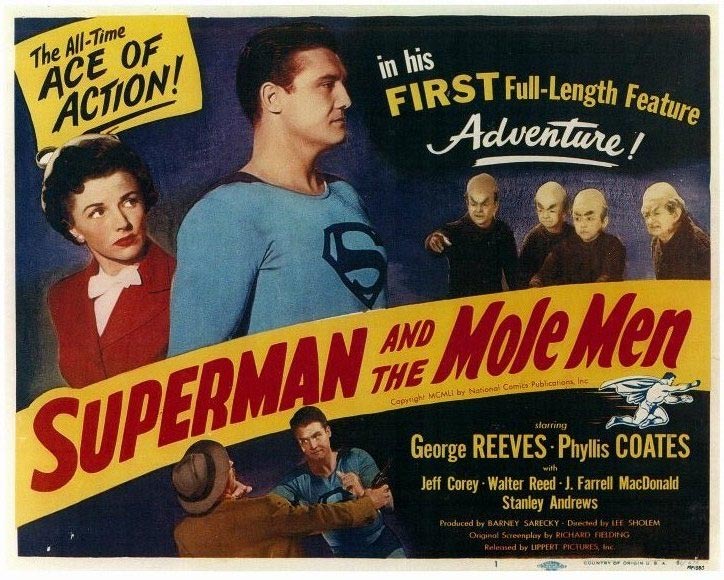 Superman Vs. The Enemy Within...

While Superman and the Mole-Men is not the greatest Superman film, it is in its own way a very intelligent picture, one shockingly provocative for the 1950s.  Using the Man of Steel and the science-fiction elements within its story, Superman and the Mole-Men has a powerful message of tolerance and anti-prejudice within its short running time.   It is very much a product of its time (particularly with a primary element in Mole-Men) but as a whole, despite its obvious low budget, the film is something rare: an intelligent use of sci-fi/comic book elements to serve as allegory.

In the town of Silby (home of the World's Deepest Oil Well) come Metropolis Daily Planet reports Clark Kent (George Reeves) and Lois Lane (Phyllis Coates).  They've been brought by the company P.R. man to bring publicity, but the foreman has been instructed to not only stop drilling but also to bury all the equipment used, some quite expensive.  Kent and Lane believe there is a story here, and soon the story grows to include death.  While going to visit the watchman, they discover him dead, the victim of an apparent heart attack.  Lane though not Clark also sees something frightening: two little 'mole-men' peering at her who scurry when she screams.

The two visitors from below the deep well are now running through the outskirts of Silby, and a mob led by Luke Benson (Jeff Corey) set out to deal with them by shooting first asking questions later.  Meanwhile, a little girl innocently invites the 'mole-men' into her room and begins playing with them, fascinated by how they made her ball glow.  The posse, alarmed by the girl's mother's screams, begins a mad hunt for the mole-men.  Kent first attempts to stop the mob, warning them that the creatures may be radioactive and more importantly, have not harmed anyone.  Ignoring his pleas for calm, it is up to Superman to finally step in and attempt to stop them.  The mob shoots one, but the other escapes.  Superman is occupied by bringing the injured mole-man to the hospital, and the other escaped the burning shack to flee into the earth.

Believing them dead, the mob is angered to learn the mole-man is alive and being treated in the hospital, and they form a lynch mob, leading a coup against the sheriff.   Now the mole-men have themselves returned, this time with a weapon of their own.  Superman disarms the mob and even saves Luke from the mole-men's weapon.  He brings their injured companion to them and they take him back to the earth.  In the end, the 'radiation' turns out to be harmless phosphorescent and the well is destroyed from within the earth, the mole-men determined to keep the terrestrials out.

One thing about Superman & The Mole-Men that one must keep in mind while watching: there is virtually no budget.  The locations don't shift far and in some of the shots the visual effects and animation make it clear things were shot on the cheap side.  Partly noticeable is when Superman rescues the shot mole-man (the string holding the latter up is almost visible) and the animation of Superman flying is obvious.  However, director Lee Sholem should be congratulated for making the budgetary limitations work for Superman & The Mole-Men.

For example, when we 'see' Superman flying over the mob on the way to the little girl's house, we get it from his point-of-view.  In other words, we are looking over the mob as we hear a whooshing sound (which is suppose to be Superman overhead).   It's an imaginative shot and a well-rendered one.

Moreover, what really sells Superman & The Mole-Men is that everyone is taking the premise seriously.  Despite its low budget the performers and the story are concentrating on the story, and if one focuses on the story you'll see that it does two things.

The first is that the film is cut from the same cloth as other 1950s sci-fi features in its fears of 'nuclear radiation'.  Certainly Superman & The Mole-Men did not attempt to break new ground in its 58 minutes and understood that radiation, the terrible threat of nuclear fallout, is something the audience would react to and accept as a cause of fear.

The second and more important thing is that Superman & The Mole-Men serves as allegory to the fear and paranoia underlying the placid world of post-World War II America.  It is very open about how the fear of the 'unknown', particularly that which is different, makes men do irrational even evil things against those who had done them no harm. 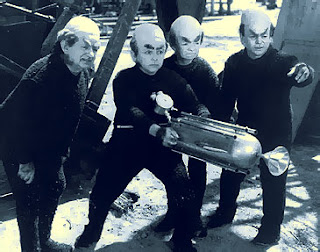 I can't help thinking to other allegorical films like Invasion of the Body Snatchers, The Day the Earth Stood Still or even High Noon when I think of Superman & The Mole-Men.  Now let me set this straight: I'm not saying that it is in the same league as any of those films.  However, by tackling in a subtle way the issues of bigotry, fear, and suspicion of that which is different, Superman & The Mole-Men can be appreciated by adults who can read between the lines.  Superman and Clark Kent both are very much opposed to mob violence.  One of Superman's lines is "It's men like you (meaning Benson) that make it difficult for people to understand one another".  This is almost revolutionary at a time when conformity was desired and institutional racism was still very much in effect.  The scenes of how the Head Doctor wanted the 'mole-man' removed from the hospital because he was 'different' could easily be read to be substitutions for when white hospitals would turn away black patients based solely on the color of their skin.  The heroes were the ones who did not strike first but who wanted to approach the 'mole-men' as equals, not monsters, while the villains were clearly the ones leading the mob and who played on the fears of the citizens to pursue their own agendas.  As I said, High Noon touches on similar territory of the lone man facing down danger, only this time the citizens are actively (if manipulated) into being more dangerous than the outside danger.  The Mole-Men's response of using violence when having violence visited on them similarly almost foreshadowed the militancy of the Nation of Islam and other groups.

It's also curious that in terms of performances, Reeves' Clark Kent is not in any way a bumbler.  Instead, Reeves plays him as less a mild-mannered reporter than as an intelligent reporter, one with his own courage.  Coates also does a strong job showing the evolution of Lane as one who is similarly frightened of the 'mole-men' to knowing that in the end they just wanted to live in peace and be left alone.  Again, there was no winking at the audience except perhaps for one scene where "Clark Kent" almost spills the beans as to his true identity.  No matter how good Richard Fielding's (the nom de plume of Robert Maxwell) script was, there is no getting away from the fact that Lois rarely questions how Superman and Clark Kent are never at the same place at the same time.

As far as Canon goes, the budget made it clear why some characters, like my favorite (Jimmy Olsen) were left behind.  One thing that did puzzle me was that LOIS was somehow made to be the photographer, which I thought was odd.

On the whole, however, Superman and the Mole-Men was a highly intelligent story told quickly and with great moments of allegory as to the dangers of mob violence and the fear and paranoia the unknown can strike at people.  There are certain scenes that even with some clunky editing are actually quite tense (such as when the besieged mole-man is desperate to get out of the burning shack).  The actual mole-men themselves are portrayed rather sympathetically, and Reeves and Coates worked well together, making Lois and Clark (and Lois and Superman) a good team who took their roles seriously.   If it weren't for the B-Movie trappings, Superman and the Mole-Men I imagine would be taken more seriously.

I can hope that the rehabilitation of a well-made and intelligent B-Picture and legacy to the Man of Steel's film career will start soon.