All For A Little Publicity...

After watching Sweet Smell of Success, one feels like bathing to wash all the grime and sleaze off him/herself.  Few films have dived headfirst into the gutter that was (or perhaps is) the publicity gristmill that promotes people and places but which come at the price of personal integrity and decency.  Sweet Smell of Success is an angry film, brilliant, but highly cynical, reflecting the moral morass that the characters in this demimonde of nightclubs and backroom deals to get a line in a newspaper column work in.

Sydney Falco (Tony Curtis) is hustling to get a mention of a club in the column of J.J. Hunsecker (Burt Lancaster), the most powerful gossip columnist around, who with a single mention can make or break anyone, be he mere entertainer or powerful politician.  Falco is persona non grata with Hunsecker because he couldn't do what Hunsecker wanted him to: break up the romance between Hunsecker's sister Susan (Susan Harrison) with Steve Dallas (Marty Milner), a jazz guitarist with the Chico Hamilton Quintet.

Sydney, desperate and angry, concocts an elaborate scheme to get in Hunsecker's good graces.  He would plant a false 'blind item' suggesting Steve was both a drug user and a Communist, then get Hunsecker to 'correct' this smear, but fully aware that the moral Dallas would want nothing to do with the sleazy Hunsecker, reject his offer of help, which in turn would cause Susan to reject Dallas.

The plan starts working well, but once Dallas tells Hunsecker what he really thinks of him, J.J. is enraged to find someone who dares insult his 'readers' (read, Hunsecker himself).  So infuriated is J.J. that he wants Sydney to frame Dallas with drugs and have him 'interrogated' by Hunsecker's sleazy detective friend Lt. Kello (Emile Meyer).  Sydney, who hasn't shrunk from prostituting a cigarette girl he knows (how well we can only guess) and who has done all sorts of sleazy works for Hunsecker, shrinks at going this far.  However, Hunsecker dangles the possibility of Falco taking over his column while Hunsecker is on vacation, and this is a prize too rich to resist.

Still, when Dallas is left at a hospital Falco is struck with a sense of guilt.  Getting a call he thinks is from Hunsecker, he goes to the penthouse to find a disheveled Susie, about to jump from the balcony.  Hunsecker comes in, finds his precious sister in her nightgown with Falco over her, and figures Falco has decided to take Susan.  A highly possessive Hunsecker gets his goons to beat up Falco, but in all this Susan has discovered J.J.'s duplicity.  In the end, she walks out on her brother, telling him she feels not hatred, but sadness for him. 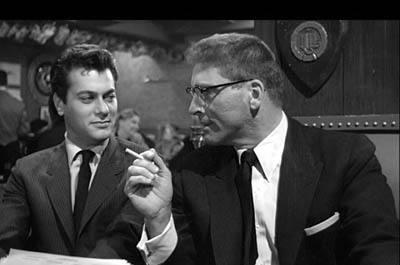 Sweet Smell of Success finds us in a dark and sleazy world, enhanced by James Wong Howe's bleak cinematography and Elmer Bernstein's jazz score, which highlights the urban, noir feel.  This world is dominated by dark, by night, with few scenes taking place during the daytime (and even then we are inside).  It is only when Susan leaves her evil, possessive brother that the film is bathed in sunlight, as if we the audience is allowed to escape the dark night of the city's soul and have a sense of hope.  It's curious that in this world of show-business, of places like The 21 Club and backstage there is an air of grime and sleaze.

While the cinematography and score enhance the film, it is really both the performances and the screenplay by Clifford Odets and Ernest Lehman (based on Lehman's novella) that are the highlights of Sweet Smell of Success.  Lancaster's Hunsecker, a thinly veiled portrayal of powerful New York columnist Walter Winchell, doesn't appear much on the screen, but every time we see him we see Hunsecker as an angry, bitter, evil man.  He has a controlled rage where his arrogance masks his repulsiveness.  From the moment we finally see him, sitting at his usual table where with some remarks he makes clear that he knows he yields great power over the powerful, we see that he will stop at nothing to get what he wants.

What he wants is to control Susan, and he will use the needy, sycophantic Sydney to get him to do his dirty work.  It isn't as if Falco hasn't done favors for him before, but Hunsecker makes clear that he will use his power any way he wants to.  "Match me, Sydney," he tells Falco, holding his cigarette out to him.  Hunsecker has no qualms, no morals, and that makes him all the more dangerous.

Curiously, Sweet Smell of Success strongly suggests (but never overtly states) something almost incestuous in the J.J./Susan relationship.  Hunsecker's intense need to keep Susie away from any man except for him, his desire to keep her with him always, makes it almost appear that there is something grotesque in his fixation on his sister.  It doesn't help that in real life, Harrison was 18 and Lancaster 44 when they made the film.  Never does anyone get the sense that they are brother and sister, but more father and daughter.  It doesn't take away from the suggestion, however small, that Hunsecker, for all his moral uprightness and patriotism, harbors a sickening sexual desire for his own flesh and blood.

However, the real standout is Curtis.  This was his real breakthrough as an actor.  Prior to Sweet Smell of Success, Curtis had gained fame as a 'pretty boy', one whose main attributes were his good looks and easy charm.  Here, we see just how good Curtis was: his Sydney Falco is not just unscrupulous but fully aware of it and not bothered by it.  This is a man who is not above basically offering a good woman to a rival columnist in order to set his plan to cull favor with Hunsecker in progress, who uses inside information to fool a standup comic into hiring him to represent him as his publicity agent, and who would blackmail someone to get them to print the blind item.  Curtis' Sydney is amoral, someone who uses his wits but who is deplorable.  Sweet Smell of Success is really his story, about how he finds himself in this morass of amorality but who discovers that the sweet smell of success is built on quicksand and muck and mud and sleaze.

In truth, it's hard to decide which of the two is sleazier.

The script is pitch-perfect, not just in the story that flows real fast in its remarkably brief running time, but in its crackling dialogue.  "From now on, the best of everything is good enough for me," Falco declares to his secretary.  When Hunsecker at first dismisses Falco, he sneers, "You're dead, son.  You're just not buried".  Later, as Falco sets his plan into motion, he assures his master, "Cat's in the bag and the bag's in the river".  Sweet Smell of Success is an extremely quotable film, and an excellent exploration into the dark side of the underbelly of fame and those who seek it.

This is one of the great films about the power of the pen and those who misuse it for their own selfish and nefarious ends.  The film is brilliant, but we find that the Sweet Smell of Success is a pungent odor.