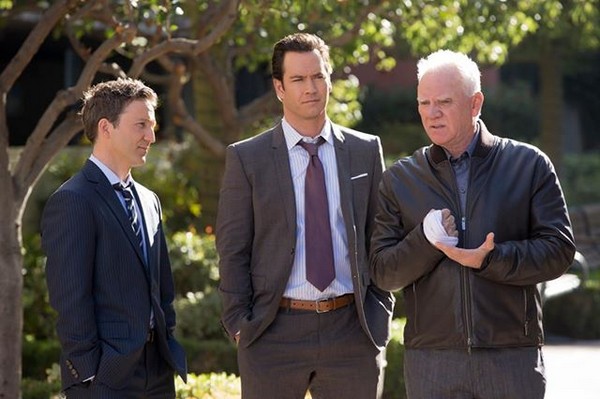 FRANKLIN & BASH:
LOVE IS THE DRUG

The Scent of Love is In the Air...

After having two disastrous episodes, Love Is the Drug is the first good Franklin & Bash story this season.  This, sadly, isn't to say that it is particularly good or engaging, but at least it isn't as horrible.  I think what made Love Is the Drug better than what had come before is that Malcolm McDowell's Stanton Infeld, at least in theory, is there to rein in the excesses of Breckin Meyer's Jared Franklin and Mark-Paul Gosselaar's Peter Bash.

Infeld returns to the firm that bears his name, interrupting the hijinks of a F&B staff meeting (no one can speak without holding a football, with those that interrupt having to run laps around the table).  They have two cases.  The minor one involves Twilera, a prescription sleep medication that apparently has made people do irrational things, like shop in a haze, or with the case the firm has, hire a dominatrix unwillingly and after having wax poured into their rectum they would like a refund.  Enter Ellen Swatello (Rhea Seehorn), the most sensible person at IDFB, who naturally is given this case against her will.  However, once we get a look at the plaintiff, Bob Allen (newcomer Alan Santini), she doesn't mind too much.  The much shorter and less attractive Jared, who still harbors conflicted feelings for Swatello, does mind.  Despite himself he 'accidently' gets their investigator Danny Mundy (Anthony Ordonez) to look in on how Swatello is making out with Bob (read into that whatever you will).

The big case involves Jimmy Lavanos (Derek Miller), a cab driver with an impeccable sense of direction who is being accused of stealing celebrity handbags, with Sadie Juvonen (Carrie Wiita) as his accomplice.  He denies stealing anything and calls upon Franklin and Bash (whom he's driven home after both were hopelessly drunk...again, aren't these guys both 40?) to help him out.  Things don't look good for Jimmy when Sadie, who had gone by an alias when with Jimmy, is located by the boys and at her arrest shouts out that Jimmy made her do it.  Things continue to go bad for our human GPS when she pleads guilty in exchange for information to get Lavanos, but we find that in a way, Jimmy has a chemical imbalance caused by Sadie that renders him disoriented.

Finally, in the actual subplot (since the Twilera case really goes nowhere and is just an excuse to make Jared jealous), Infeld finds himself punching a snooty restauranteur, Dominic (John Michael Higgins), with whom he's had a bitter rivalry going over 20 years over the most idiotic of reasons.  As a way to avoid having charges filed (and not having to pay extortion), Dominic agrees to give Stanton a punch.  However, the ever-wily, ever-bitter Dominic, using a clause in the contract, gets a substitute, none other than Iron Mike Tyson!  Needless to say, Iron Mike doesn't take kindly to having his friends mocked.

I'll admit that the Mike Tyson sequence was funny (especially how the tiny Meyer could think of taking on the champ), but there's something a bit sad that Iron Mike could do better than two actors who have spent nearly their whole lives on camera.  "I do theater now," Tyson at one point yells at them as he walks away, which is true (though at more than $50, I opted not to go to his one-man show when he came to El Paso).  Apart from that a lot of Love Is the Drug was a little flat.

Franklin & Bash's biggest problem, from what I see, is that the show stubbornly refuses to let the boys grow up.  The first season showed how they could be a bit wacky and offbeat but still have some sense to them.  This season, and last season, and the season before that, show they are devolving in mental age.  Nothing really captures this better than when they go to find the photographer who took TMZ-style shots at celebrity events where Sadie was spotted.  At the photo shoot, a beautiful woman comes up to them and asks for their opinion on whether she should or should not wear a bra.  Is it me, or is there something idiotic about two 40-year-old men giggling like horny teenagers looking at the Sports Illustrated Swimsuit Issue when this woman approaches them?  Seriously, I thought, could she not tell that these two 'brilliant' lawyers who have had hundreds of women between them (and in Jared's case, perhaps a few bi-curious moments) were all but drooling over the thought of a braless woman?

That, perhaps may be forgiven, but given that she asked them that because she needed, as she put it, their "Queer Eye" (yet another 'people think they're gay' bit) it's puzzling how this woman could be so dumb.  With their 'drunken vomiting', their 'dart shooting games', their 'wacky meetings', and their giggling over models, Franklin & Bash has got to make our leads either a bit smarter or a bit more mature.  We had a lot of trouble accepting them as 'brilliant' lawyers when they appear to be nothing but goofballs who couldn't put two-and-two together.

In regards to other aspects, Love Is the Drug at least has a touch of the old Franklin & Bash logical insanity to it.  The idea that the Pink Sapphire perfume of Sadie would so set Jimmy off that he basically went haywire may not pass the smell test (pun intended), but at least it isn't as idiotic a reason as we've seen before.  The long and drawn out battle between Dominic and Stanton wasn't particularly clever or amusing (apart from Tyson), and I don't think Higgins did anything that would make us want to rally to his side (has he ever played anything other than 'fussy'?).  However, at least it gave McDowell a chance to look more sensible than he has been in ages (which is saying a lot) and puts him back into the stories rather than being a satellite that floats in and out (physically and mentally).

Poor Ordonez still hasn't been able to make Danny into anything other than downright creepy, even probably psychotic, and nowhere near a potentially good character who is a solid investigator.  With his wild, wide-eye expression (as if he never sleeps, and last time we saw him, he did indeed sleep with both eyes open, making him look even crazier than he comes across), Ordonez's Danny is not winning fans.  It almost seems like Jared & Peter just picked Danny as their investigator because he wandered in and they needed ANYBODY to fill Carmen's place.  Again, I still put the blame on the scripts than on Ordonez, who like the admittedly beautiful Santini (who had nothing to do apart from being beautiful) is starting out in his career.

It's just sad that with Mundy, Franklin & Bash appears to be trying to mix the now-gone characters of Carmen and Pindar into one.  It isn't working, because Carmen and Pindar worked well separately: Carmen's sensible nature to balance Pindar's eccentricities.  Putting two of them into one creates an imbalance that no actor, particularly one who is in the first steps of a career, can pull off.  Even seasoned veterans like Gosselaar or Meyer would have difficulty with Danny Mundy, so Ordonez is given a thankless task.

It's also interesting that with Reed Diamond's Damien Karp missing entirely, we see just how important he was to the show.  He was the antagonist, the prime factor in Jared and Peter constantly 'going against the system', which he smugly personified.  With their main nemesis gone, who really are they going to be dueling wits with?  Our heroes need a figure to fight against, someone who will hinder them.  Stanton Infeld isn't going to do it: he gives them more carte blanche than they deserve.  Swatello is in no position to do it.  Last season's Rachel King couldn't do it (and poor Heather Locklear proved disastrous to the show overall).  Diamond was the only one who could make antagonism against Jared and Peter seem rational, potentially threatening, and at times, even endearing.  He has always had the talent for it, but seeing him gone only shows what a hollow show Franklin & Bash is now (not that seeing both Dana Davis and Kumail Nanjiani gone didn't make that clear already).

Finally, the music was terrible.  It was as if they couldn't help themselves with the musical cues suggesting 'oh, this guy's hot' and/or 'oh, the girl turns him on'.  I get it, thank you very much.  I don't need to have music enhance what I already know.

However, there are some good things in the episode.

Seehorn has softened her Swatello to be less hyper-aggressive and more the level head in a madhouse.   It's too bad that perhaps the best character will be gone too, as Seehorn is going to be in the Breaking Bad pre/sequel Better Call Saul.  Wonder why she would leave Franklin & Bash for something like Better Call Saul?

As far as episodes go, Love Is the Drug happens to be the best Franklin & Bash of Season Four, though only by default (the other two so far being simply horrid).  After two false starts perhaps having Infeld at least try to rein in the boys may pull the show out from being a train-wreck.  It remains to be seen whether Stanton Infeld will turn Franklin and Bash around, or whether Franklin and Bash will instead push Infeld (and the show itself) into the swamp of cancellation.