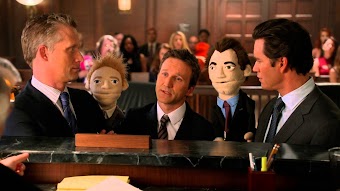 FRANKLIN & BASH:
DANCE THE NIGHT AWAY
The Shorter The Skirt, The Thinner The Plot...

And we're back to Franklin & Bash's slide into embarrassment to all concerned save for Reed Diamond.  Dance the Night Away has some familiar F & B tropes: oddball cases, a far-fetched resolution, dimwitted leads, vague suggestions of homosexual relations between said leads, and strippers!  Excuse me, exotic dancers.
We also get a few things we weren't expecting: a real, genuine human relationship for once acted out as if characters were real adults, the more obnoxious of our two main characters receiving a royal title, and same obnoxious character making out with his best friend's mom.


The main case is brought to you by Colleen Bash (Jane Seymour), Peter's mother the sex surrogate.  She has a friend, Cindy (Diora Baird), who dances at Candy's Strip Bar.  She injured herself when the pole she was performing a particularly difficult routine broke, sending her flying into the lap of a I'm sure extremely pleased customer.  Her knee was injured and she received cuts from broken glass but now not only does the new manager, Cliff (James Remar), refuses to pay for her medical bills, but wants HER to pay for the broken pole as well!  After some discussion, consisting of Peter Bash (Mark-Paul Gossellaar) telling Mommie Dearest they'll discuss taking the case, and Jared Franklin (Breckin Meyer) immediately saying they'll take the case, they take the case.
Oddly, the opposing counsel is none other than Damien Karp (Diamond), who appears to have taken a shine to the boy's new lawyer, Anita Haskins (Toni Trucks), a shine that appears reciprocated.  To the shock of Franklin and Bash, at one point Karp actually manages to beat them in court, pointing out that Cindy was not technically an employee of Candy's, but an 'independent contractor' and thus does not fall under Wrongful Termination protection.  As she worked as a private workout instructor, she had outside work.

Things look bleak for the boys, who appear to have finally reached a dangerous point: not only have they been unable to score with strippers, but may have to do actual work!  The SR-17 Business Tax Forms they are required to fill out are not to their liking, and for once they fondly recall how Karp apparently not only loved doing the forms, but was highly efficient at it.  Could they genuinely miss their nemesis?

One person who genuinely misses him is his uncle, Stanton Infeld (Malcolm McDowell), whose frosty relationship with his nephew appears to be undergoing a thaw on both sides.


In true Franklin & Bash style, they find a way to win their case the way they normally do: set up a bizarre stunt and get others to do the leg work.  While Peter and Jared come up with the idea of unionizing strippers, it is Toni who comes up with the actual union to sponsor them.  The court, in particular Karp, is astonished that even by "Bash and Franklin" standards as he puts it, the idea of having a union of puppeteers sponsor them is idiotic.  As always, they manage to pull everything off.  Not only do they win the case, they manage to get Karp back to the firm, though he comes with conditions...and Peter's mom, who scolds Jared, Peter, and Stanton for how they've treated Damien.

In what can be rightly called a last gasp of desperation to make things 'wacky', due to plot contrivances that stretch the bounds of believability (even by 'Bash and Franklin standards'),  Jared accepts a royal title in lieu of payment.  Apparently in exchange for forgiving legal fees from a Scotsman, Jared Franklin is now, and I'm not kidding, His Royal Highness The Duke of Landingshire.
In his honor, I shall now refer to Elmo 'Jared' Franklin as HRH.
HRH's purchase of the title infuriates Peter, who worked on the case as well and got nothing out of it.  Stanton is delighted, recalling his own youthful trysts with "Lizzie" at Buckingham Palace and offering to throw HRH a Royal Coming-Out party.  However, one person who isn't thrilled is Albert Doherty, Duke of Wetting (Kevin McKidd), who owns property back on the island next to HRH.  He wants HRH to put a stop to Landingshire's cattle getting on his property.