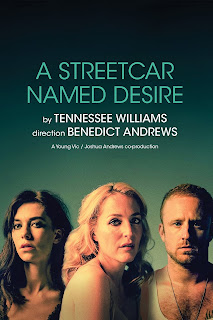 There's crazy, there's psychotic, and then there's Blanche DuBois crazy, and when Blanche goes bonkers, she goes BONKERS!  The National Theatre's production of the Tennessee Williams' masterwork A Streetcar Named Desire, which was broadcast in movie theaters on September 16, goes in two directions: both contemporizes the setting and keeping a more 'timeless' feel of the seamy goings-on in the Big Easy.  With four great performances this version is not without its flaws, but still makes for compelling viewing.

There may be people who genuinely don't know the plot, so here goes.  Blanche DuBois (Gillian Anderson), having lost her family's plantation, goes to visit her sister Stella (Vanessa Kirby), who lives in New Orleans with her husband, Stanley Kowalski (Ben Foster).  Stanley is as uncouth as Blanche is elegant, and there is thinly veiled contempt for the other.  Stanley sees Blanche as an uppity phony, Blanche sees Stanley as an abusive brute.   Certainly there is truth to both perceptions, and Stella is put in the middle of their frosty war.  Hope comes to Blanche courtesy of Mitch (Corey Johnson), Stanley's best friend who is not as harsh as Stanley.  Mitch certainly is enamored of the sophisticated lady-like Blanche, and Blanche in turn sees Mitch as perhaps her last chance at happiness, as her first marriage ended with the young man's death by suicide early in their relationship.

However, things slowly disintegrate.  Stanley learns through people at work that Blanche, far from being this respectable widow, was a virtual nymphomaniac and forced to resign when her attentions went to a seventeen-year-old boy in her school.   This news, which Stan eagerly shares with Mitch, causes a disaster at Blanche's birthday party.  Mitch doesn't show up, leaving Blanche devastated and confused.  When he does appear, she's already slipping into total insanity as her carefully constructed world of 'magic' comes ripping apart at Stanley's hand.  Despite now being a father, Stanley takes advantage of a clearly unhinged Blanche and rapes her.  Stella cannot bring herself to believe Blanche's story (though one suspects she thinks her sister is telling the truth), and the decision is made to send her to an asylum.  As she is collected, Stella is devastated, Stanley does not want to recognize anything's wrong, Mitch is torn, and Blanche, completely divorced from reality, accepting the Doctor's hand, telling him, "Whoever you are, I have always depended on the kindness of strangers".

I think Blanche DuBois is one of the hardest roles for an actress to play.  First, no matter how many revivals and interpretations of our mad Southern belle there will be, all of them will be in the shadow of Vivien Leigh's iconic portrayal of Blanche in the film version of A Streetcar Named Desire (as she had originated the role on the London stage, Jessica Tandy having originated the role on Broadway).  Second, the role is so meaty that a bad actress can amp up the psycho and be so over-the-top it ends up turning Streetcar into a comedy.

Certainly the exaggerated genteel nature of Blanche lend themselves to the possibility of an actress being excessively fluttery and a smelling salt short of getting 'the vapors'; throw in the fact that some actresses simply cannot do Southern accents and Blanche becomes too hot to handle.  I'm from Texas, so Southern accents are not too familiar (Texans having our own manner of speaking), but I have watched The Dukes of Hazzard, so I'm familiar with the dialect.

Anderson, fortunately, did not go for a broad caricature of a grande dame of the Confederacy.  Her Blanche was believable in her delusions, a woman who deep down KNEW the truth but as she put it, didn't want reality but magic, things as they SHOULD be rather than how they were.  I found Anderson's Blanche to be highly vulnerable, someone who yearned to be the belle she wanted to but found that those things were long gone.

As a side note, I never believed she truly was a nymphomaniac or a slut.  Rather, how I see Blanche is as a woman who had her dreams of love crushed by her husband Allen.  I think it wasn't overtly spoken, but Allen, this great love of Blanche's, was homosexual and killed himself over the fact that he was gay and married to a woman but having an affair with another man.  Her late husband she describes as 'the boy who 'wrote poetry'', which is as odd a euphemism for 'homosexual' as I've ever heard, and given it was created by Tennessee Williams (who was openly gay), that's saying something.

This destruction of her romantic ideals, I think, destroyed Blanche, and all those sexual encounters were not because she wasn't this refined woman or because she was being hypocritical.  I think being with so many men, down to the seventeen-year-old boy she seduced as a teacher, was a way for her to drown her sorrow (as if the booze wasn't drowning her sorrows already).  She yearned for that company, for MEN, for validation as a woman, and I've always thought her numerous affairs were a way to empty the loneliness.

To rely on the kindness of strangers. 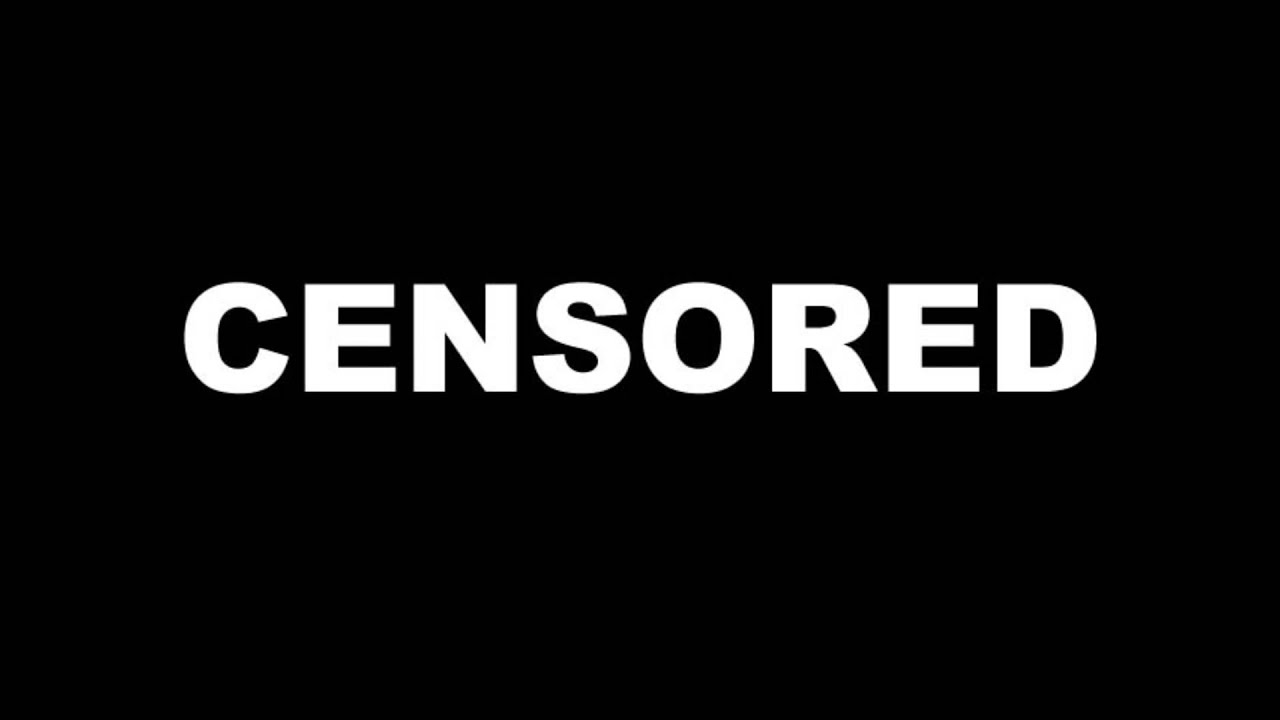 Anderson is sensational as Blanche, bringing a painful vulnerability when she's completely lost it, but she is also arrogant and snobbish in regards to Stanley.  In turns flirtatious and refined, Anderson controls herself even when she's cuckoo.  She's not hypocritical, but honestly critical.

In a similar vein, any actor playing Stanley has to face Marlon Brando's long shadow.  Here too one runs the risk of being excessively brutal without a hint of humanity.  Foster, with his small eyes and muscular frame to offset his short height (at 5'9", the same height as Daniel Craig I should point out), gives Stanley a great vulnerability masking his harsh behavior.  When Blanche is going on about how Stanley is something like an ape, we see a bit of genuine hurt and confusion about Blanche's summation of his character.  As he crawls towards Stella after their fight, we see that perhaps Blanche's ideas are not far from the truth: he looks and behaves like a dejected animal, surrendering to the bestial part of his nature.

Foster even manages to bring in a bit of lightness whenever he keeps declaring he has an expert 'friend' who can examine whether something is accurate and on the level of the Napoleonic Code he's going on about.   Foster is simply an actor who should act more and personally I blame the failure of X-Men: The Last Stand (where he was Warren Worthington III aka Angel) for the bad turns in his career.  It would have been his breakout role, but it didn't, and somehow he's been relegated to 'tough guys', which is a shame since his performance in Ain't Them Bodies Saints showed he could play soft effectively.  His ability to bring softness with that tough exterior is what makes his Stanley Kowalski a fine turn.

What I really enjoyed were Kirby and Johnson as Stella and Mitch respectively, particularly Johnson.   He makes Mitch someone who is taken by Blanche and genuinely cares for her, but who is also devastated by her shocking past so at odds with his own idealization of Miss DuBois.  Still the intense conflict raging within him about his feelings towards Blanche, coupled with his ability to be both working-class and slightly above the mire of the world he lives in makes Johnson a great version of Mitch, about the only character with redeeming values. I think director Benedict Andrews did a great job in how he helped the actors craft their roles, and in some of his musical choices.  We hear Wicked Game when Mitch and Blanche end their date, and I think it suggests that they were intimate, but the lyrics to Chris Isaak's song are fitting: Blanche was playing a 'wicked game' in how she was with Mitch.

If I were to find some faults with the production it would also relate to the music.  Sometimes the music is too loud to where I had to cover my ears, and the balance between the traditional slow jazz of 1940-50s South and a more contemporary sound doesn't always hold up.

I also wasn't a big fan of the spinning stage, which at times blocked the performers.

However, on the whole this production of A Streetcar Named Desire is a showcase for Anderson, Foster, and Johnson, who have found success in the U.K. despite being Americans.  They'll never be able to knock out the versions of Leigh and Brando, but Anderson and Foster give us excellent portrayals of these two iconic figures.