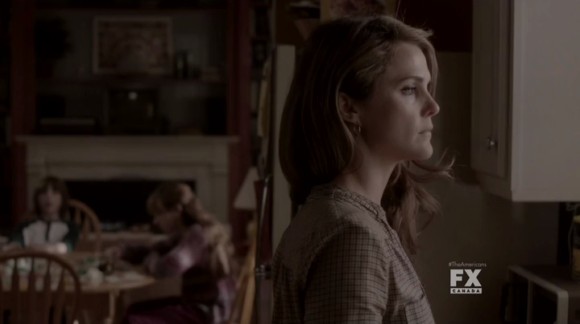 Cardinal is the episode where we see just how much the roles the Jennings have played all these years are finally affecting their work as KGB agents.  After the shock and horror of Comrades, Cardinal keeps the story moving forward, but we also see that the normally rigid Elizabeth (Keri Russell) has been shaken to the core of her being, finding a growing paranoia over the protection of her own children.  She now has to struggle over whether her role as a mother will trump that of a spy, and of whether she can maintain that balance.

Elizabeth is minding the kids, Paige (Holly Taylor) and Henry (Keidrich Sellati) while Philip (Matthew Rhys) investigates Fred (John Carroll Lynch), the man who brought their friends that information that got them and their daughter killed.  Fred is absolutely terrified about everyone, but Philip, who literally got 'the shock of his life' with Fred's booby-trapped box, takes a lot of convincing to see that Philip is on his side.  Fred tells him that they are all in a race against time to find out the submarine information he was handing over.

Elizabeth, for her part, is growing more and more fearful about what could happen, seeing danger everywhere.  A road crew repairing the street across from the Jennings' home may be something else, something more sinister, something that will kill her children.  They don't know much about what's been going on in the Rezidentura.

Bruce Dameran, who works at the World Bank, has walked in, offering his services to the Soviet state.  Double agent Nina (Annet Mahendru) offers this little tidbit to her minder/lover, Stan Beeman (Noah Emmerich), who is excited in every way possible.  Nina, by now bitter towards Stan because of his killing of her friend Vlad, has turned cold but with him, she still whispers sweet nothings, playing a game she may not be able to control.

Cardinal gives us great moments.  A particular highlight being Philip's breaking into Fred's house.  The tension of whether he will be discovered is heightened when we hear Fred's approaching car followed by Philip being literally stunned by the trap.  We know there's no way out for him, so we are left with great tension as to what will happen.  Having Philip face up against a gun, tied up, and powerless make this more intense.

What Cardinal also has is how it treats the two main female characters.  By now, we find the roles slightly switched.  Nina, who appeared to be truly falling for Stan, has become cold and emotionally distant.  In voice-over, we see just how detached she has become.  We hear her type out a report, where she coldly describes how she orally serviced before she allowed Stan to penetrate her (her words).  Mahendru I don't think has done better to make Nina into someone who has died a little bit.

Russell, on the other hand, has shaped Elizabeth into a woman for whom the State, for the first time, has taken a back seat to being a mother.  Russell's Elizabeth has grown more paranoid and fearful about the safety of Paige and Henry, and every little thing, no matter how innocuous, sets her off into panic.  She still has the power to rally (as she did when she helped a junior agent with her target) but by and large she is now a fully-committed mother, one who now realizes just how in danger her children are.  Oddly, it is Elizabeth, the parent who has struggled to be close to her children, who is the more haunted and emotional one, while the more tender Philip is the one who wants to see things rationally.

I say 'wants to' because at heart he too is haunted by what happened not just to their friends but their children: one dead, the other orphaned, unaware of what his parents were.  Will the Soviets really take care of Paige and Henry should something happen to Elizabeth and Philip?  What will be the effect on the Jennings' children to find out the truth (if they were ever to find out)?

Cardinal also is giving us great teasers for the season.  We have Oleg (Costa Ronin), who has little interest in work but may be playing a longer game, and we have the espionage that Philip and Elizabeth are now taking over for the Connors.  Nina's relationship with Stan is also going to play a major role, as that of Dameran.

I don't think anything will top Comrades, but Cardinal continues to make The Americans an intense and brilliant show.

Next Episode: The Walk In
Posted by Rick at 1:47 AM