All Bets Are Off.  Hopefully This Show Will Be Too...

It's interesting that in Red or Black, Franklin & Bash's fourth season finale, the show goes where F&B has not gone before: into cliffhanger territory. Every season finale prior, at least if memory serves correct, pretty much ended whatever story threads going.  Last year's season finale, Gone in a Flash, was actually quite pleasant, a return to the frothy light-spirited nature of the show.  Red or Black however, appeared to be almost begging me to want to know what happens next season (i.e., keep wanting to watch).

It's rather odd that Kevin Falls and Bill Chais are making such a naked appeal given that ratings for Franklin & Bash have fallen, the quality of the show has fallen, fans have fallen away, and in general Franklin & Bash has turned into one of the worst shows on pay television.

I'd gladly give TNT for TCM (I'm a DISH customer, but that's for another time).

Last time, Stanton Infeld (Malcolm McDowell) received a strange message.  Now he shares this with his two himbo attorneys, Peter Bash (Mark-Paul Gosselaar) and His Royal Highness Elmo, Duke of Landingshire, formerly known as Jared Franklin (Breckin Meyer).  He's asked them to come to Las Vegas and bring him a package he keeps in his office safe (which is voice-activated by Stanton's whistling of Beethoven's Ode to Joy.   They were given specific instructions NOT to open the case, but their investigator Danny Mundy (Anthony Ordonez) opens it, to find money and passports.  Is Stanton going to make another run for it?

NO...he needs the cufflinks he left there because he is going to die.  When he was six a family seer named Bakti predicted his death.  "He foresaw my death in the City of Sin in my 66th year, at the mercy of a Noble Fish".   The big surprise from this prophesy is that Stanton Infeld is only 66 (in real life, McDowell is 71).  As all the other prophesies have come to pass (including when Bakti foretold that Stanton would end up killing his partner on a mountaintop, something not mentioned that first season oddly enough), he has decided that indeed he will die in Las Vegas by eating that Japanese fish that is poisonous if not prepared properly.

While Peter and HRH try to talk him out of this, they and Danny decide to make the most of their time in Vegas by hitting the tables.  To their great delight and surprise, they score big on the roulette table, even winning a rare Elvis-played guitar.  However, to their shock they are hauled into what is called The Blue Room and accused of counting cards via The Wong Method (one of them loses small while the others, benefitting from his tips, win big).  They are invited to plead guilty to a minor charge and never return to Vegas, but this means not being able to stop Infelds' impending death.  It is now up to Peter and HRH to get out of their dilemma and save Infeld from himself. 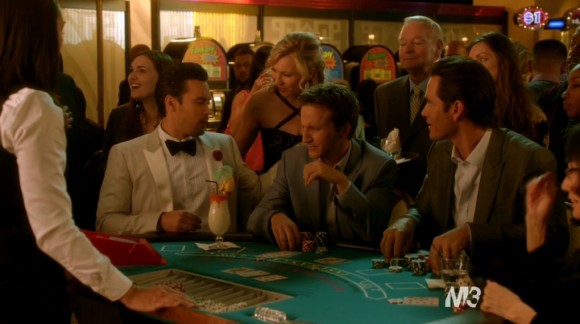 In the subplot, Anita Haskins (Toni Trucks) and Damien Karp (Reed Diamond) have decided to make their feelings public and ask Human Resources for permission to date.  This gets complicated when they find themselves on opposite sides of a copyright case where an artist's mold of his penis becomes the point of contention.   As Karp observes, this is a 'pervy Sophie's Choice' because while Anita and Damien want to cooperate, they find their own needs to win get in the way.  Anita tells her coworker Swatello (Rhea Seehorn) about Peter and HRH's trip to Vegas, snidely asking, "You think they'll finally get married?" (the first of two almost obligatory gay references).  In an uncharacteristic move, Swatello goes to Vegas, perhaps to stop HRH from possibly marrying Bonnie, the former intern he was hooking up with last time.

Peter is so desperate that he does the unimaginable: he calls KARP for help with his uncle.  In the end, Peter and HRH do find a way out thanks to Danny's former time at another affiliated casino (despite Danny's confession that he was indeed counting cards without them knowing).  Infeld is at first relieved that the prophesy has passed him by, and he also bonded with his nephew.  As he enjoys a rare respite, he begins chocking...on Noble Fish Nuts.

For their part, the boys have their own decisions to make.  Will Jared and Swatello really try to have an adult relationship?  That would be difficult, since HRH thought you gave mouth-to-mouth for poisonings and panic attacks which Peter was suffering from (the second semi-obligatory gay reference).

Will their hijinks continue?  That is in doubt, for Peter just received notice that The Chive wants them to be their legal counsel, but that means moving to Austin.  In what can be called the only real twists of Red or Black, PETER wants to go and basically keep the party going, but JARED wants to stay in Los Angeles and be more establishment.  They put their future on the table: red means probably Peter only will go to the Chive (it doesn't look like Jared will go with him), black means they stick with the firm.  As the wheel starts spinning Jared tells Peter, "I love you, dude."  Peter replies, "I love you, too".

I gotta give Franklin & Bash credit for this.  Red or Black did acknowledge what I've been saying for some time: the suggestion that Jared and Peter share 'the love that dare not speak its name'.  There was Anita's comment about Jared and Peter perhaps finally marrying, and there was their declarations of mutual love.

On this point I find it a bit odd and sad that two men cannot share an intimate bond without others thinking it is an intimate sexual bond. I tell my best friend Gabe that I love him without thinking anything of it many times, and he tells me he loves me too.  We're two happy heterosexual men but for my part I have never found telling him that I love him difficult or uncomfortable.  Why Peter and Jared's declaration of mutual affection after a lifetime of friendship might be seen as a great ending is therefore a bit lost to me.

In short, Jared and Peter telling each other that they love each other just when they might actually be ending their longstanding association isn't as dramatic or moving as Red or Black wants it to be.

I also have to give them credit because when I heard Infeld was going to be killed by a 'noble fish', my first thought was that Damien Karp was somehow going to accidentally kill his uncle.  Karp has killed someone accidentally before, but at least Red or Black didn't go that route, so that's a plus.

It's curious that Red or Black though kind of limps along a bit in doing what other F&B episodes have done before.  The boys come up with an absolutely idiotic strategy (blame Vegas itself for inducing gambling!) only to have a most fortuitous turn give them their out (The Desert Opal Casino where Infeld is staying and putting the boys up happens to own the Golden Oasis Casino as well, where Danny was known as a gambler, thus showing that the D.O. knew what kind of figure Danny was and let him play there anyway, undercutting their 'shocked' reaction to the card counting).  Even the bit about Danny's real name being Eliezer Mundy (Dan being a nickname) is something that Franklin & Bash has used before.

In Waiting on a Friend from Season Two, we discover that Jared's real name is Elmo.  However, the 'Elmo' bit has pretty much never reemerged.  However, we get to find out Danny's real name is Eliezer.  Now THERE'S a shock!  How many times are we going to get name changes on this show?  It's curious thought that while Danny is named in court as "Eliezer Mundy", HRH is called "Jared Franklin", not "Elmo", and that apart from maybe one episode no mention has been made that he now is suppose to be His Royal Highness the Duke of Landingshire.  I know this is Franklin & Bash, but would it be too much to ask for a little continuity?

In regards to other matters involving Red or Black, does it seem so remarkably rushed that HRH and Peter can't really discuss what their choices will be regarding whether to Chive or not to Chive?  This is a major decision for both of them, and while I wouldn't put it past them to decide based on where a ball lands does it still feel like it was put there for no other reason than for 'drama'?  I did find it amusing and accurate when Peter said the Chive wanted them because they "have the perfect emotional makeup for the company".

Read anything you want into that statement.

Sadly, there is no mystery when it comes to the Ellen Swatello storyline regardless of whether Franklin & Bash is picked up for a fifth season (which if it is, I suspect will be its last).  Seehorn (an actress who I think has been one of the few standouts in this dismal season of a very weak show) is already in greener pastures (and must be kissing her agent's picture the way others kiss images of saints): she is currently filming the Breaking Bad prequel/spinoff Better Call Saul, and if anyone wants to tell me why Seehorn would dump the AMC show based on the critical cult hit for something like Franklin & Bash, I'm all ears.   Looks like there will be no Ellen, Duchess of Landingshire anytime soon...

I was also put off by the fact that Jared and Peter weren't too perturbed that Danny was counting cards (or that they were really too stupid to not realize their winning streak was too good to be true or wouldn't attract any attention).  What, haven't they seen 21 or Casino or Las Vegas any other Vegas-based show/film where those who are winning big are usually hauled away because the casino suspects they're cheating?  I guess Falls and Chais have, otherwise we wouldn't bother with this cliché.

It's also curious that in a small role, Fernando Rivera as a valet greeted HRH by telling him, "Welcome back," to which a puzzled HRH claimed never to have seen him before.  If the valet had greeted DANNY, we would have had a clue earlier that might have absolved the boys from the charges, but why have the valet greet JARED.

I see them as a couple of himbos with law degrees who are really sad and not the amusing figures I knew four years ago.

Even the subplot of Anita and Karp was lacking because the entire story was predictable. To their credit, Trucks and Diamond made things as interesting as they could.  Trucks came out best and I'd rather watch a show/episode about them rather than Jared and Peter.  They made what little they had work, which is something I can't say about poor Ordonez, who floundered with a character whose only characteristic is 'quirky'.  In his defense, not many actors could do much with what Ordonez was given, so it's not a slam on him.

For me, the big surprise in Red or Black was that, given how these two are, their behavior in Las Vegas was remarkably tame.  In all other respects (the lack of intelligence, the lack of enjoyment, and just lack of everything), we get what we're now used to.  A bad episode where few people really care whether the ball lands on Red or Black.

I do have some advise for Breckin Meyer and Mark-Paul Gosselaar.  Boys, ultimately you forgot one of the best pieces of advise ever given...

Next: The Complete Fourth Season Review