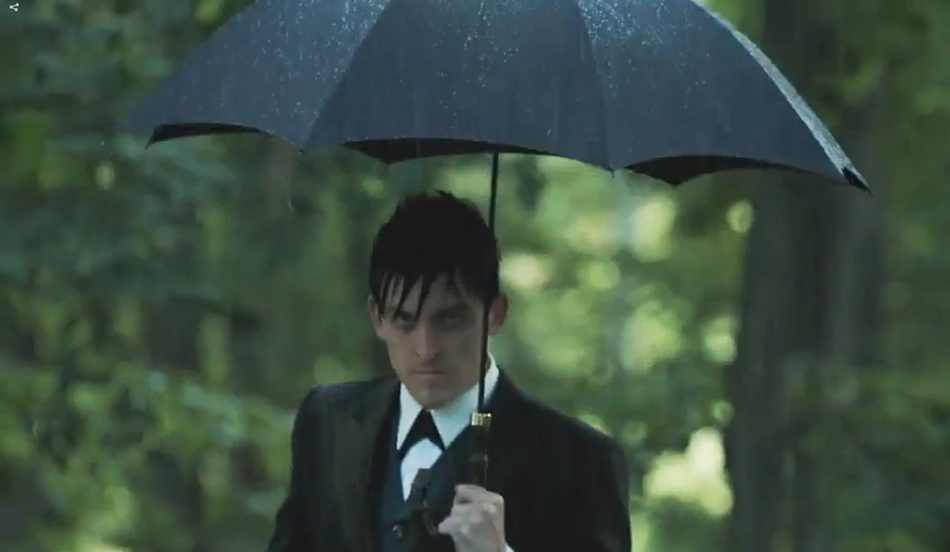 I'm at a disadvantage in that Victor Zsasz from the Batman mythos is completely unknown to me.  Therefore, his appearance on Penguin's Umbrella is something I can't jump with glee over.  However, Penguin's Umbrella didn't make him the focus of the episode.  The actual story where both the repercussions of Oswald Cobblepot's sudden reemergence as well as his intricate master-plan were the main matters on this Gotham episode.

Oswald Cobblepot, aka The Penguin (Robin Lord Taylor) is very much alive.  This news sends shockwaves through Gotham City.  EVERYONE, it appears, in enraged at Detective James Gordon (Ben McKenzie).  His partner, Harvey Bullock (Donal Logue) is furious that he was deceived about Gordon pulling the trigger and fears that now mob boss Falcone (John Doman) will go after both of them.  Falcone's underling, Fish Mooney (Jada Pinkett Smith) is equally enraged: not only did Gordon NOT do as he was told, but Cobblepot, whom Fish especially despises, is still out there, a loose cannon that could blow up in her face.  She wants someone to bring Gordon to her...still breathing.  Her aide Butch (Drew Powell) is waiting at Gordon's place, holding Jim's fiancée Barbara Kean (Erin Richards) hostage.  Gordon makes quick end to that threat and pushes Barbara to flee.

Gordon is persona non grata at the police station, so when Falcone has Zsasz (Anthony Carrigan) come to the station to collect Gordon, all the cops leave him unprotected.  Though Captain Essen (Zabryna Guevara) offers to stand by Gordon's side, Gordon tells her to leave.  A shootout injures Gordon, and before Zsasz takes Gordon, Jim is rescued by his former nemesis Officers Montoya and Allen (Victoria Cartagena and Andrew Stewart-Jones).  He is taken to a vet friend of Allen's, who patches him up but Gordon, stubborn as ever, is determined to get Zsasz.

Mooney for her part, wants Penguin taken out.  Falcone doesn't seem too perturbed that Cobblepot is still alive, and is actually eerily calm about the whole thing.  Mooney and her lover Nikolai (Jeremy Davidson) argue about whether this is the time to overthrow Falcone, with Mooney urging caution.  For his part, Falcone's rival Sal Maroni (David Zayas) won't give Penguin up.  He's grown fond of his "golden goose", though Maroni sees that a war will not be good.  Maroni's right-hand man Frankie (Danny Mastrogiorgio) dislikes Cobblepot and wants him out of the way, but so long as Don Maroni has Penguin's back he can't do anything.

Penguin gets the OK to send a message to Falcone.  Cobblepot uses his knowledge of Mooney's operation to strike at a warehouse, where Nikolai is conveniently killed off.  Also bumped off?  Frankie, who finds that there is no honor among thieves, and that he simply is too cheap with his own minions, giving Penguin the perfect opportunity to wipe out his own rival.

The dons make a deal: there will be no war.  In exchange for allowing Maroni to keep Penguin (and having him and Fish play nice) Maroni will give Falcone control over Indian Hill, a piece of land in the Arkham development site Mooney insists is worthless but whom Falcone says there is no such thing as 'worthless land'.

Meanwhile, Gordon has decided to use the law to take down both Falcone and Mayor James (Richard Kind).  It's an insane scheme, but in comes Bullock to his help, deciding that since his life is basically over, he might as well join 'the good guys'...once he crashes at Jim's place, drunk, hooker in tow.  Once at Falcone's mansion, where they take a very unwilling Mayor with them, Falcone coolly informs them that he will let them both live.  However, Falcone also tells Gordon that he has Barbara and will not hesitate from slitting her throat.  Does he really have Barbara, or is this a con? Bullock urges Gordon to call Falcone's bluff, but Gordon won't take the risk.  Good thing too, since Barbara, dumb as ever, had returned to Gotham to plead for Gordon's life and is being held hostage...AGAIN!

At the end, we see Penguin waddling up to Falcone, but it's all good.  They have been working together, going all the way back to the beginning.  As Falcone was ready to have Cobblepot killed, Oswald makes a deal with Falcone: if Cobblepot is allowed to live, he will be Falcone's inside man in the Maroni organization.  To secure this, Cobblepot asks that Gordon be the one to execute Oswald.  Penguin figures Gordon is too honest a person to go through with it, and Falcone accedes to his request.  In exchange, Cobblepot gives Falcone the inside tip that Mooney and Nikolai are lovers and are planning a coup, information Falcone is pleased to hear about.  Falcone compliments Penguin for how well his predictions have come to pass, but thinks it's a bad idea to keep Gordon alive.  For his part, Penguin tells the don that one way or another, Gordon will see the light.

Penguin's Umbrella has a lot to compliment.  In particular, we see what Gordon can do when he becomes if not unhinged at least devoid of fear.  He is going to take down people without any sense of fear except when it involves Barbara (and more on that in a bit).  He is going to try and single-handedly take down all the corruption around him, and if he dies, he dies.

It's that loss of anxiety that allows McKenzie and David Mazouz's Bruce Wayne (in basically a cameo appearance) a wonderful moment (more on Mazouz's part than on McKenzie's).  Gordon goes to Bruce to tell him that he might not live to solve his parent's murders.  Bruce insists to not be talked to like a little boy, but he IS a little boy, right down to the impromptu hug Bruce gives his quasi-father figure.  It might be unnecessary, but it's a beautiful moment.

Penguin's Umbrella really has top-notch performances from nearly the entire cast (both regular and guest stars).  At the top, like always, is Robin Lord Taylor as Oswald Cobblepot.  He is simply brilliant in how he has Penguin be the master manipulator and the slightly sniveling henchman.  After Maroni calls Penguin his 'golden goose', Penguin responds by saying "Honk Honk", whose meaning is temporarily lost on Maroni and Frankie.  It's almost a comedy moment, but RLT plays it so well.  Penguin is ruthless and dangerous, however, when he confronts Frankie about how his love for money has basically cost Frankie his life.  There's a coldness and calculating nature to Penguin, and RLT again shows how dangerous it is to underestimate him.

Dorman is equally excellent as Falcone, who like Penguin is playing a long game.  Rather than  having it as a struggle between Penguin and Mooney, it's shaping up to be a struggle between the wise don and the wiseguy Cobblepot for control.  Logue is also giving better and better performances as Bullock, who is shifting from a mere crooked cop into a more complex and conflicted person.  Even Pinkett Smith's Mooney, who veers into camp from time to time, has her moments where that camp is toned down to be genuinely menacing. Carrigan's Zsasz is menacing enough and I figure close to what the comics have established, and what's good is that the door is left open for him to make a return appearance.

However, poor Richards as Barbara.  We have to wonder about her intelligence if she gets held prisoner TWICE!  Perhaps this is because Barbara is Gordon's weak point, but geez...why have her as a hostage on TWO occasions?  Having Zsasz's phone ring Funkytown is a curious choice, but in other respects Penguin's Umbrella does music quite well.  The double meaning of listening to Misty play when Barbara is confronted THE FIRST TIME is brilliant (we hear the opening lines to the song..."Look at me/I'm as helpless as a kitten up a tree" which is a sharp way of describing her situation and oddly fits into her WASP world).  The music for Oswald Cobblepot is also so well done.

If anything, I think the whole "Barbara is perpetually a hostage" business pushes Penguin's Umbrella down, but apart from that I think the episode continues to be a strong showcase for the actors and Gotham as a series. 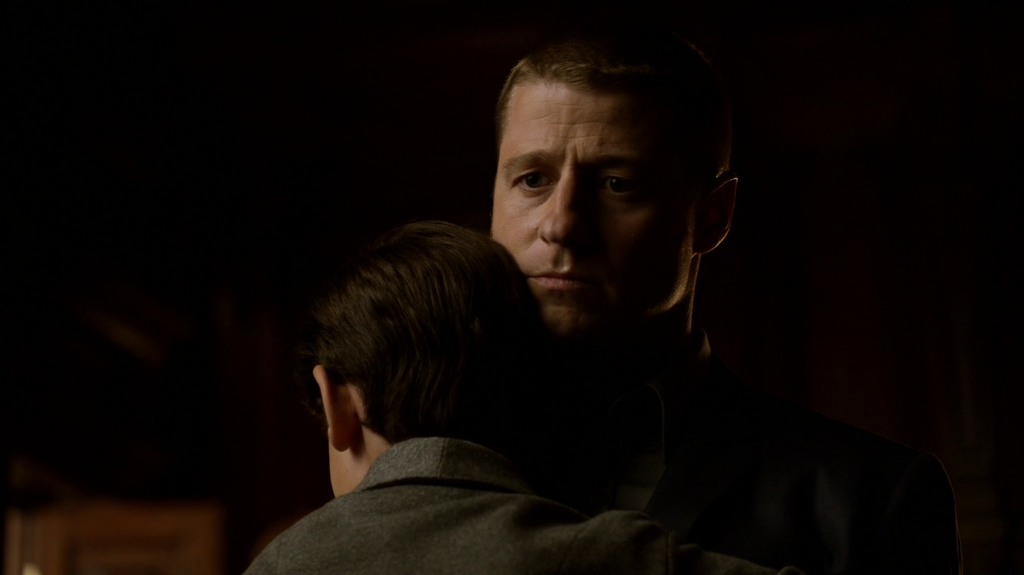