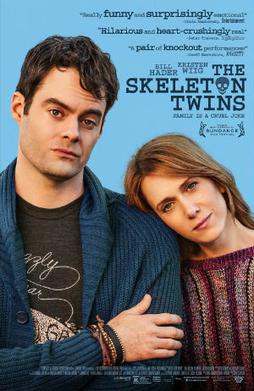 Brothers and Sisters and Other Odd Pairings...

I never thought much of Kristen Wiig (being one of the few people who genuinely disliked Bridesmaids and thinking it a step back for women in film, not a step forward).  I do think better of Bill Hader, who not only does a great job as host of Turner Classic Movies' Essentials, Jr. but whom I thought was one of the best cast members of recent Saturday Night Live.  However, I don't think I gave full credit to either of them for the depths of their talents.  The Skeleton Twins proves their is more to Wiig and Hader than their sketch comedy.  I don't want to say that just because they played 'drama' they are now 'better'.  It's more of an awakening, a chance to see how deep they can dig into characters and reach a higher level than most would have immediately given them credit for.

Milo and Maggie (Hader and Wiig) have had a tumultuous relationship, and it has been ten years since they have spoken to each other.  If it weren't for Milo's attempted suicide they wouldn't be speaking still.  It isn't because they had a major falling out.  Rather, it is because they have drifted apart and grown too concerned with their own lives.  Maggie, for example, was about to down an overdose of pills when she gets the call about Milo.  In order to help Milo recover and perhaps to bond, Maggie has Milo come live with her and her chipper husband Lance (Luke Wilson).  Lance is a guys guy, but he's perfectly cool with Milo's homosexuality.

Milo, for his part, now back in his hometown, wants to reconnect with Rich (Ty Burrell), his former English teacher who was his first love affair despite being 15 when he and Rich had their brief but passionate romance.  Rich, who has a child and fiancée, doesn't really want to start up again but still succumbs to temptation.  Rich is not above peddling his rom-com script to Milo, who has told him he has an acting career when he really doesn't.  Lance, for his part, is enthusiastic about the possibility of being a father, unaware that Maggie has secretly been using birth control and has had affairs with all her continuing education instructors, the latest being Billy (Boyd Holbrook) the hot Australian scuba instructor.

Things appear to be going well for both of them.  They are slowly bonding.  Maggie feels conflicted about both the possibility of getting pregnant and her affairs, which she hasn't before.  Milo is putting himself together with a job that Lance gets him (though he isn't enthusiastic about it).  He and Lance are even bonding.  However, all things start coming apart.  Maggie is furious that Milo is seeing Rich, whom she calls a child molester for taking Milo's virginity.  Milo in turn suggests to Lance that he isn't impotent, but that there's perhaps another reason Maggie hasn't gotten preggers.  Eventually they break apart when Lance discovers from Maggie both of her birth control and infidelities.  She now is about to kill herself by drowning in the pool where she's been taking the scuba lessons, but Milo comes in time to save her when she can't break the ties to the weights she put down.  At the end, Maggie and Milo put their differences aside to attempt to live together, realizing they need each other more than the other is willing to admit.

Perhaps I'm getting soft in my old age, but rather than finding Milo and Maggie narcissistic and faux-hipster, I found them to be inflicting pain on themselves.  The Skeleton Twins attempts to tie their own rather confused lives with their father, who committed suicide himself when they were young, and a brief visit by their hippie mother Judy (Joanna Gleason).  Judy comes at Milo's request, though this clearly upsets Maggie.  It makes things worse when we find that Judy came merely because she was nearby at some meditation-type retreat rather than to see her dysfunctional children.

As perhaps as Mark Heyman and director Craig Johnson's screenplay plays with what would be certain clichéd plot points (the 'I'm screwed up because my parents were' bit and the overt symbolism of the dead goldfish for the siblings tortured relationship for example), The Skeleton Twin's great saving grace is in the performances.  At the top of the list of fantastic performances is Bill Hader's Milo.

In other hands, the gayness of Milo might have come off as stereotypical, but Hader made Milo into someone who straddled caricature with heart.    Yes, Milo is gay, and at times he can come across as flamboyant, but Milo is also someone who has great wounds that are removed from his sexuality.  Hader has a fantastic monologue where he talks about Justin, a high school bully.  He tells Maggie that their father attempted to make Milo feel better by telling him that Justin would have only high school as his crowning achievement but that once he left school his life would be miserable, while Milo would rise.  Milo goes on to tell his sister that he looked up Justin online and found that he had a relatively happy life post-school, and Milo now holds that it was MILO, not Justin, for whom high school was the highlight of his life.

It's a beautiful moment, and really shows that with good material, Bill Hader can be more than a funny impressionist, but a strong actor.

Hader really balances being silly and sincere, between gay stereotype and fully-formed human, and it is one of the best performances I've seen this year.

The same goes for Wiig, who makes Maggie into a vulnerable figure, one who believes she is unworthy of Lance's genuine love.  Again, I'm not a fan of Wiig, but here she kept things believable and genuine.  Luke Wilson's forte is the 'average-Joe', a good guy who is not always the brightest person.  The Skeleton Twins was another in these roles, but Wilson is just so good in it that you do genuinely feel when he finds out that the woman he genuinely loves is betraying him in so many ways.

The relationship between Milo and Maggie is perhaps an exaggeration of most brothers and sisters, but it doesn't seem unbelievable.  We see that these two have wounded each other and themselves, sometimes by their own actions, sometimes not.  However, at the end of the day they are family, and they see that they do need each other.   They have things only they share (such as their unofficial theme song, Starship's Nothing's Gonna Stop Us Now), and that no matter how they might not want to acknowledge it, they are bonded.

I found myself moved by the story and performances.  It was as real as I've seen this year, and with three great performances I think The Skeleton Twins is a film for those who have felt the cords of family sometimes strangle, sometimes strengthen.