I have nothing against Dracula Untold.  I say this because in many ways, Dracula Untold is not a particularly good film. Like this year's Maleficent, this film wants us to root for a figure usually portrayed as the embodiment of evil.   Maybe even feel a touch of sympathy for said 'villain'.

Vlad (Luke Evans) is a Transylvanian prince forced to be a soldier in the Turkish sultan's army, where he kills in such a spectacular way by impaling the enemy that he soon earns the nickname Vlad the Impaler.  He soon finds that killing is torture for his soul, so he manages to leave the Sultan's service and returns to take his place on the Transylvanian throne.  Things are going rather well: he has a wife that he loves, Princess Mirena (Sarah Gadon) and a young son, Ingeras (Art Parkinson).  However, this Era of Good Feelings is short-lived.  The Turks are back, and after getting their annual tribute they have more bad news for Vlad.  They're going to revive that old "we're taking the children to serve in our army" bit, and we're going to need Ingeras too.

Vlad is torn.  To refuse is to start war against a more powerful adversary.  To accept is a betrayal to his people.  In desperation, he seeks his former metaphorical brother, the Sultan Mehmet (Dominic Cooper, playing his second Middle Eastern character and thus, the British idea of 'ethnic').   Vlad offers himself for the children, but Mehmed refuses.  Vlad, unwilling to give his son up, kills the emissaries about to take Ingeras, triggering a war.  Vlad then goes to the mountains where he had encountered a creature he later had learned was a vampire (Charles Dance).  The Vampire gives him blood to drink, and if Vlad can resist taking human blood in the next three days, he will return to being fully human.  For now, Vlad has superhuman power, which he can use to defeat the Turks. 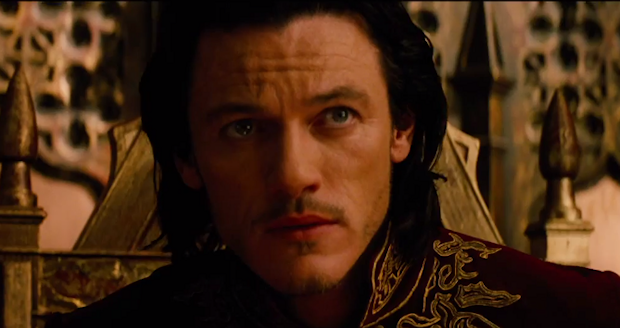 Needless to say, things don't go according to plan.   The war does go on, but there a few hiccups.  For one, his people, thanks to a meddling monk (no, not THE Meddling Monk from Doctor Who) discover his secret, terrifying them all.  Second, the Turks do nab Ingeras and have a hand in killing Mirena.  As it stands, Vlad did attempt to save her as he has the power of flight, but is too late.  She urges him to drink of her blood, and well, you can pretty much fill in the rest (including a final battle with Mehmet, made more difficult as the wily Turk has surrounded himself with silver, with affects vampires...take THAT, Stephanie Meyer!).  Oh yes, Vlad doesn't sparkle in the sunlight...he all but melts.

You think that after the battle things will be good, but now Vlad's army of vampires wants Ingeras' blood.  Fortunately, that same meddling monk arrives with a cross to save Ingeras, and Vlad wipes out the vampires (including himself) by lifting the clouds and letting the sun shine.  However, an eager devotee of Vlad comes in the nick of time to save his master, and Vlad has now lived all these years, where he finds a woman who looks just like his late wife in present-day London.

Now, I should point out that I did fall asleep for a bit in Dracula Untold, but not because I wasn't entertained.  Rather, schoolwork has been particularly brutal these past two weeks with Infernal Statistics, and the lull of a dark theater, with the constant blacks and greys of the film, were simply too much for me.

In any case, I found Dracula Untold to be mildly entertaining in that silly 'we're taking this oh so seriously but we still know it's all a bit of nonsense' style.  It's an action horror film, one where we figure out early where everything is going and to everyone's credit they knew it as well.  Luke Evans makes the most of his time as Vlad, the man who wants peace but goes to extreme lengths to protect his people and family.  He makes it plausible to believe Vlad really wasn't that bad a fellow: someone who really loved his wife and child and would do anything to protect them.

My Mom, who dragged me to Dracula Untold, kept going on about how handsome Luke Evans is.  I didn't have the heart to tell her the real story, and to be frank that is rather irrelevant.  Evans is a real action star, and Dracula Untold shows he can play the human elements of the titled character.  That is more than can be said for Cooper, who loved being all evil as Mehmet, and it looks like he was having a ball being this monstrous.  As far as he was concerned, he was cashing a check, and there are worse ways of making a living.  Bless Evans...at least he was trying.

Similarly, I thought well of Gadon (who is really above the material but did her best to play it straight) and Parkinson (who really had little to do apart from looking terrified all the time).  Dance, in a brief role as "The Master Vampire" balanced being dignified and being aware of the lunacy of it all.

Matt Samaza and Burk Sharpless' screenplay does leave the door open for a sequel, and while I oppose those tricks I'm not going to raise large objections over this.  Their script did its best to make Vlad a human being, more flawed and tragic hero than blood-sucking monster.  Again, credit to Evans for playing it so well.

Like many of these horror/action films, Gary Shore indulges in constant grays and darkness, which is now becoming shorthand for 'we're in a dark film'.  I can't say I'm impressed by that, but again, I'm not going to go to war over these trifles in a trifle of a film.

At the end of the day, I think people know that Dracula Untold is nothing more mindless good times.  I enjoyed it for what it was: a mild distraction that was aiming at being just that and nothing more.  If it was aiming to be something deeper, an exploration into the recesses of a tortured soul, it didn't do itself any favors.  For me, Dracula Untold won't replace either the Bela Lugosi or even Gary Oldman versions of the Dracula story, but if nothing else, Dracula Untold will soon find itself in constant rotation on FX or some other pay network programming.

I can live with that.