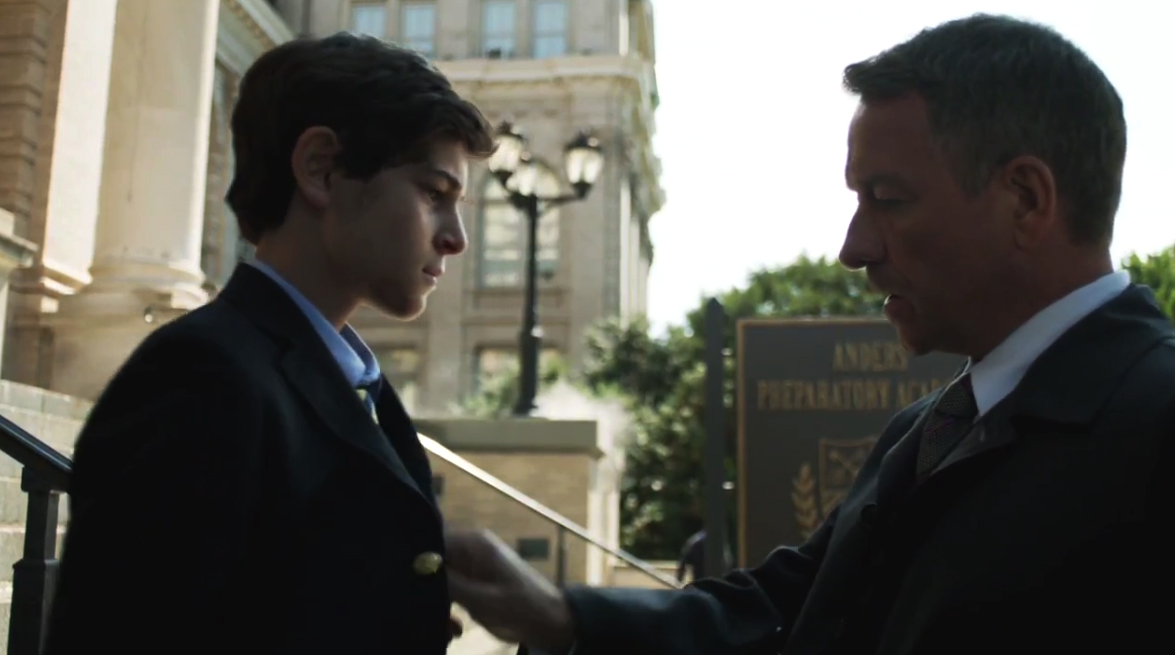 In terms of crimes, The Mask is rather weak.  Once Detectives James Gordon (Ben McKenzie) and Harvey Bullock (Donal Logue) figure out WHERE the victim came from, the crime is shockingly easy to solve.  However, what The Mask has in its favor is the character development, in particular of David Mazouz's Bruce Wayne, whom we can genuinely now see slowly coming into his own as the future Dark Knight.   We don't short-change the war brewing between Robin Lord Taylor's Penguin and Jada Pinkett Smith's Fish Mooney, where we get some really shocking moments.

AND CAROL KANE IS BACK AS GERTRUDE KAPELPUT!

That just gives The Mask an extra point because in my world, there can never be too much Carol Kane.  There can also never really be enough of Cory Michael Smith as Edward Nygma, so while the crime wasn't all that spectacular (although it was creepy), The Mask is elevated by a deeper exploration of characters.

Gordon and Bullock are investigating a body found by the waterfront, and at first it looks like a run-of-the-mill murder...until GCPD forensics officer Nygma finds a thumb inside the victim's mouth.  The crime is quickly connected to billionaire Richard Sionis (Todd Stashwick), who has a fixation for masks and swords.  Sionis believes himself a warrior, which doesn't sit well with veteran Gordon.  While speaking to Sionis, Gordon flat-out accuses him of the crime.  Soon it becomes clear that Sionis has a fight club going on at his investment firm, where he has the top three candidates for a position fight it out to see who gets the job.

In any case, Sionis quickly takes Gordon and now has HIM as the object of the death match, telling the potential employees that whoever kills him will not only get the job, but a million dollars.  Gordon by now has given up on the idea that his fellow GCPD officers will have his back, but he has a surprise waiting for him as he fights for his life.

In the major subplot, Bruce Wayne returns to school, where he comes across Tommy Elliot (Cole Vallis), who quickly mocks him for becoming an orphan.  Bruce doesn't take kindly to that taunting, but the larger Tommy makes quick work of Master Bruce.  With a little help from Alfred (Sean Pertwee), Bruce literally takes down the larger Tommy, and now Bruce wants to learn to channel his perpetual anger into something, and asks Alfred if he'll teach him to fight.

In the minor subplot, the cold war between Oswald Cobblepot (Robin Lord Taylor) and Fish Mooney (Jada Pinkett Smith) continues unabated.  Oswald brings Fish two things: terms of peace (no blood will be spilt under orders from both dons) and a gift of a beautiful brooch.  Bad move, as Fish uses the pin to stab Penguin's hand, her rage growing to take down her former minion.  Oswald later gives the brooch to Mother Gertrude (Kane) who gives him an interesting insight into humans: they all have secrets.  Who better to know Fish's secrets than her new minion Timothy (Robbie Tann).  Timothy is roughed up and he breaks, telling Penguin Mooney has someone close to Falcone.  That's all he really needs, and he tells his boys to make sure Timothy's body can't be found.  They are at peace, you know.

As I stated, The Mask  in terms of crime isn't the best hour of television.  We know rather quickly who the criminal is and what it involves.  The Mask, however, is not about the crime.  Instead, it is background to the growing complexity of the characters.

In particular, The Mask is about Bruce Wayne.  We now get him out of Wayne Manor and have him interact with boys his age.  Again, not being incredibly versed in Batman lore, the future role Tommy Elliot has in the Batman mythos (which I will keep Hush-hush) escaped me.  However, even if Tommy played no part in the large mythology it would still be great because we could see the evolution of Bruce Wayne.  This appears to be the trigger that brings Bruce closer to embracing his destiny.  Mazouz is astonishing as Bruce (which he has been since the Pilot): he brings the vulnerability of the orphan Bruce with the growing rage within him to make a difference in the crumbling city he lives in and will soon be part of its leadership.

We also see that Bullock is also again more complicated than people might have first thought.  He makes it clear he isn't Gordon's biggest fan either when he confronts the entire department over their lack of enthusiasm to help him find Jim, but he is going to stand by his partner.

There are a few moments for CMS* as Nygma spread through The Mask, which is clever and better than having him come in for just one scene.  We see he is brilliant (he came to the discovery that the victim is connected to previous crimes through his own work).  We see also that he clearly enjoys the more gruesome aspects of the crimes (he has too much fun at the autopsy). However, if someone beats him to the punch he is displeased.   CMS has a great grin when he brings what he's discovered to Bullock and Captain Essen (Zabryna Guevara), but when Bullock tells him they already know what he discovered, his frown conceals his own barely controlled irritation at being outwitted.

Interestingly, it was RLT who had a smaller role in The Mask, as it was more focused on the camp villainy of Sionis, but he still does excellent work throughout.  When he tells Mooney that her stabbing his hand was uncalled for, we can see that Penguin himself is coming close to exploding.  His scenes with JPS were coldly ruthless, and his scenes with Carol Kane (I just love her slightly bonkers Gertrude) are also excellent.  I'd love to see Gertrude take a greater role just to see how far Carole Kane is allowed to go.

It's interesting that JPS, who has found detractors for being camp, has a great moment when she tells her mole Liza about how she swore never to be powerless after one of Falcone's men murdered her mother for lousy sex service.  It downplayed a bit the camp version of Fish and allowed some genuine emotion to seep through.  Whether this story is true is subject of debate: an old blues singer (Teodorina Bello), who has overheard their conversation, wonders why Fish tells such stories.  It's suggested but never overtly stated that this blues singer, Maggie, is really Fish's mother, very much alive and well.  Still, it was a great scene.

It's interesting that both Fish Mooney and Oswald Chesterfield Cobblepot are their mothers' children.  Their backgrounds and how their mothers were/are is what made them what they became, and how they will fight each other through the rest of Gotham Season One.

We even get a tiny bit with Camren Bicondova's Selina Kyle, where we can see a little comedy as she attempts to steal furs.  "Girl's gotta shop," she tells the officers who find her.  Sometimes a little levity goes a long way.

If things were fair, The Mask might have gotten fewer points because the overall crime wasn't particularly complex to solve, almost as if that were besides the point.  However, thanks to really great work by Mazouz in particular, along with Logue, Taylor, Kane, McKenzie, and both Smiths, we see that The Mask is better because of them.

*As we have two actors named Smith (Cory Michael and Jada Pinkett), I think it will be better to use initials so as to not get the two Smiths confused.
Posted by Rick at 12:52 PM