Gotham: Spirit of the Goat Review

GOTHAM: SPIRIT OF THE GOAT

For this Gotham episode, it is not the usual suspects (James Gordon, Bruce Wayne, or Oswald Cobblepot aka The Penguin) who dominate.  Rather, it is Harvey Bullock and Edward Nygma who are the primary focus of Spirit of the Goat.  That not only allows for more screen-time for Donal Logue and Cory Michael Smith, but also manages to do something that Gotham hasn't done all that much with the characters: give them both a backstory and a life where we see them grow and evolve.  In short, we are getting to know Bullock and Nygma in ways that are not fully expected.  This isn't to say Spirit of the Goat short-shifts the other characters, and we do get perhaps one of the most Oedipus-centric moments in all of Batman-related storytelling, but in almost every way possible, Spirit of the Goat is Gothic horror and character exploration brilliantly mixed in what I think is a simply brilliant debut season.

Gotham: Ten Years Ago.  A serial killer who goes by the name of The Goat has been targeting the first-born of Gotham's wealthy.  Detectives Harvey Bullock (Logue) and his senior partner, Detective Dix (Dan Hedaya) have tracked both the killer and a potential victim to the Cannery district.  Dix calls for backup but Bullock is determined to rescue the abductee.  Dix warns Bullock of Gotham's Number One Rule: No Heroes (which, as a side note, is better than Doctor Who's Number One Rule: The Doctor Lies, because, well, he didn't until Steven Moffat took over and bastardized the show, but now I digress).  Bullock does indeed rescue the girl and shoots the Goat down, but at the cost of Dix's health (he fell through the floor during the chase, leaving him in a wheelchair).

Cut to today, and an older and more bitter Bullock is facing what at first appears to be a copycat killer.  His coworker, GCPD forensics member Edward Nygma (Smith) is not helping with his insistence on having Bullock solve his latest riddle.  Both, however, are surprised and amused that James Gordon (Ben McKenzie), the Boy Scout as Bullock calls him, is not there at work.  Gordon is still attempting to mend his relationship with Barbara Kean (Erin Roberts), his WASP girlfriend who wants in her words, "half of what he's carrying".  After some struggle, Gordon agrees to tell her all he can. Good thing, for Barbara's ex-lover Renee Montoya (Victoria Cartagena) and her Major Crimes Unit partner Crispus Allen (Andrew Stewart-Jones) have found a witness stating he saw Gordon murder Oswald Cobblepot (Robin Lord Taylor).  Ozzie, for his part, is very much alive, bonding with his mother Gertrude Kapleput (Carol Kane).  This includes a little chat (where Oswald insists there is no 'painted lady' luring him into sin) and some bath-time (where Mother Kapleput gives her little boy a touch of a scrubbing...not creepy at all).

Bullock now is haunted by this resurgence of The Goat, especially after confirming that this was not a copycat.  He reluctantly goes to see Dix hoping that perhaps the hidden detail accidently slipped through his lips.  Dix hasn't told anyone about what confirmed that the Goat appears to have returned, and he also offers Gordon another side to Harvey, one where Bullock and Gordon are closer than the former is willing to admit and the latter can see.

Nygma, for his part, is having both good and bad.  The good? He helps in narrowing down the suspects in the new Goat investigation thanks to his amazing abilities with puzzles.  The bad?  He fumbles his attempts to win the favor of Kristen Kringle (Chelsea Spack) the records department head whom he clearly likes but can't get anything but open irritation from, especially after he attempts to 'help' her with records without her permission or consent.  Dix believes the Goat is a conspiracy against the wealthy of Gotham, but Bullock dismisses this.  However, after he and Gordon basically repeat history with the capture of the suspect, Bullock realizes the connection between the Goat from then and now.  It comes when he realizes the power over the mind that Dr. Marks (Susan Misner) holds over others.

As the case of the Goat comes to a successful conclusion, Gordon finds himself under siege thanks to the relentless Montoya.  Barbara warns him and offers to flee with him, but the upright Gordon refuses and is arrested for the murder of Oswald Cobblepot.  At the police station, Jim's arrival causes an uproar among the force.  Sergeant Essen (Zabryna Guevara) will not allow her officer to be arrested, and Bullock stands up for his partner.  Gordon is desperate to communicate to Bullock that he DIDN'T kill Cobblepot, and the ensuing arguing attracts the attention of everyone, including Nygma.  However, when Oswald Cobblepot makes his grand entrance, announcing who he is, the silence gives way to an enraged Bullock. It's interesting that Spirit of the Goat gave one of the best aspects of Gotham almost nothing to do.  David Mazouz's Bruce Wayne is unconcerned with the Goat targeting the wealthiest first-born of Gotham and calmly says he'll stay in the city.  Why would the Goat target him, he tells Alfred (Sean Pertwee).  After all, he's got no one to be taken from.  The only thing he has apart from his continuing investigation on Gotham's corrupt core is a brief scene where Selina Kyle (Camren Bicondova) breaks into Wayne Manor and sees Bruce sleeping on the couch of the study.  She steals a silver box while an unsuspecting Bruce continues to slumber and she observes him sleeping.  It's a silent scene and perhaps superfluous, but boy was it also one of my favorite scenes.

This little bit is a great nod to the complex relationship Batman and Catwoman will have: a mixture of antagonism and desire.  There is something almost cute in seeing these two mythic figures as children, knowing that in the future they will be battling the other while being drawn to each other at the same time.  What did Selina think of this lost boy sleeping?  What would Bruce think of seeing this pretty girl so close?  Speculation granted, but for myself while I recognize it adds nothing to the story I would not have had the heart to cut it out.

Spirit of the Goat continues with Gotham's simply astonishing cinematography.  The episode looks like it was made for a horror film, the shafts of light making things more spooky.  The sequences of when Bullock takes the Goat down (twice) have a Gothic horror feel, and when the Goat suspect is in the holding room, with the flickering lights and eerie sounds, it looked like the holding cell scene was directed by David Lynch.

However, where Spirit of the Goat excels is in giving us enough about Harvey Bullock's backstory without overwhelming us with information.  We see that before Gordon, Bullock was in many ways like him: determined to rush into danger if it meant saving someone, and we learn that Bullock is paying for Dix's stay at the retirement home.  This information, along with Dix's assertion that Bullock is some sort of white knight, surprises Gordon and gives us a more complicated idea about who Harvey Bullock is.  Now, Harvey is no longer the sleazy, corrupt cop whom Gordon has to endure.  He's a haunted man, worn down by all that he's seen in this mire of a city called Gotham.  He captures what Dix said about Gotham's Number One Rule.  Harvey Bullock I don't think wanted to be a hero, but he did initially start out wanting to do the right thing.

This is Donal Logue's best performance in Gotham.  Logue makes Bullock into someone who appears to have given up but who still has moments of clarity (mental and moral) and who is also a good cop.  When the new Goat tells him that no one can stop the Spirit of the Goat, Logue as Bullock shouts out, "Will you stop saying THAT?", almost less a plea than a command to get his own sanity back.  It is also Bullock, not Gordon, who realizes who is the mastermind of the Goat and his confrontation with Marks allows Logue a chance to show he can be as competent a detective as the upright Gordon.

He even has yet another moment of comedy but makes it so natural.   When he is complaining about how he already had solved the case only to have it return, he says, "How the hell did this copy-goat know about this (the clue kept out of the press)?"  Logue's use of 'copy-goat' for 'copycat' struck me as both funny and revelatory of Bullock's persona. 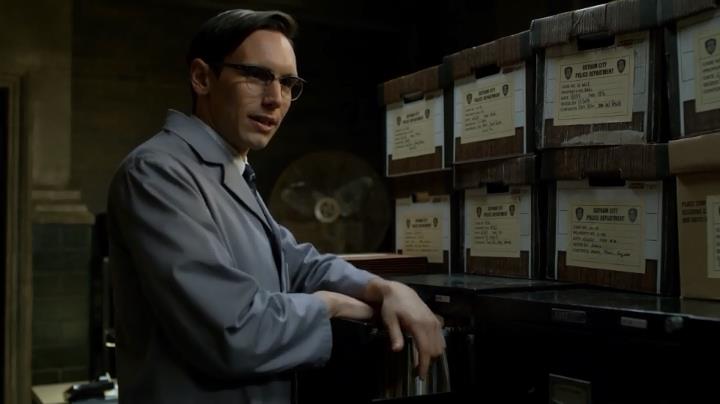 Spirit of the Goat also gives us Cory Michael Smith's best work as Edward Nygma.  We didn't have to go home with him to see that Nygma is not yet the criminal master soon to be known as the Riddler.  Instead, he is a slightly bumbling man, attracted to a woman and struggling to bring her into his world.  He also is highly pleased to have helped track down the most likely suspect in the Goat investigation, even giving a toast to Gordon and Bullock as they go after the suspect...with his question mark coffee cup.  Nygma appears to be a good forensics expert but someone who is not comfortable apart from his work.  I'm glad that Smith is being given more to do and hope that perhaps next season we will see the Rise of the Riddler.

In other terms, Dan Hedaya is excellent as Dix, the more jaded officer who knows that deep down inside Harvey Bullock is (or at least was) a good man and good officer.  Whether he knows it is Harvey who is supporting him (or why) is unknown, but we do get a greater insight than we've gotten prior.

We even get some insight on Oswald and Gertrude.  First, there simply cannot be too much of Carol Kane, and hope that she will make yet another return appearance on Gotham, and much longer too.  We see with RLT that Oswald has wanted respect, and now his criminal enterprise is his effort to be respected, to get past the bullying he's endured, the dismissiveness of others overlooking him.  As brief as RLT's appearance was throughout Spirit of the Goat (since the story didn't revolve around him in any way) he still made the most of it.

If I were to find fault in Spirit of the Goat, it might be that the cliffhanger is almost a repeat of The Balloonman, with Penguin appearing dramatically framed to make his bold return.  I do wonder why his storyline is going so fast, for I figured he would remain in hiding for a few more episodes.   However, this is a minor point in what was a strong Gotham episode where we got to see two characters and actors become just as important as the ones that have dominated the series so far.

Robin Lord Taylor, Ben McKenzie, and David Mazouz to me are the standouts of Gotham.  For at least one episode (and hopefully more), they were joined by Donal Logue and Cory Michael Smith.  Gotham has shifted into one of the best series of this season, and a fine addition to the Batman mythos.

Next Episode:  Penguin's Umbrella
Posted by Rick at 2:04 AM