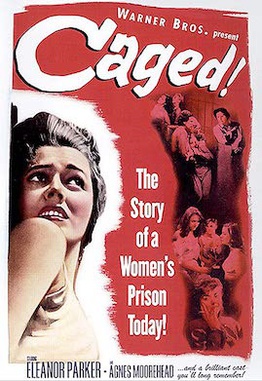 I cannot say whether Caged is the first 'women-in-prison' film, but it seems to have set the standard for so many of this genre. You have the innocent prisoner, the sadist (and potentially lesbian) matron, well-meaning but ineffective wardens, and various women of ill repute. Caged, despite its somewhat lurid setting, is also a message movie about the need for prison reform.

Marie Allen (Eleanor Parker) is now in prison, convicted of being an accessory to armed robbery when her husband held up a bank. She is more than likely innocent of the crime but far more innocent in all other ways, finding herself constantly terrified in this new world. She is also both a widow and pregnant.

The warden, Mrs. Benton (Agnes Moorehead) is kind and wants to be Marie's friend, but she cannot help her when Marie is under Matron Evelyn Harper (Hope Emerson), a massive woman who is from the "If you're good to Mama, Mama's good to you" school of prison matrons.

Over time Marie sees all sorts of ugliness even from "Free Side". A fellow prisoner commits suicide. Marie's mother won't take in her grandchild, forcing Marie to cede control of her son to the state. When the parole board rejects her, she totally loses it.

Now becoming harder, Marie finds herself an unwitting pawn between two Queen Bees, Kitty (Betty Garde) and Elvira (Lee Patrick), each attempting to get her to join their criminal gang once she's 'flopped' back to "Free Side". There's a riot that brings a terrible retribution to Marie, but which now fully transforms her into a cold criminal. She agrees to go with the surviving Queen Bee after the lesser one, driven mad by Harper's cruelty, kills her, if that Queen Bee can smooth over the parole hearing.

True to her word she does, and Marie, now a bitter, cynical woman, goes off with the criminal crew. When asked what to do with Marie's file, Benton sadly says to keep it active, stating "She'll be back". 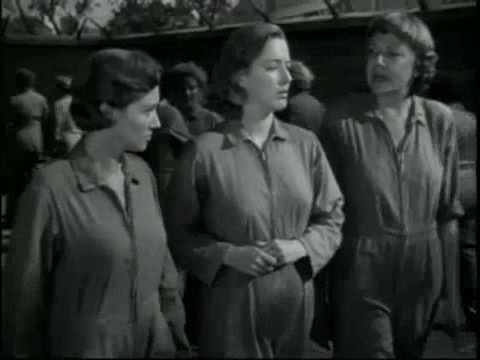 Curiously, Caged is not as tawdry as the 'women-in-prison' stereotype. We do have elements of some 'shocking' situations. After Marie loses her baby to the state, Kitty subtly suggests that it might do her good to join her enterprise to ensure a smooth parole board hearing. Kitty also suggests that if she doesn't and Marie has to stay in Corridor B longer, she may end up indulging in the pleasures of the flesh wherever available.

"In prison too long, you don't think of guys. You get out of the habit", Kitty coolly tells our still innocent Marie. That's probably as overt a "we're all lesbians here" line you'll hear in this 1950's film, but it's still pretty overt.

Caged, to its credit via John Cromwell's directing, gives us a mix of quasi-documentary and drama feel. The former comes from how Marie is processed in, down to the mug shot. The latter is seen with things like a montage of bells ringing constantly to note the shifting of activities, driving Marie to the brink. The suicide is shocking, as is Matron Harper's killing, even if the latter is expected.

Other moments, like the prison riot and Marie's shaving, are also emotionally involving.

Caged might have the alternate title Baroness Behind Bars, for it seems a bit odd to see the elegant Eleanor Parker in this situation. However, to her credit Parker gives a fine performance. She has to play Marie as essentially three different people: the innocent, the embittered woman and the hard-hearted criminal. She shifts beautifully from "Marie Allen" to "Allen, Marie" to "93850", even if her perpetually naive figure at times becomes more frustrating to take. However, when she goes hysterical when her mother won't take her child and especially when she goes bonkers at the parole hearing, it is quite riveting.

Parker also knows to play things still, such as when she returns from solitary with shockingly short hair. As our Joan of Arc of Corridor B comes back, even the other hardened inmates look on in disbelief. 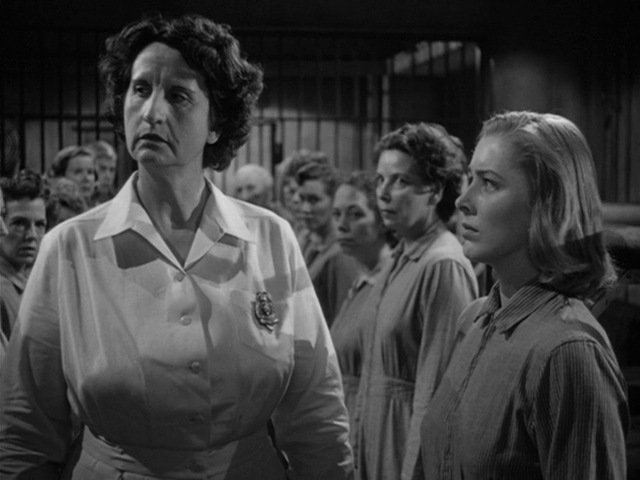 Emerson, who like Parker received a nomination for her performance, is a giant of a woman with no redeeming qualities. She literally towers over the others, but in her vindictiveness, her cruelty, her greed and arrogance, Emerson's Matron Harper is a vile figure. She is the opposite of Moorehead's Benton, who is sympathetic but aware of Harper's manner. Unlike Harper though, Benton has no friends in high places. Moorehead plays Benton as caring and determined to bring about changes but almost powerless to do so.

Caged's message of how prison cruelty transforms innocent women into criminals is subtle but effective. We also have some very fifties motifs: only in this decade could you have a pregnant woman light up a cigarette and smoke so nonchalantly. We do have in Caged some good performances, a story that flows rather smoothly and advocacy about the importance of prison reform.

Not bad given Caged may have begun a genre not known for social advocacy.