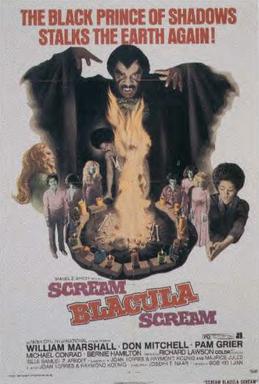 A power struggle breaks out after the death of a Los Angeles voodoo queen between her biological son Willis (Richard Lawson) and her adopted daughter Lisa Fortier (Pam Grier). Willis goes to 'The Ragman' (Bernie Hamilton) for help, and he gives Willis the bones of a powerful figure whom he says can help. That figure, summoned by Willis' voodoo power is Mamuwalde (William Marshall), also known as Blacula.

Blacula, however, enslaves Willis, the first of many he gets for his unholy court. Mamuwalde attends a party hosted by Lisa's boyfriend, Justin (Don Mitchell), a former cop and now academic and expert in African art. Mamuwalde, upon realizing Lisa is a voodoo priestess, seeks her help to end his curse. However, even in vampire form Willis still plots revenge on both Lisa and Blacula.

Justin, realizing the danger Blacula poses, gets his contacts at the LAPD to raid the mansion Blacula and his Court are in at the worst time. Lisa's rites are on the verge of curing Mamuwalde when the raid takes place. Blacula is enraged and goes on a rampage, ignoring Lisa's pleas to stop and try again. Eventually, when Blacula comes close to killing Justin Lisa uses her powers to stop Blacula's reign of terror, leaving things ambiguous. 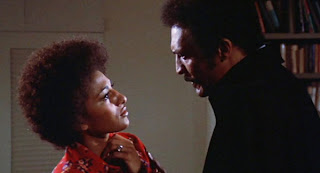 Scream Blacula Scream has potential but things seem to happen so quickly you may be left scratching your head wondering what is going on. Right from the start we have the power struggle between Willis and Lisa, which is all but forgotten by the time Blacula rises again. This might explain why 'The Ragman' appears only once and just pops up to bring the plot forward.

Moreover, 'The Ragman' looks like a black leprechaun, which should give people fits of laughter.

A great deal of Scream Blacula Scream plays almost as farce, more so now given that it is more entrenched in the 1970's than its predecessor. Today's audiences may marvel at the various threads and Afros all around, particularly Lawson's Willis who sports some way-out ensembles and a bouffant do that even James Brown would think was too outlandish.

There is another negative in that Scream Blacula Scream is more gory than my memory of Blacula, particularly during the police raid. Keep an eye out for Craig T. Nelson in an early role as one of the unfortunate cops slaughtered by the unholy coven.

The film does have a few pluses. Marshall continues to make Mamuwalde/Blacula a dignified character, commanding and imposing even in the most outlandish situation. We also get more pointed social commentary, such as when Blacula roams the Los Angeles night and encounters two pimps who threaten him for turning down one of their ladies. As these pimps harass him, Blacula dresses them down, telling them they've made a slave of their sister and imitate their masters.

As a side note, this streetwalker who attempts to solicit Mamuwalde is one of the most elegantly dressed hookers I have ever seen on film.

Scream Blacula Scream even sneaks in a moment of humor at Justin's party, where we see an old white couple who are the only ones not getting down with their bad selves.

Curiously, Grier to my mind gave a weak performance consisting mainly of looking worried. Even more bizarre, Grier's Lisa appears to have no reaction to seeing her best friend rise from her coffin when Lisa is keeping watch over it. Here is essentially a vampire beckoning her and Lisa doesn't react with horror or shock but with mild confusion.

Grier made a name for herself as the strong black woman in films like Coffy and Black Mama, White Mama, so one might have expected more of a battle of wills between the Dark Prince and the Voodoo Queen. Granted, the film has Lisa helping Mamuwalde, but I felt Lisa was too passive for most of the film.