The Ballad of Buster Scruggs: A Review 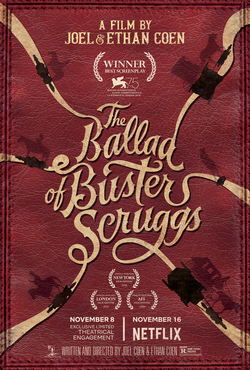 THE BALLAD OF BUSTER SCRUGGS

The Ballad of Buster Scruggs is the second film I ever stopped watching before it ended. The first film? Freddy Got Fingered, hardly good company. Just as with the Tom Green film, I had be talked into seeing The Ballad of Buster Scruggs again, this time via an online vote versus my late friend Fidel Gomez, Jr. forcing me to. Perhaps it might have been a bridge too far for me to expect to love the film. I have never been a Coen-Head and find them a most acquired taste.

Divided into six short films ranging from 11 to 37 minutes give or take, The Ballad of Buster Scruggs adapts two stories with the others being written by Joel and Ethan Coen. They are as follows:

The following is a breakdown of each story along with its length. 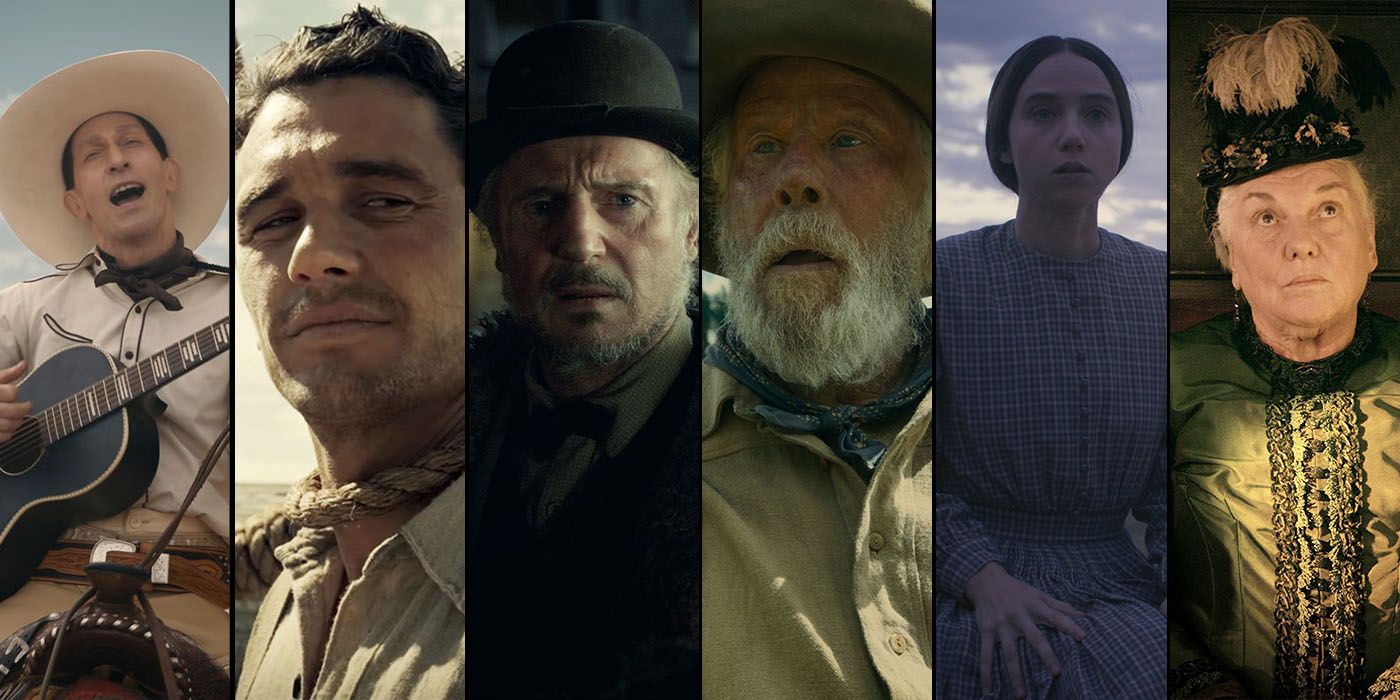 The Ballad of Buster Scruggs (18 minutes)

Buster Scruggs (Tim Blake Nelson) is a perky singing cowboy and deadly killer. Speaking to us directly, he offers his wit and wisdom while riding across the West. The jolly outlaw kills almost always in self-defense and in surprisingly clever ways. Yet as he observes, there's always someone coming up who wants to make a name for himself by taking down the top down. Scruggs finds this true when he himself is killed in a shootout with The Kid (Willie Watson) who also can carry a tune.

Buster's spirit rises to that saloon in the sky, complete with harp, singing his lament When A Cowboy Trades His Spurs for Wings.

While not credited as such, Near Algodones bears a similarity to or at least inspiration from An Occurrence at Owl Creek Bridge.

A bank robber (James Franco) finds his holdup fouled up by a pan-wearing banker (Stephen Root). Captured, the robber is about to be hanged when Indians kill off the hanging party. They don't bother with him, instead literally leaving him hanging. A cowpoke (Jesse Luken) comes upon him, rescues him, and offers him a job as a drover.

The robber's bad luck continues however, as the drover is really a rustler. The robber is now tried and convicted of rustling and set to be hanged again. Just before the black hood is placed on his head, the robber spots a pretty girl and admires her before he is executed.

While not credited as such, Meal Ticket bears a similarity to or at least inspiration from The Elephant Man.

A traveling impresario (Liam Neeson) travels the West with 'Professor Harrison the Wingless Thrush' (Harry Melling), an armless/legless young man who recites poetry, Shakespeare and Lincoln's Gettysburg Address for entertainment. As they travel the Impresario notes that the act is drawing dwindling numbers and fewer profits.

An old prospector (Tom Waits) scours a beautiful valley for gold, digging small trenches to see if anything literally pans out. Eventually he finds "Mr. Pocket", a healthy gold strike which delights him. Just then, he realizes that a Young Man (Sam Dillon) is behind him. The Young Man shoots the Old Prospector in the back.

The Young Man does not realize that despite being hit, The Old Prospector is not dead. When the former jumps in to take the gold, the latter jumps him and shoots him straight in the head. The Old Prospector goes to the river to clean, realizes that while wounded no vital organs were hit, and buries the Young Man in the same gold ditch, taking "Mr. Pocket" with him.

The Gal Who Got Rattled (37 minutes)

Alice Longabough (Zoe Kazan) is travelling to Oregon with her brother Gilbert (Jefferson Mays) with the vague promise of a marriage proposal. Gilbert dies en route of cholera, leaving Alice in quite a lurch. Apparently, Gilbert promised their driver Matt (Ethan Dubin) $400 with half on arriving at Fort Laramie. This is not only a rather high sum for the Oregon Trail but cannot be verified as Gilbert is dead. Making things worse, their money was more than likely buried with Gilbert.

Into this comes Mr. Knapp (Bill Heck), a quiet man serving as guide/protection. He has grown fond of Alice and proposes to her, adding that he personally will take on her debt. Alice, smitten with him too, agrees.

However, none of that is to be. While re-encountering Gilbert's dog, President Pierce, she wanders off. Mr. Arthur (Granger Hines), the older guide, finds himself and Alice in the Indians' sight. He gives the frightened Alice a gun and tells her that she must kill herself if she hears him kill himself rather than be taken prisoner. Mr. Arthur does manage to eventually defeat the raiding party, but discovers Alice mistook his last shot for his last shot and shoots herself. Sadly, Mr. Arthur now must find Billy Knapp.

A stagecoach has five passengers. There's a trapper (Chelsie Ross), Mrs. Betjeman, a Lady (Tyne Daly), Rene a Frenchman (Saul Rubinek), Clarence an Irishman (Brendan Gleeson) and an Englishman (Jonjo O'Neal). The English & Irishman are taking a corpse with them on top of the stagecoach.

The trapper, the Lady and the Frenchman have various discussions about how people are alike and/or different, and at one point the Lady appears to have a panic attack. Rene asks the Coachman to stop but finds that the Coachman cannot stop. The English & Irishman reveal they are 'reapers', which the trapper understands as 'bounty hunters'.

Never overtly stated, it is understood that the English & Irishman literally are 'reapers', and have brought their fellow travelers to their literal final destination. The trapper, the Lady and the Frenchman all are reluctant to enter, but enter they do.

Our anthology film, I should warn people, is not for casual viewing. The Ballad of Buster Scruggs can be very trying if one goes in to see a straightforward film, even if the opening is clear about how it 'took' its tales from a book. The first time I tried watching, I quit at the end of Meal Ticket, though to be fair the concept of someone murdering a person unable to defend himself was enough to get me to switch the thing off.

If one goes into The Ballad of Buster Scruggs for mere entertainment, I imagine that they won't stick to the end.

If The Ballad of Buster Scruggs has a theme running through each of its stories, it is Death. Each story has a main character die, almost all through violence. Some deaths are self-inflicted, some are due to their own actions, some are through no fault of their own, but Death walks the film.

Despite my better judgment I will rank the stories thus:

I favor The Mortal Remains because this was for me the most visually arresting of the stories, the most allegorical and witty right down to the pun in the title. The Gal Who Got Rattled was almost sweet in the interplay between Kazan's Alice and Heck's Knapp, making her end sad, almost unfair. Meal Ticket, apart from the shock that Professor Harrison was once Dudley Dursley in the Harry Potter films, was also allegorical if a bit snobbish. To my mind it suggests that the Coens were mocking audiences who don't care for their work, that their 'art' will never be as popular as 'mindless entertainment'.

We see this in how the population, first enthused with Professor Harrison's eloquent delivery of grand verse, eventually turned their wild enthusiasm for a chicken who could allegedly count. We've heard of such things like Clever Hans, a horse who could allegedly do math. With Meal Ticket, I think the Coens were basically saying 'high art' like Shakespeare (or perhaps, say The Ballad of Buster Scruggs) will be rejected over counting chickens (or say, something like Bohemian Rhapsody or The Greatest Showman).

All Gold Canyon has to my mind the beautiful cinematography of all the segments (though all of them are quite lovely) but I have never accepted the idea that once shot a person could survive that long and make it out alive. Granted, my view is colored by memories of Sicario: Day of The Soldado, so there's that.

The Ballad of Buster Scruggs itself I found too cutesy, self-aware and self-amused to my liking. I especially hated the 'amusing' songs, though I have grown to slightly appreciate When A Cowboy Trades His Spurs for Wings. Near Algodones was far too reminiscent of An Occurrence at Owl Creek Bridge for me to completely enjoy.

As a side note, 'algodones' in Spanish is the plural for 'cotton'.

As I look back on The Ballad of Buster Scruggs, I find that it will try some people's patience. It tried mine. I'm sure Coen-Heads will love it as they love everything they do except perhaps for The Hudsucker Proxy. Personally, I can appreciate what the Coen Brothers are going for while not fully embracing it.