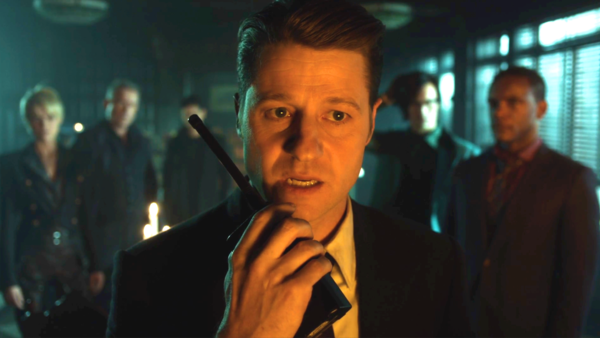 They must prove to the outside world that Eduardo Dorrence (Shane West) along with his mainland handler, Secretary Walker (Jaime Murray) were responsible for the Haven attack as a pretext for total extermination of Gotham. Eduardo, however, has a few tricks up his own sleeve, the ace being Lee Thompkins (Morena Baccarin), whom he's been holding in case Ed goes rouge.

Eduardo looks like he's done for after a brutal battle with Gordon, but Walker walks in afterwards, giving him a face mask to keep this bane of our existence alive. If Gordon knew this, he'd be concerned, but he has other issues to think on, like how Barbara is pregnant with his child.

In our subplot, Oswald Cobblepot (Robin Lord Taylor) becomes unlikely allies with Selina Kyle (Camren Bicondova) to get revenge on the perky master thief known as Magpie (Sarah Schenkkan), who dared steal from Pengy. They also start planning to escape Gotham via the tunnel Jerome Valeska (Cameron Monaghan) was working on, little knowing our "not-Joker" has plans of his own.

I wish I could like 13 Stitches, but I found a lot of it beyond plausible, even for Gotham. Of particular note was Eduardo. West to me is not convincing as our future Bane, having nothing to recommend him for 'villain' except his efforts to out-growl McKenzie. He's as intimidating as a wet rag.

As if that weren't enough, I found it laughable that after falling on a spike Eduardo still managed to survive long enough for Walker to walk in. That thing should have killed him instantly.

The whole fight between Gordon and Eduardo was awful, and not just because McKenzie, like many actors doing directing turns, seemed more interested in visual flares than anything else. It was also that there was simply too much monologing in 13 Stitches. It looked like Eduardo and Gordon wanted to talk each other to death.

Then again, Pengy wasn't averse to doing a lot of talking down to Magpie too.

There were some good things in 13 Stitches, particularly with Mazouz as action star, taking down villains on the roof while trying to complete his part of Gordon's plan. Bicondova and Taylor proved an interesting double-act, rattling of lines and even quips well. Selina's description of Magpie as someone who looks like "a goth chicken" was very funny. Smith and Richards had some amusing moments when Ed's chip is removed, particularly Smith's ability to rattle off nonsense dialogue with ease.

The interplay between Smith and Donal Logue as Detective Harvey Bullock on the issue of the pallid beach mouse was clever, amusing and even tense, which also worked in the episode's favor.

What really pushes 13 Stitches down is the violence, an issue that has plagued Gotham and which I have called the show out on several times. The killing of Eduardo's crew along with Eduardo's not-so-ultimate end were far too graphic.

13 Stitches is kind of a boring episode despite the various calls for action. Excessively graphic but not without some merits, I was displeased by almost all of it.

Next Episode: Ace Chemicals
Posted by Rick at 10:41 AM