It's Complicated: A Review 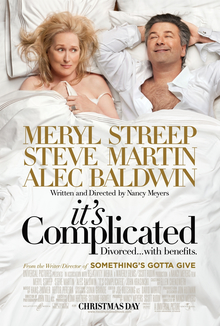 Perhaps it's inevitable that the concept of "hooking up" now has infected the baby boomer generation, for how else can I understand the behavior of the leads in It's Complicated, another romantic comedy that's light on both counts.

Jane (Meryl Streep), a restaurateur, and Jake (Alec Baldwin), an attorney, once were married, but Jake dumped Jane to marry his mistress Agnes (Lake Bell). Ten years later, Jane & Jake reunite for their son's college graduation. Jane suffers through the empty-nest syndrome, while Jake is just suffering through a marriage with a younger woman who cajoles him to fertility treatments so her son Pedro (who isn't Jake's) can have a sibling. They see each other (coincidentally, as happens in these types of movies) in the same medical office visit (she leaving a plastic surgeon's office, he on his way to the fertility clinic) and at a hotel where they're both staying for their son's graduation. They share a few drinks, a few memories, and before you know it: they wake up together after a quick roll in the hay. Now Jane finds herself in the odd position of having an affair with a married man who is her ex-husband. Things get more complicated (hence the title) for her when she starts a relationship with Adam (Steve Martin), an architect working on her house.

There really isn't anything clever, witty, or original in It's Complicated. Far from living up to the title, everything's quite simplistic. Baldwin's Jake comes off as sexually insatiable and slightly obsessed about starting up with Jane. Side note: Jake & Jane--am I the only one who thinks your main characters should have more than one letter separating them? He has no subtlety to how he approaches his ex-wife: driving up to her house for a romp, making all sorts of suggestive comments to her in front of their kids. It's as if he wants to keep the wife and the ex-wife and have them accept this relationship.

Why did I keep hearing lines from that song Stay by Lisa Loeb while watching this? Because he can't let either go since he's "so scared to lose", perhaps? Baldwin was reveling in how outrageous and immature he could be, and Streep also was having a good time being comedic, but one wonders why she would be so willing to be so upset when he couldn't get away, especially when Adam has entered the picture. I will complement Martin for underplaying Adam, bringing a touch of drama to a situation where he's getting screwed (metaphorically of course). 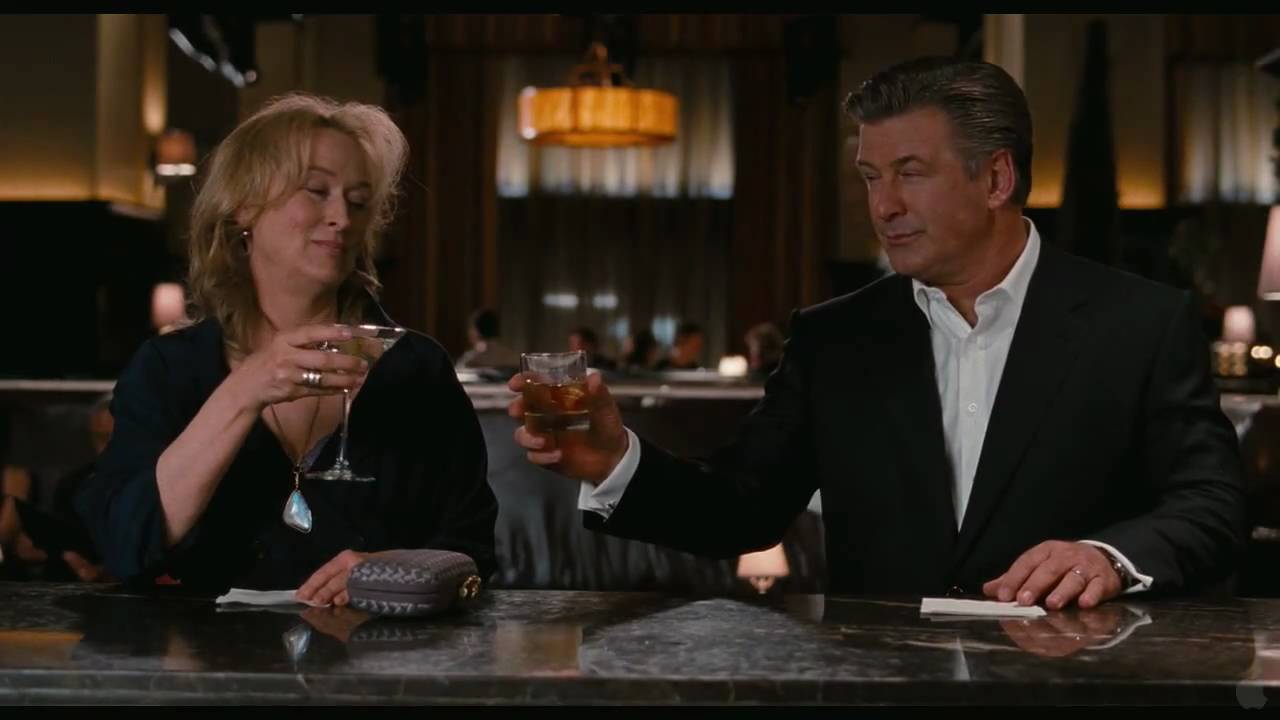 That isn't to say there aren't funny moments. Seeing middle-aged people smoking pot and going through the effects is always funny, as is a scene where Baldwin's character passes out right before they have another encounter due to, shall we say, a middle-aged man's medical condition. However, there is something slightly creepy about seeing a group of women celebrate that their friend is having sex with a man who dumped her ten years earlier. I felt bad for Rita Wilson, a talented actress who has been relegated to an endless parade of "best friend" parts who serves only to encourage the main character to do whatever the main character's suppose to do. John Krasinski, who plays Ja(k/n)e's eldest daughter's fiancée, does what he can with a limited role but here I find one of my main issues with It's Complicated: only in movies would lovers meet in the same hotel AT THE SAME TIME that the daughter and fiancée are there. We don't need these coincidences, and they never are believable to begin with.

There are a few other things that bothered me about the film. Ja(k/n)e's three children should be in their mid-to-late twenties, yet when they discover their parents are having an affair (yes, that scene WAS very funny--a naked Alec Baldwin always good for a laugh), they all look slightly traumatized. You'd think after ten years they would have gotten over it, but I guess not. Also, Agnes' child Pedro was the singularly most annoying child I've seen on screen in a long time. If I were Jake, I would have left her just so I wouldn't have to deal with him no matter how great the sex was.

Ultimately, It's Complicated is a mindless, forgettable little film with a few funny moments. It does prove what I have taught people for the longest time though: Never Marry Your Mistress.