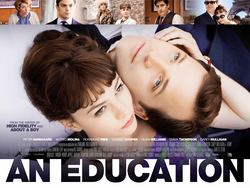 The bad thing about experience is that it teaches you after the fact. This appears to be at the heart of An Education, a respectable film about the conflict between pursuing dreams for a potentially bright future or going after a dazzling present.

Jenny (Carrie Mulligan) is a bright British girl who yearns for a life away from her respectable middle-class life, epitomized by her parents Jack and Marjorie (Alfred Molina and Cara Seymour). She is into all the things they are not: music, the arts, French. In short, she is desperate to discover the world her parents seem almost afraid of, to break away from respectability. While waiting for a bus in the rain, she meets David Goldman (Peter Sarsgaard), an older man who is also Jewish. He soon puts her in his world, one where people go to auctions, attend concerts, and stimulate her intellect. As she is swept into this new world she seems to forget all about Oxford or the young boy who is clearly smitten with her. David's relationship with Jenny is complex: not quite sexual but not quite intellectual either. In spite of his bourgeois anti-Semitism Jack is all too eager to have David squire his daughter out, perhaps seeing this as a way to relieve his burden of paying for university. However, Jenny soon senses that things are not as they appear with David or his friends Danny and Helen (Dominic Cooper and Rosamund Pike).

An Education is a strong portrait of a girl who comes of age in every way possible. It would be difficult to portray the situation of a man in his 30s having any kind of relationship with a girl about to turn 17, but director Lone Scherfig and screenwriter Nick Hornby never make it salacious or tawdry. This is due primarily to the fact that the story centers more about Jenny's mental and emotional growth than to some sexual awakening. As portrayed by Mulligan, Jenny is already in some ways quite mature, but in other ways terribly naïve. She balances her intelligence, innocence and yearnings brilliantly. Jenny knows there is something off about David, but she also knows he's opened up a world she wouldn't have encountered without him. Sarsgaard also manages to make David likeable and charming but also complex. We never fully understand his motivations when it comes to Jenny. A plot twist would make us think it involved lust, but we also see that he too is conflicted, drawn to her mind and intellect but also to her body. Even the smaller performances like Dominic Cooper, Rosamund Pike, and especially Molina are handled deftly. Each of the actors manages to create a fully-rounded character with limited screen time. Special mention should be given to Emma Thompson, who has only two scenes in the film as Jenny's school Head Mistress. I found myself quickly loathing her and thinking she was a bitch for her actions in both scenes, but that shows what an amazing talent Thompson is. She is able to make what could be called a cameo extremely memorable.

As a side note, we know that there is something curious in David when he convinces Jenny's parents to let her go up to Oxford so that she can meet C.S. Lewis, whom David refers to as Clive. For someone who has a cursory knowledge of Lewis, we know he and his circle never called him 'Clive' but 'Jack'. An intimate of the professor and Christian apologist would have known that, and the fact that David didn't should have been the first clue.

The one issue I raise about An Education has to do with her parents. I wondered why Jack and Marjorie seemed so oblivious to the fact that the man who was all but in name courting their daughter was obviously twice her age. That struck me as quite odd, and I had those doubts as I left. Were they dumb, clueless, or too dazzled by David to see what was going on?

As it is, An Education lives up to the title. Jenny learns through experiences of all kinds who she is, what is important, and how to take what she has learned to avoid the mistakes she's seen others make. Her experiences have made her a far better woman than she would have been without them, and she has learned well.