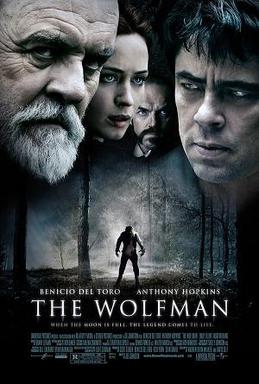 
There is no reason to regard the original The Wolf Man as an untouchable classic. In fact, it's a surprise that it hasn't been remade sooner, seeing as how other Universal Pictures monsters such as Dracula and Frankenstein have gotten the remake treatment. Perhaps it is good that this version has come at the time it did, seeing as how wolfmen have suffered in recent years. They are in danger of coming across as sex objects: young, muscular, brainless (and usually shirtless) teenage boys who exist only to bring the third point to insipid love triangles involving vampires and even more brainless teenage girls (one hint as to what I'm referring to). The Wolfman now reminds us of what they really are: dangerous monsters who are a genuine threat to all those who don't suffer from lycanthropy. Pity the film itself didn't manage to communicate that as well as it could.

Ben Talbot (Simon Merrells) has disappeared. His brother, Lawrence (the utterly British Benicio Del Toro) has been contacted by Ben's fiancé, Gwen (Emily Blunt) to return to Talbot Hall. When he does and is reunited with his father, Sir John Talbot (Anthony Hopkins), it is too late: Ben's body has been found, violently mauled. The Gypsies nearby are held to blame, and a group of vigilantes come to take matters into their own hands. Luckily (or unluckily) we find out that they are not responsible, and Lawrence falls victim to a wolf. Inspector Abberline (Hugo Weaving) is investigating the rash of violent attacks, and comes to a shocking realization. Now, with a full moon, Lawrence himself turns into The Wolfman, and must confront the evil within him as well as a dark family secret.

While watching The Wolfman, I found myself in the odd position of enjoying it far more than I should have. The film goes to great lengths to capture the dark, Gothic mood it requires, and it did it well thanks to the work of cinematographer Shelley Johnson and the music of Danny Elfman (who has been hit and miss for me, here a hit). Overall, it has the look and mood of a dark, mysterious English moors. I also enjoyed the fact that The Wolfman didn't fall into the temptation of using massive amounts of Computer-Generated Imagery to capture the creature's transformation and attacks. In certain ways, it was almost retro. This has to be the stamp of legendary make-up master Rick Baker (who curiously won the inaugural Best Make-Up Oscar for another variation on the theme of lycanthropy, An American Werewolf in London). That is one of its pluses: that you didn't get the sense that it was ALL done by computers.

The minuses are that you got the sense that almost all the acting WAS done by computers. We are suppose to believe Benicio Del Toro is this great Shakespearean actor before being compelled to return to Talbot Hall. However, for most of the film he has a very curious and distant manner to his performance, as if he isn't quite sure what he's suppose to do in the film or even if he's suppose to be IN the film (seeing that he is one of the producers, the latter doesn't seem likely). Blunt is all breathy delivery and appears to be holding over some of The Young Victoria manner to her. As for Hopkins, he certainly is having a good time knowing he is in a B-picture. Weaving brings intelligence to his Inspector but since he isn't at the center of the film doesn't add much. I will say that it is a pleasure to see Geraldine Chaplin in a cameo and I surprised myself that I recognized her. She has aged gracefully since her debut in Doctor Zhivago forty-five years ago.

There is another issue in the script by Andrew Kevin Walker and David Self. It never fully exploits the situations it puts the characters in to their greatest potential. There is a scene where Lawrence is brought before a group of scientists to force Lawrence to realize that if he sees a full moon, he won't turn into a werewolf. This should have been a great scene of tension and terror, but oddly, I never got a sense of fear or excitement. The shocking twist could be seen easily and frankly doesn't come as a shock. It also has some rather idiotic dialogue and a little creature that looks so much like Gollum that the people behind me started calling out, "My Precious, My Precious".

Of course, the blame for the story falling more times than succeeding rests on director Joe Johnston. One thing I would take him to task for is in the gruesome nature of the attacks. They were at times a bit too graphic when less would have been more. I also think the ending could have been handled better and while not leaving the door open for a sequel there is shall we say a slight crack (one I suspect won't be taken).

In spite of all the things that were wrong with The Wolfman, I enjoyed it enough to think well of it. I was entertained and when I left I thought it was money well spent for an hour's worth of my time. I should have disliked it because it could have been much better. However, I thought it was sometimes fun, sometimes effective in capturing a Gothic sensibility, and in the right spirit, a howl of a good time.
DECISION: C +
Posted by Rick at 12:42 PM