The Princess and The Frog: A Review

THE PRINCESS AND THE FROG

Give Me A Kiss to Build a Dream On...

It has been a long, long time since the Walt Disney Company has made a two-dimensional animated film. With The Princess and the Frog now out, all I can say is that it was worth the wait and wonder why they left it in the first place. The film is not a retread in nostalgia but a beautiful film in its own right about how dreams can come true (a Disney staple) with a wish and some hard work.

Tiana (Anika Noni Rose) is a young girl from New Orleans who dreams of opening her own restaurant with her father (Terrence Howard). Even after his death she still carries their dream while maintaining a busy work life...and no social one. Enter one Prince Naveen (Bruno Campos) from Maldonia, who loves jazz and girls, both of which are plentiful in N'awlens (trying to sound like a native here). However, the prince is low on funds (low meaning none) so he decides to marry Charlotte (Jennifer Cody), Tiana's childhood friend and the daughter of the richest man in town, Big Daddy LaBouff (John Goodman). This union fits into the schemes of Dr. Facilier (Keith David), a voodoo priest also known as The Shadow Man. Together with Naveen's valet, Facilier turns the prince into a frog. Naveen escapes and encounters Tiana, who he mistakes for a princess that can break the spell. Very reluctantly, Tiana kisses him but finds HERSELF turned into a frog. The only one who might know how to break the spell is a voodoo priestess, Mamma Odie (Jennifer Lewis), and so they travel the bayou with Louis, a jazz-loving trumpet-playing alligator (Michael-Leon Wooley) and Ray, a Cajun firefly (Ray Cummings).

Much has been made of the fact that The Princess and The Frog has its first African-American princess (another stab at diversity like with Native American princess Pocahontas and Chinese princess Mulan) and it is happy coincidence that the character of Tania comes at the time when America has its own real-life African-American princesses in Sasha and Malia Obama. It may have been done to make a princess that a certain segment could relate to (my Hispanic female relatives never having a problem identifying with any Disney Princess, but I digress), but it makes perfect sense given the setting of New Orleans and the surrounding Louisiana bayou country.

The location is also perfect to showcase the extraordinary range of music to come from the Pelican State courtesy of Randy Newman (with the closing song, Never Knew I Needed, by Ne-Yo). The music does what all good film songs should do: serve the story by either expressing the character's feelings or moving the plot along AND be memorable. You have the requisite jazz (Down in New Orleans and When We're Human) but you also have the great zydeco numbers Gonna Take You There and the beautiful and haunting Cajun ballad Ma Belle Evangeline (which I think is the best song in the film, Academy be damned). You even get a bit of gospel with Dig A Little Deeper. The Shadow Man (who to me looked a bit like Little Richard) has his own number, Friends On The Other Side, which is remarkably scary thanks to its voodoo setting and first-rate animation. 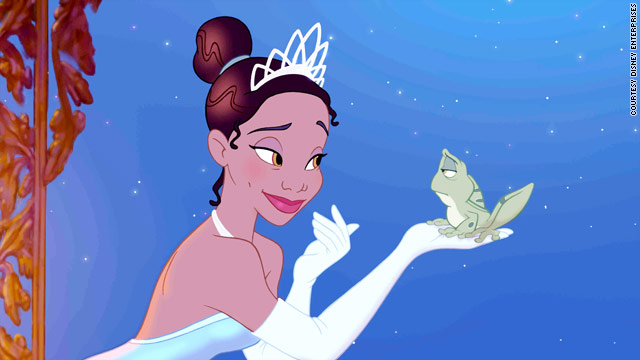 This films should put to rest the idea that has come of late that 2D is somehow inferior or less expressive than computer-generated animation. The Princess and The Frog creates a magical world where the traditional cel animation enhances the story. On a personal note, I had come to fear that future generations would shrink in horror from 2D films because they have been inundated with CGI in the Shrek or Cloudy With A Chance of Meatballs vein. There is nothing wrong with using the latest technology (if anything, Walt Disney was the first to grab onto the latest innovations and even creating a few) but in traditional hand-drawn animation (with a little bit of help from computers) there is a magic, a sense of fantasy that other films in their eagerness to appear real miss.

The Disney Studios, however, is not afraid to experiment: the Almost There number has a vaguely Art Deco style that is a departure from previous films, but it's a welcome one. As a side note, after Precious, I think it is wonderful to see a loving, positive portrayal of African-American family life on the screen.

The voice work is excellent. I single out John Goodman as Big Daddy as being the only one I recognized instantly, but I figure it would be impossible to have a good New Orleans film without Goodman. It would be like having an album of New Orleans music without Dr. John--it just isn't done. David made his Dr. Facilier both menacing and fearful of his "friends on the other side", and Rose and Campos were delightful as the no-nonsense Tania and overly self-confident prince. I must confess to not recognizing Oprah Winfrey as Tania's mother Eudora but in my defense I don't watch much television apart from Turner Classic Movies, FOX News, MSNBC (I believe in seeing both sides of an issue) or repeats of The Golden Girls.

There were a couple of aspects that I wasn't too thrilled with. Charlotte unintentionally brought back memories of Missy Anne from Roots, and at times I found her a little annoying. There was also a line that the realtors used that I found curious. When they tell her that someone else has made an offer for the property she wants they mention that "a girl of your background" should be used to waiting, or something to that effect. I thought it was a curious phrase to use.

Still, these are minor details. We get emotionally invested in the characters, we get great songs and no spoiler here Happy Endings All Around. I think it's fitting that The Princess and The Frog, the first Disney animated film with an African-American heroine, get the exact grade the first African-American President gave himself for his first year in office.