A Great Day in Harlem: A Review 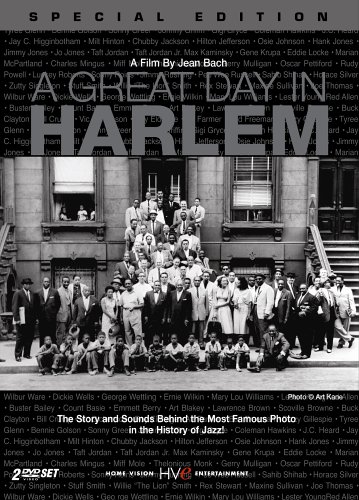 A GREAT DAY IN HARLEM

A Picture is Worth a Thousand Songs...

The course a musical genre takes is one that I find endlessly fascinating. There was once a time when people would sing arias on the street and the average citizen would think it perfectly natural in attending an opera. Now, classical music is seen as only enjoyable to those in a high-income bracket. The same for Broadway musicals. At one point, Louis Armstrong's rendition of the title song of Hello, Dolly! beat out The Beatles for the top spot on the Billboard charts. Now, while Armstrong is well-known (and I'd argue, so is the song Hello, Dolly!), it's highly unlikely that Stephen Sondheim will topple Britney Spears on the radio.

Speaking of Armstrong, jazz is now in the same boat as classical. Jazz was once the mainstay of juke-joints, played in the most chic of clubs and on the radio. It was THE music of the average man. People like Benny Goodman, Artie Shaw, or Dave Brubeck were common names in American households. Now, jazz too has been relegated to the wee hours of National Public Radio. Music that was once considered beneath people is now considered as too artistic to be enjoyed. A Great Day In Harlem, the documentary about a photo of jazz greats, reminds of a time when people still thought jazz was still regular music and of when artists still cared about how they were seen.

It's 1958 and Esquire Magazine is going to have an all-jazz issue. Novice photographer Art Kane is hired to get together a collection of all the jazz musicians he can find to have a group picture taken of them. From that photograph, stories flow as smooth as a solo.

Some of the names of those who were there and/or share their memories are generally known to the public (Dizzy Gillespie, Art Blakey, Count Basie, Sonny Rollins, Marion McPartland, Thelonious Monk, Gene Krupa), and some are known more by jazz aficionados (of which I can't say I am one): Mary Lou Williams, Oscar Pettiford, Henry "Red" Allen. A Great Day in Harlem mixes the memories of the subjects of the photo who were still alive in 1994 when the film was made with performance clips of both the living and the dead.

What performances they were. The artistry of the performers is amazing and the talent they had remarkable. Even more remarkable and effective is the respect and admiration they had for each other. McPartland, for example, talks in glowing terms of Mary Lou Williams, a pianist and arranger like herself. It is a testament to the professionalism of these jazz giants that they knew talent when they heard it and did not let their own egos make them deaf to great performers. The film benefits from the fact that the photograph itself is not the only one taken that day. Mixed in with the memories of that moment are photographs taken by others as well as home movies.

A Great Day In Harlem makes it clear this was almost a bit of a reunion of sorts. So many of the performers would have been on the road or resting from performing at night so getting even the 57 subjects together would have been a challenge to the most expert of photographers, let alone someone like Kane, who was barely starting out. Everyone, it seems, was having a good time, seeing old friends, friendly rivals, and artists they respected. The film also has amusing but true-to-life anecdotes. We find out that they all unconsciously congregated to those of the same instruments: pianists gathered with other pianists, drummers huddled together. We also get a delightful tale of why Monk was nearly late for the picture: he agonized over what to wear.

This bit of information made me reflect that in 1958 even the most Avant-garde of musicians would still care greatly about how he/she looked when being photographed. A Great Day In Harlem in its own way, is more than just the story of a single picture. It's the story of a now-vanished world: vanished because as of today only 5 of the 57 subjects are alive as of today, vanished because jazz is no longer considered the hippest thing going, vanished because artists (musicians, actors) don't think much about appearing in public looking like they just got out of bed or an insane asylum. We learn not only that Monk wanted to look his very best (and dress in a way that drew attention to himself) but that Red Allen always appeared in a suit and tie. Name me the last pop/rock musician of the current generation that takes that much care in how he/she appears on stage or on the street (Michael Bublé may be one, but his style lends itself to being a bit of a throwback to that era).

A Great Day In Harlem is the correct name not just for the picture, or the film, but for the era. It captures a time when artists knew each other, respected each other, and celebrated their achievements. It got together great artists and great performances, and it is a great archive of a time when we all knew all that jazz.