The Towering Inferno: A Review 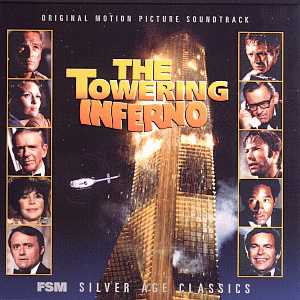 
It's a genre onto itself: the disaster film. There are certain elements any Good Disaster Film must have: a gaggle of big stars, a variety of backstories that culminate at one location, a massive natural/man-made catastrophe that throws them all together, a few of the stars dying, and even a signature song. The Towering Inferno I believe is the last great disaster film, one that was both exciting and made you care about the fate of all involved.

It's the grand opening of The Glass Tower, a combination office building and apartment complex which is the newest skyscraper in San Francisco and the tallest in the world. Architect Doug Roberts (Paul Newman) makes last preparations to make sure everything is in order while having time to fool around with his girlfriend Susan (Faye Dunaway). Meanwhile, the owner Jim Duncan (William Holden) and Roberts discover that Duncan's unscrupulous son-in-law Roger Simmons (Richard Chamberlain) has cut corners with the materials used to build The Glass Tower. At the same time, con artist Harlee Claiborne (Fred Astaire) is coming to the dedication party in an effort to woo rich widow Lisolette Mueller (Jennifer Jones) and bilk her out of millions. Coming to the dedication are the creme de la creme of society as well as powerful figures like Senator Gary Parker (Robert Vaughn). While the party is going on, the shoddy construction has caused a small fire that begin others, and soon all these characters are trapped in a Towering Inferno. The head of the rescue operation is Fire Chief Michael O'Hallorhan (Steve McQueen), and it becomes a desperate struggle for everyone to survive. Some of them don't. Producer and co-director Irwin Allen knew how to make this type of film. He obviously had enthusiasm for the project and it comes through on the screen. A film like The Towering Inferno can't start out with the big fire (or overturned ship, or any other type of disaster) but must rather allow us time to get to know the characters and put them in this desperate situation. It's only by caring about what happens to them, by identifying with them and their crisis can one have a successful film, and The Towering Inferno does that brilliantly. The film builds up the anticipation of the explosions and it never lets up. The script by Stirling Silliphant does a magnificent job of cutting off easy escapes that raise the stakes again and again.

All the technical aspects of The Towering Inferno are blended perfectly. It is extremely difficult to distinguish between miniatures and other photographic effects (what Allen could have done with CGI). Throughout the film, I kept thinking the music score was excellent, and it wasn't until the closing credits that I discovered why: none other than John Williams wrote the score. Even the Oscar-winning song, We May Never Love Like This Again, is seamlessly blended into the film.

Beyond all the wizardry of the production value, the performances are excellent. Paul Newman doesn't strike me at first as the type of actor who would appear in what would have been an essentially B-Picture. He may have been too intelligent for the material, but his performance shows that he is taking the material seriously even though the plot may be somewhat outlandish. He gives a sold performance as a man in this situation who is determined to get out of it alive. Faye Dunaway is also intelligent in her interpretation of Susan, a woman who loves her man but also her career. Although she doesn't have as much to do as she could have, she still manages to make her few moments quite effective (and it doesn't hurt that she is extremely beautiful).

Fred Astaire gave his strongest dramatic performance of a man reformed and showed he didn't need to dance to have the audience look at him (though in fairness, he does dance a little at the party and shows that at age 74, he still had the moves). Chamberlain I found delightful as the sneering villain. It looked like he wasn't taking the film as seriously as perhaps everyone else was, but he is amusing at the scene where he's obliviously drunk as the world literally goes up in flames. As Astaire's love interest, Jones didn't have much to do either (is it that the women weren't given a greater focus) but she had her moments when rescuing her neighbor's children.

For my money, the star is Steve McQueen. He is perfectly calm, cool and collected as Captain O'Hallorhan, someone who knows what he's doing and does it without complaint (well, with some complaint). His magnetism is undeniable, but his performance throughout the film is that of a complete professional. Perhaps he and Newman had difficulties about billing, and perhaps McQueen could be a terror to work with...I wouldn't know, I wasn't there. Whatever the case may be, Steve McQueen epitomized 70s-era coolness, and The Towering Inferno is no exception.

I have one complaint about the film. Yes, I was entertained (though at times certain scenes felt rather long). The length, however, isn't my complaint. Without giving too much away, I was disappointed not to see O.J. Simpson burn as if he were in Hell (though whether he will in the future is still up for debate). Overall, The Towering Inferno knows what it is and does it brilliantly, lighting up the screen to full effect (sorry, couldn't help myself).