A Saint In the Theater

Eva Marie Saint introduced two of her films at the 2012 Plaza Classic Film Festival.  The first, North By Northwest, I could not attend.  One, it was either by invitation or $20.  Not having received an invite (even after two requests for a press pass as a member of the Online Film Critics Society went unanswered) or having $20 just lying around made it difficult to go.  Two, the screening at 7 p.m. would have made it impossible given that I leave my paying job at 6:30 p.m. and the drive from work to the theater, with all the construction on Interstate 10 going on, takes a good forty minutes if traffic isn't against me.

This is why I asked for and received permission to leave one hour early for Friday, August 3.  I wasn't about to miss the second chance to see Miss Saint, this time for On the Waterfront.  This won't be a review of On the Waterfront, but more a short reflection on Miss Saint's talk prior to the screening.

The stories about the making of On the Waterfront were interesting.  Elia Kazan, whom Eva Marie Saint would always call by his nickname of Gadg, gave her a strong direction when having a love scene with Marlon Brando.  This was her first film, so she was a bit hesitant, but Gadg told her to think of her husband, and that solved the issue.

The famous scene where Brando picks up her glove and puts it on before handing it back to her has been the source of much discussion, but Saint decided to give the definitive version.  Popular legend has it that this was done on the spot, and that Gadg decided to let things keep rolling in order to 'capture the magic'.

It ain't necessarily so, according to Miss Saint.  According to her, Saint did indeed accidentally drop her glove, and Brando did indeed start to use it, but that was done during rehearsal, not live on camera.  Kazan, having observed this, decided to keep this and use it in the final filmed version.  This added a strong sense of the growing intimacy between Saint's Edie and Brando's Terry without actually having them touch. 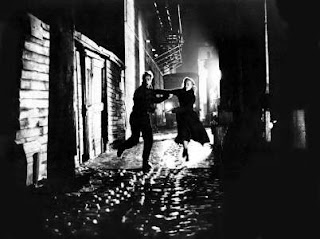 One thing Miss Saint said WAS an accident was when they were being chased.  According to her, the door which they were meant to escape the truck was left locked, surprising Brando.  With the truck coming full steam ahead, he was forced to break the glass to get in and pull Saint in just in time.  THAT, and the cut Brando suffered (along with the flow of blood), was not planned but kept in.

She recounted how they filmed on location, and after a few days (a week I believe) the crowds stopped applauding and just wanted them to leave.  Saint does remember that the apartment which was meant to be her father's did belong to a real couple and that she asked the production crew to put it back exactly as they'd found it.  Saint doesn't remember if they kept their word.

Finally, she commented on how the decision to shoot the film in black-and-white was a good decision.  "It's more honest, it's more truthful," Eva Marie Saint said about black-and-white film.  It's a curious thing given that she got a royal color presentation in North By Northwest, but one can see her point.  North By Northwest is a lavish picture, one flowing in fantasy, so color is the best choice for it.  On the Waterfront, on the other hand, is geared to be more realistic, gritty, of the lower side of life, among the working class rather than the wealthy.   Black-and-white, therefore, makes sense here.

Truthfully, this is all I can recall from Miss Saint's pre-screening chat, which sadly was sparsely attended (I would put the showing at less than 100 people).  Still, for those of us who did go see Eva Marie Saint talk about On the Waterfront, it was a delightful memory that one will always have.

Pity one can't have any pictures of it...or can they?  Only if they snuck a camera in and were discreet...not that ever happened.
Posted by Rick at 11:19 PM