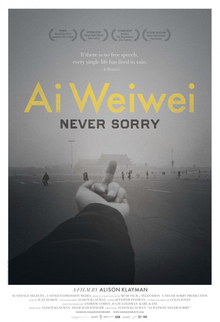 I am not much for modern art, finding a lot of it pretentious and a bit silly (cows in formaldehyde?).  Therefore, I might be expected to take a wary eye towards the works of Chinese artist Ai Weiwei, but I found two things after watching Ai Weiwei: Never Sorry.  One: if people bother to explain what appears to be rather opaque works, one can get a richer and more enjoyable experience through the arts.  The idea that modern art in particular should not be explained because if it isn't obvious to a viewer then said viewer is 'stupid' is a bit insulting.  Education is vital for art appreciation.

Two: courage to face down bullies and thugs does not necessarily require guns.  One can easily use mockery and detailed records against those who would suppress and silence unpleasant truths.  Ai Weiwei is a man who provokes the Chinese Communist authorities, but does it with a smile, his wit, his Twitter, and his art.

Writer/director Alyson Klayman follows Ai as he mounts exhibitions in London and Munich as well as his travels in China.  Ai has worked outside the official Chinese art scene with provocative pieces, such as a series of photographs of him dropping an ancient vase or painting the Coca-Cola sign on another.  He also is one that has had his worldview shaped by events in his life that have shown him how the Chinese government has been systematically abusive and deceptive.

The Ai family (as is tradition in China, the family surname goes first) endured the Cultural Revolution where Weiwei's father was denounced by the Red Guards as a 'counterrevolutionary'.  Once the family was allowed back from their forced 're-education', he was one of the first to go to the West to study and create.  In New York City,  Ai thrived and saw how democracy worked.  The Iran-Contra hearings were a revelation: the idea that the government would broadcast an investigation of itself was something that would never happen in China.

Once he returned to China, he continued to work, sometimes in the underground art movement where he and his fellow artists had freer expression.  He also was gently nudging the nation towards the idea of more freedom, thumbing his nose (and using other fingers) to make his views known.

The 2008 Sichuan earthquake infuriated Ai.  The government wanted to keep the exact number of children killed because of poor construction secret, especially with the Beijing Summer Olympics being the same year.  The Chinese Communists wanted to present the best face to the world, but they didn't count on Ai Weiwei.

Ai wouldn't let this go.  He started his own investigation, collecting the names of the children the government didn't want to admit died because of corruption and ineptness.  Ai used his blog and Twitter accounts to publize his work, keeping the pressure on officials while never being overtly anti-government.  Ai would be provocative, but not confrontational or violent.  Instead, he would turn their own rules and actions against them.  For example, after the Shanghai studio they had asked him to design was shortly afterwards torn down because of his actions, he opted to throw a demolition party.

Ai's actions inspired subtle protests from others.  Once while continuing his investigation of the shoddy buildings that killed thousands of schoolchildren, he took to Twitter to announce merely where he was dining.  At the open-air restaurant, people would just 'happen' to be passing by and wish Ai well.  When the Chinese government presented Ai with a million-dollar plus tax bill, ordinary citizens would send in contributions, a quiet protest against blatant injustice.

Ai Weiwei: Never Sorry covers his life, some of his works (and as an art novice it was nice to hear others explain things that might look a bit puzzling, like how the destruction of the ancient vases was his way of expressing discontent with how people's home were being destroyed for no reason), and his courage in prodding the Chinese Communists to show just how hypocritical and ridiculous they were.  During his investigation of the Sichuan earthquake victims, the police broke through his hotel room door in the middle of the night, injuring him.  Ai would continue to lobby protests after protests in the police offices, even if he would get nowhere and the police were obviously lying.

What we see in Ai Weiwei: Never Sorry is a provocateur who is almost giddy with the idea of mocking those in power, a revolutionary with a sense of humor.  He admits to being fearful, but he realizes something most people don't: courage is not the absence of fear, but the acknowledgement of it and still continuing the work.

Ai Weiwei is someone who knows that transparancy and freedom are vital, not just for art but for living.  He sees that the Chinese government is unfair by its actions: imprisoning dissenents (including during the course of the film, Ai himself), keeping things it considers embarrasing secret (such as the exact number of children needlessly killed through their own actions), and he knows this to be wrong.  Yet his actions don't call for violent overthrows or taking up arms.  Instead, Ai uses his art and his voice to speak out against the actions of the government.

In truth, Ai Weiwei has shown what has always been true: there is nothing so irritating to a dicatorship than a troublesome man.  He delights in his actions, treading as carefully as he can while still being provocative, afraid but unwilling to submit.

I had heard the name Ai Weiwei but knew little of the man or his works.  Ai Weiwei: Never Sorry is a revelation of both a creative man and a man of conviction when so many are quiet or speak softly.  He lets his voice be heard, damn the consequences.

As a film, Ai Weiwei flows easily between his past and present, between an exploration and understanding of his art and of his political activism.  While it does give us some insight into his private life, it doesn't take on how his wife feels about his child born to another woman.  This isn't a flaw in Never Sorry but one gets the sense that the curiosity about the how of his child's birth or how Mrs. Ai feels about all this is a subject they'd like to explore but don't want to touch.

A minor detail, as Ai Weiwei: Never Sorry is both profile of an artist and a profile in courage.


The Artist As Citizen.
The Clown Prince of Protest.
The Provocateur of The Middle Kingdom.
A Man of Courage.