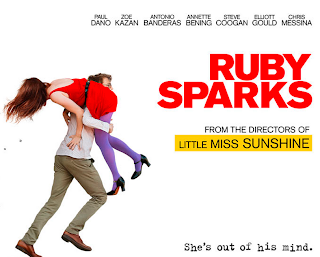 Ruby Sparks is a delightful and clever update of the Greek Pygmalion myth (that of a creator falling in love with his own creation).  Granted, while it's not a perfect film, Ruby Sparks shows a greater wit and understanding of the foibles of lovers than most rom-coms today.

Although he loathes the word, Calvin Wier-Fields (Paul Dano) is considered a genius.  He struck literary gold at 19 with his debut novel, Heart Broken Old Times.  It is now ten years later, but despite a collection of short stories and a novella, Calvin has a monstrous case of writer's block.

Side note: that would make him our generation's Truman Capote, but I digress.

Still, after a decade, everyone from his publisher to his agent (Aasif Madvi) to his literary champion/rival (which would make him Calvin's frenemy) Langdon Tharp (Steve Coogan) are all waiting his newest creation.  Try as he might, Calvin just can't get the words out.

Welcome to my world, kid.

As it stands, Calvin tries but cannot get anything written.  Worse, he still is recovering from a bad breakup and has no love life.  With the encouragement of his therapist (Elliot Gould), he writes about the girl from his dreams.  He creates this girl, all her traits, all her past, and names her Ruby Sparks.  One day, to his total shock, Ruby (writer Zoe Kazan) is right there at his apartment.

At first he thinks he's going insane, but it soon becomes clear everyone else can see Ruby.  She is very real, and he now has found the girl of his dreams.  A great romance grows, but Calvin won't make her his love slave, much to the chagrin of his brother Harry (Chris Messina).  However, Ruby starts growing bored with her life and starts seeking a world of her own.  This comes to a head when she and Calvin go to see his mother Gertrude (Annette Bening) and her boyfriend Mort (Antonio Banderas).

Calvin won't let Ruby go, so he writes that she stay with him.  Since he can control her life, she now becomes too clingy (at one point not moving from the street corner because he actually let go of her hand).  Eventually, after a run-in with his ex and catching Ruby about to take a dip in the pool with Thornton, he reveals that he controls her.  A horrified Ruby hides, then leaves.

Out of all this, Calvin is able to write again, and his new novel, The Girlfriend, reestablishes his reputation and he accepts the label of genius.  At the end, he finds a girl with his book, a girl who looks just like Ruby, with whom he starts a nice conversation...

Co-directors Jonathan Dayton and Valerie Faris, in their follow-up to Little Miss Sunshine, picked the right material for their next film.  It has the right amount of whimsy mixed with acceptance of the premise.  Dayton and Faris direct everyone to where we accept that all the characters, even Ruby, are all real, and the situations don't shy away from being dark.

For example, when Calvin reveals to Ruby that she is the product of his imagination, the film doesn't shy away from making the scene particularly painful for all concerned.  However, it's a credit to both the directors and Dano as an actor that Calvin doesn't come across as creepy or evil, but actually tormented.

This scene is brilliantly done with Dano showing the desperation of not letting Ruby go versus his manipulation of this girl.  Dano, who is growing in stature as one of the best younger actors around, keeps a strong balance between Calvin's creative paralysis and his yearning for love.  He didn't create Ruby in order to get a girlfriend, but now that he has, he starts out enjoying Ruby for herself.  It's only when she begins to exert her own independence that he becomes manipulative, but once he finds that Ruby is no longer falling for him as much as taking orders from him, he makes Calvin's evolution one we care about.

Kazan, who wrote the story, doesn't make Ruby into a dumb girl who merely takes orders but a woman in her own right, who also is unwittingly controlled by the man she thinks she loves.  As a side note, one wonders because Kazan is a woman, she opted not to go the route of what would be a typical male fantasy: have Ruby serve as a sex slave.  Instead, Kazan decided to make an actual movie that appealed to adults by taking the scenario and making it as realistic as possible.  She also decided that Calvin wanted love more than he wanted sex.  Now, I'll say that this idea is more from a woman's perspective than it is a man's (who would almost always think on sex more than love) but the benefit of both Ruby Sparks and the teaming of Kazan and Dano is that the situations are played straight and the leads don't come off as either stupid or manipulative (although sometimes they come close).

Messina adds the moments of comedy as the brother who thinks Calvin has lucked into a brilliant set-up but who also is allowed moments of seriousness.

I also take the time to compliment Nick Urata's score, which also kept the balance between whimsy and darkness without overpowering or drawing attention to itself.

There are a few things that do veer into silliness.  When Calvin is with his psychiatrist, he asks for a toy bear to cuddle (making one wonder if he's in an odd state of arrested development).  While his trip to Big Sur to see his mother and boyfriend is interesting, it doesn't add a lot to the overall story save to show how Calvin became so buttoned-up.  His father is supposed to be a large shadow over his life, but we learn very little about him or how Calvin was affected by his life or death.

That's about it for anything that I found to criticize about Ruby Sparks.  The story held up very well, the acting was strong (particularly by the leads) and it takes its premise seriously and handles the story accordingly.  Ruby Sparks doesn't attempt to be too witty or clever but it is smart and entertaining.  Ruby Sparks is a good film...long story short.