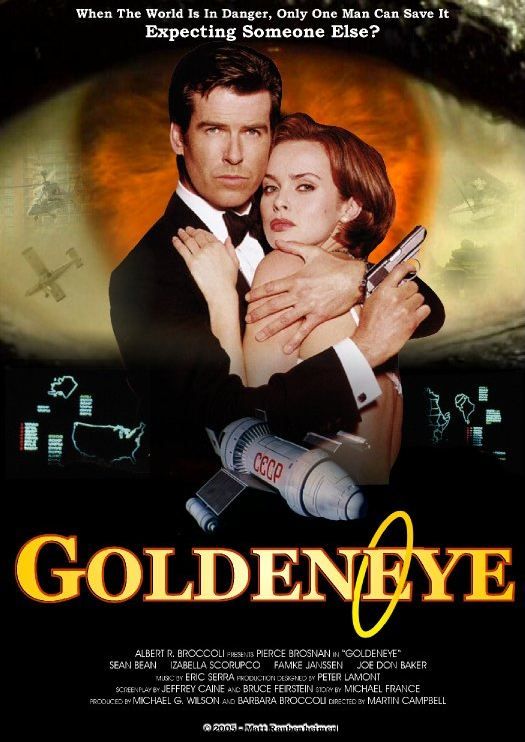 With GoldenEye, we have a whole new team to the James Bond franchise (except for the producers): new Bond, new M, new Moneypenny, new title sequence.  It's almost a reboot before the phrase became popular.  We can't say that in GoldenEye we're suppose to forget everything that comes before: there are little hints of there being a history in the continuing story of 007 (even within the story), but for all intents and purposes we're starting fresh.  To its benefit, GoldenEye moves Bond forward while still keeping some of the trappings of what a Bond film should be, and on the whole GoldenEye acknowledges the past, present, and future to make it a good Bond film.

We start in the then Soviet Union, where 007 James Bond (Pierce Brosnan) and his friend/co-spy 006 Alec Trevelyan (Sean Bean) break into a Soviet base.  The mission, however, goes wrong: they are discovered by Colonel Ourumov (Gottfried John), and while Bond escapes Trevelyan isn't so lucky.  006 is shot by Ourumov, and to make matters worse, Bond blows up the station three minutes early.

We move now nine years.  The Soviet Union has collapsed, and Bond is seen as an anachronism in so many ways.  None other than Miss Moneypenny (Samantha Bond, who I think is the only Bond to be in a Bond film) openly talks about sexual harassment, and the new M (Dame Judi Dench) calls him a sexist, misogynist dinosaur and relic of the Cold War.  Still, there is a mission to be handled.

Earlier, Bond had made the acquaintance of one Xenia Onatopp (Famke Janssen), a beauty who has stolen a new super-helicopter.  She is an operative for the mysterious Janus, and soon we see she is not only in cahoots with now Russian General Ourumov, but both have stolen the GoldenEye, a powerful mechanism that operates a satellite capable of disabling all electronics and bringing their destruction.

On a second look there are a few issues I have with GoldenEye.  In particular, I think the middle section is a bit padded.  Try as I might, I could never shake the idea that both Wade and Zukovsky were introduced to be continuing characters in future Bond films.  Now Baker (who, curiously, makes a return engagement to the world of 007 after being the villain in The Living Daylights)  and Coltrane are good as the wisecracking American and shady ex-KGB Russian respectively, but still, one wonders if GoldenEye could have done without them.  Don't get me wrong: there's something oddly hilarious is Baker's American casualness (who else has called Bond either 'Jimmy' or 'Jimbo'?) and Coltrane has a solid Russian accent, but GoldenEye appears to have them just for both plot exposition or to introduce them for more stories.

Side note: both Wade and Zukovsky would, like James Bond himself, return, so that theory does pan out, but that's for another time.

One thing I wasn't sure about was the actual story by Michael France with screenplay by Jeffrey Caine and Bruce Feirstein.  If we are to believe the story, not only did 006 manage to survive getting shot in the head but also the massive explosion with only some facial scarring.  Add to that the idea that 006, now Janus, somehow joined forces with General Ourumov in the interim.  Somehow, I keep thinking this is all rather too complicated.  I still think it might have been better to have had 006 simply disappear into the dark Soviet night while keeping Trevelyan's family past as part of the story.  With that, both Bond and Trevelyan have motives to go after each other.

I figure having M as a woman is suppose to make one wonder whether Bond, the ultimate ladies man, could figurative be under a woman's authority.  Dench doesn't have a large role, but she does command the screen and makes it clear she means business.

As for the main Bond girl, Scorupco starts out well as the innocent victim of Janus' nefarious scheme, and has good scenes where she tells Bond that he's basically crazy to be involved in all this killing for no purpose, but like most Bond Girls, she quickly falls into bed with him.  Well, some things never change, but I think Scorupco's Natalya acquited herself well and is a pretty good Bond Girl.

As a digression, given that Onatopp didn't technically sleep with Bond, I'm reluctant to call her a Bond Girl since that IS one of my requirements.  However, with a name like Onatopp...

The best performances are both from Brosnan and Bean.  In the case of the latter, he has the right amount of menace and murderous intent without going for a camp villain.  The fact that Bean plays it straight shows GoldenEye is trying to take things more seriously (even if the situation is on the bizarre side).  Brosnan easily slips into 007, a man who still enjoys the company of ladies but who also doesn't shrink from killing.  Brosnan plays the part well: a man who does indeed to it 'for England', as Janus taunts, but can also do it for himself.

In regards to other matters, the title theme, written by U2's Bono and The Edge, fits the idea of a Bond song: grand, lush.  Tina Turner, an icon herself, is the closest singer to come to matching Dame Shirley Bassey's powerful vocals in her three turns doing a Bond song.  However, I do question the logic of some of the lyrics to GoldenEye:

I don't know if this is referring to perhaps how Mr. Hewson and Mr. Evans would watch Bond films as kids (like all of us would), but when Turner sings that line in the bridge, it makes me wonder is there is a little bit of Lolita in the narrator.  One suspects the lyrics are about Bond, but it's a bit confusing if she's singing about him or about herself and her fixation with him.

Daniel Kleinman, taking over the late Maurice Binder for GoldenEye's title opening, does better than some of Binder's later efforts, and I suppose I'm slightly prejudiced in enjoying the figures of Lenin and Stalin being smashed by a bevy of beauties.  Still, the opening to GoldenEye reflects the lush nature of the song and acknowledges the reality the fall of Eastern Bloc communism has on the franchise.

That, and seeing the hammer and sickle getting smashed thrills me to no end.

What I didn't care for was Eric Serra's score, which was a bit silly at times (in particular when Xenia first appears).  The score was a little too electronic to fit the mood, and at times listening to the music was a bit distracting and irritating.

GoldenEye answers the question of whether James Bond, the Ultimate Cold Warrior, could still be relevant in a world where the Soviets, long his nemesis, no longer pose a threat.  The answer is, most definitely the world still needs Bond.   And that, my friends, is a good thing.