As An Actor, He Makes A Great Director

Where did it all go wrong?  Ben Affleck was suppose to be the Next Big Thing: a major movie star.

He had the looks, he had the Oscar, he had the swagger.  He had hit movies after hit movies really early in his career.  There was Armageddon, there was Good Will Hunting, there was Shakespeare in Love (a Best Picture Oscar-winning movie, no less), there was Chasing Amy.  Well, the last one wasn't a big hit but I'm told it showcased him in one of his best performances, and it did get a Criterion Collection release, which almost always means it's a good film.

With all that (and his chiseled abs), one would have thought Ben Affleck would have become a giant superstar.

Instead, his name on a marquee has a reverse effect, turning him from Golden Boy to Box Office Poison. 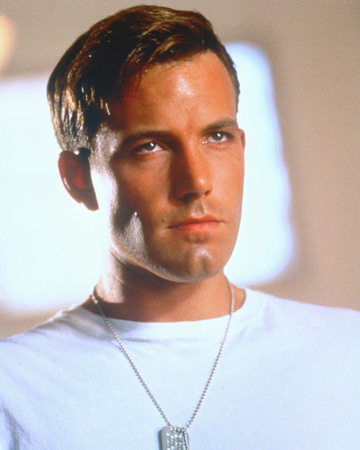 First, he was either given some really bad advise or had become so enamoured with himself that he truly believed his own publicity of him being the Next Big Thing, a true thespian and artiste and major movie star.  Both are very dangerous.

Affleck began picking projects that required less acting and more action.  Perhaps he wanted to become another Bruce Willis (his Armageddon co-star), but Willis at least has the sense to pick GOOD action films (the Die Hard films) along with more intellectual fare (Pulp Fiction).  Affleck, however, didn't have Willis' discernment.

Let's take a short stroll through some of Affleck's major projects.

Dogma: bomb (a bit of a cult film but a highly controversial one, at least to a Catholic.  Protestants don't freak out at the thought of Mary, Mother of Christ, having children post-Jesus).

Boiler Room: good film but he was more of a cameo.

Pearl Harbor: horrible film.  Granted, it made money, but what can you say about a World War II movie where you are hoping the Axis win?

The Sum of All Fears: bomb.  It begs the question, how bad can a film be if a Tom Clancy adaptation is rejected by the public?

Daredevil: bomb.  Hated by the comic book fans.  Now, in fairness I will say I enjoyed the film...but let me be clear.  I enjoyed it, I didn't say it was good.

In this brief overview, we see that Affleck was being geared towards action films.  His career was radically different than that of his lifelong bosom buddy Matt Damon.  Damon mixed in more highbrow work along with solid action films.  How else to explain Damon's ability to be both Tom Ripley and Jason Bourne and be believable as both?

The public, for whatever reason, didn't see him as an action star, and the few times he ventured into more character-based films (Changing Lanes or Bounce) the public wasn't buying the sensitive act either.  Richard Roeper (my quasi-nemesis) even mocked Affleck's pretensions at being a serious actor in his book 10 Sure Signs A Movie Character is Doomed.

In the chapter 7 Movies in Which Ben Affleck Cries Like A Big Fat Baby, Roeper ridicules Affleck's attempts at showing emotion by breaking out the water works.  And I quote,

And in four of those movies, he was wailing over the loss of male friends, for crying out loud.  I know it's the 21st century and it's OK for a man to show his emotions, but I don't think Judy Garland wept onscreen this much in her entire career.  And I know Steve McQueen didn't.

In case anyone is interested, those four movies where Affleck blubbers over guys are Armageddon, Pearl Harbor, Reindeer Games, and The Sum of All Fears.

Well then, what was the second thing that happened?

Jennifer Lopez entered his life and his bed, and Bennifer became a joyful distraction from life's worries.  Their fame soon overrode anything else, including perhaps, their thinking.  While the press was delighting in chronicling this megawatt romance, and Affleck and Lopez gamely playing along, they joined forces to create one of the most notable films in their repertoire, one that I'm sure will be highly featured should either of them earn a Kennedy Center Honors. I understand Affleck loves to be thought of as a highly intellectual fellow, one who has deep thoughts about the issues of today.  HOWEVER, no person would have thought Gigli (which I do lovingly refer to as "Gig-lee" even though I'm perfectly aware is pronounced "Ji-lee") was any good.  It isn't just a bomb, it is perhaps the Citizen Kane of bombs, a movie that when seen, leaves one agape at the sheer and total ineptness behind it.  For all those who think either Manos: The Hands of Fate or Plan 9 From Outer Space are bad, at least those two were made by non or semi-professionals.

Affleck, I have long held, is not a good actor, one more successful due to his looks than any actual acting prowess.  However, even for him, Gigli was an unbearably lousy performance.

Gigli was a disaster in every way: critically, commercially, artistically, and has earned a place of infamy in the Hall of Shame.  More than anything else, Gigli however sealed Affleck's hopes to be a major movie star or respected actor.  Sad to say, all the wounds were self-inflicted.

As if to prove that Gigli was the final nail on the coffin of Ben Affleck: Actor or Ben Affleck: Star, his next three movies were also thoroughly rejected.  There was the action/sci-fi Paycheck, the romantic comedy Jersey Girl, and the comedy Surviving Christmas.  People, it seems, had had enough of Ben Affleck.

Even after proof and more proof of the public's rejection, Ben Affleck couldn't bring himself to admit he was the author of his own destruction.  When he was presented with the Worst Actor Razzie for Gigli, he smashes it, as if to say, 'It's not true, I'm a GREAT actor".

As it stands, none of the movies he's starred in post-Gigli have been runaway hits.  Although he's tried to continue to try new things from the topical drama The Company Men and the biopic Hollywoodland (about the only thing he's actually shown any promise in, sadly done in by a lousy script), it's highly unlikely he'll ever reach Damon-esque levels of critical or public acclaim.

At least, in FRONT of the camera.

Here is where the story takes a positive turn.  Ben Affleck has turned out to be an amazing director.  His first film, Gone Baby Gone (starring his brother Casey) is a well-coiled, intelligent, even philosophical mystery that earned a Best Supporting Actress Oscar nomination for Amy Ryan.  His second film, The Town, also landed a supporting Oscar nomination, this time for Jeremy Renner.

In both, Affleck showed a deft touch in keeping the pace going while not losing focus on the story.

As much as I deride Ben Affleck for his acting, he is turning into one of the most promising directors working today.  I quibble about him casting himself in the lead, especially with Argo, where we're suppose to believe he's Hispanic.

I hope that Ben Affleck abandons the screen and focuses more on work behind the camera.  If he does, then maybe he will earn the respect he longs for, and maybe the public will return to a film with his name on it.

With that, I wish a Happy 40th Birthday to Ben Affleck.
Posted by Rick at 8:55 PM