Personal Reflections on Viewing 2016: Obama's America with Ron Paul Supporters
I dislike reviewing political documentaries because people insist on bringing their politics into the film.  I know that sounds odd, but I find that the viewer almost always goes into a film prejudiced for or against the subject to where they almost always can't see the forest for the trees.  Those who despised George W. Bush cheered and applauded Fahrenheit 9/11, the truth be damned. It didn't matter if the narrative wasn't objective: if it portrayed the President as almost Satanic, Bush-bashers took is as gospel and Bush-supporters viewed it as shameless propaganda. In short, they could love or hate it in equal measure.

The sad thing is, if someone praises a political documentary they are seen as being in agreement with it.  If they don't praise it, they are seen as partisan.  That isn't the case all the time, and it isn't with me (or at least I've made an effort to be objective when judging the film itself, not so much my feelings on the content).

When I go see films that I don't agree with, I know I will see things and hear things that go against my worldview.  However, I also go into these films with as open a mind as I can give, hoping that by hearing from the other side I might actually learn something.  It might even persuade me that the other side (either right or left) may be correct (which is what I figure these types of documentaries are all about, less on information and more on indoctrination).

As such, I figure that Loose Change (which details what the makers say is the mass conspiracy over the World Trade Center attacks) was made in part to tell the 'truth' about September 11th and in part to convince me that its worldview is correct.  I don't agree with the thinking of Loose Change (I don't believe there was a 'conspiracy' except among those who use Islam as an excuse for totalitarianism) but I HAVE to go into it with an open mind in order to both review it and attempt to understand both the film and its contentions.  Same goes for Fahrenheit 9/11 and 2016: Obama's America.  I may not agree with it, but it is my job to judge its effectiveness and production quality, not on whether I think Michael Moore or Dinesh D'Souza is right or wrong.

Just as people either loved or hated Fahrenheit 9/11 based on whether they loved or hated President Bush, likewise, 2016: Obama's America has similar issues of people either elated or disappointed in what it has to say (or not say).  I saw this first-hand because I had agreed to go see 2016 with a group of Ron Paul supporters, or as I lovingly call them, Paulistas or Paul-Bots.  Even such gentle teasing can send some of them into fits of fury, but more on that later.

Once the movie was over, I heard from the Paulistas.  The general consensus among the devotees was that it wasn't good.  Now, I didn't hear much about the production value of 2016 (although one of them, perhaps sarcastically, referred to it as 'pretty').  They didn't discuss much about the content of 2016 either save to say it didn't go deep enough into Obama's past Communist affiliations.

What they did discuss and what I did hear both after the screening and over dinner post-screening was that in their case, because it failed to meet their expectations, the film is a failure.  I don't think 2016 is a failure either in content or production value (a rarity for a conservative-based documentary), but to the Paulistas, in the words of one of them, 'I was expecting blood'.

As I continued talking to them and listening to them, all I could think was the Ron Paul supporters had all the hallmarks of a cult.  How did I, a modest little bourgeois fellow, come to such a conclusion?  Well, I looked up some of the signs of a cult, and Paulistas fit quite a few.

There is something worshipful about how they hold Representative Paul in awe.  There is something fierce and fanatical about Paulistas.  To them, Ron Paul is the fount of all wisdom.  One question that I wish I had asked was whether any of them disagree with Paul on ANYTHING.  I keep getting the sense that they don't.  Whether it is economic issues or social issues, Ron Paul is never wrong.


THE LEADER IS NEVER WRONG...
That to me is a sign of a cult.  Ayn Rand to her Collective was never wrong.  Jim Jones and David Koresh were never wrong.  Likewise, Ron Paul is never wrong.  Granted, one could say the same about President Obama or Congressman Ryan, but I don't know many of their supporters who agree with Obama or Ryan on EVERYTHING.  It may be possible that Paulistas may disagree with the good Doctor, but I doubt it.

Ironically, the way Paulistas revere Dr. Paul is exactly how so many people held then-Senator Obama.  I was not ashamed to tell them that to their face: the Paulistas all but worshipped the Representative they same way Obama supporters did.

I remember vividly a person who came to the library in 2008 who was a passionate Obama supporter.  The nadir of his devotion was when he came in wearing a t-shirt reading, "The Only Truth Is Obama".  I was aghast that a mere mortal was being held up to Messianic levels.  So many people saw in Barack Obama this figure who was almost divine.  Hillary Clinton mocked this idea during the primary.  Sean Hannity still mocks it (referring to the President as The Anointed One).

Paulistas would quote from the good Doctor in a similar vein.

This leads me straight to another cult-like issue with the Paulistas. People who disagree with Paul are not just wrong.  They are almost evil, working against the Leader or the Movement.  I heard from a Paulista that he knew Mitt Romney had not won a single primary/caucus save for Utah (wonder why Romney won that heavily-Mormon state).  One guess as to who did.  There was election fraud to keep the true winner (their candidate) from receiving the prize he so rightfully deserved and earned.

Here is another sign of a cult: the group has exclusive knowledge and the world is against them.  I should point out that some of the Paulistas are so-called "9/11 Truthers" (a group that I find odious).  If you present them with anything that contradicts their worldview, they reject it out of hand, insisting that they and only they have the truth and those that disagree with them are either ignorant or active participants in the conspiracy (I think I fall in the former, so at least that's good).

Paul supporters, I overheard them say, were being targeted by the CIA and TSA for investigation and harassment.  I heard things about there being drones waiting for them at the Convention.  Their signs were going to be taken from them should they dare present them at Tampa.  Even the RNC was frightened of them, fearing a floor demonstration at the convention by the Paulistas.

It's this "Us Vs. Them" mindview that I find highly troubling.  I didn't like it when it came from Obama supporters, I don't like it from Paul-Bots.  This idea that 'they are after us' is almost slightly paranoid.  Given how they like to quote Paul like he were Saint Paul, I was a little wary about the group in general (it might have been me, but to see their eyes light up when speaking of Ron Paul is a little frightening to me).

The Leader Cannot Be Questioned or even Mocked.  I remember when I made some silly, innocuous joke about Ron Paul (maybe about his height), and I was verbally attacked by two of his devotees, who insisted that my joke about Paul equalled my supporting the nation falling apart.  There is no dissent possible for a Paul-Bot, and certainly no mocking of the Leader.

I think Scientologists have a greater sense of humor about L. Ron Hubbard than those who support Ron Paul.

Now, in fairness the Paulistas I met were on the whole very nice and pleasant people.  It wasn't even that I could disagree with them.  It was in how they saw Ron Paul as this Icon that Was Always Right, that by being his supporters the World was against them, that Paul could not be mocked even in a frivolous way that I see cult-like mannerisms to his supporters.

Finally, I note that they derive great identity from association with Ron Paul.  I took a glance at a Paulista's Facebook friends list, and was not surprised how many of them featured their profile pictures photos of either themselves with Ron Paul or of Ron Paul himself.  Some of them had Ron Paul signs, and one even had a Profile Photo of Mr. and MRS. Paul!  These people, I should point out, have met Ron Paul, but they aren't in his inner circle.  They aren't his literal friends.  He's never had any of them over for dinner, gone to the movies with them, or know him on a personal level.

They've built this family-like mood that is another sign of a cult: we are a family, we are one.  We are an inclusive group in that we really only associate with those who agree with us.  I wonder if any of them would continue speaking to someone in their group who ended up voting for Romney or decided to switch from Paul to Santorum.  I figure they would do one of two things: either attempt to re-convert them or cut them off for their heresy.

A group that insists on virtual adoration of an all-wise, all knowing leader, that thinks the world is conspiring against them, that believes it has exclusive knowledge, that talks about the Illuminati and the New World Order, that won't tolerate any jokes about The Leader, that would virtually submerge an individual's identity to meld with that of The Leader (to where their profile picture is not one of themselves, but of The Leader of the Leader's family): 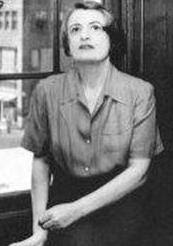 Ayn Rand, the Mother of the Libertarians, once ridiculed the idea that she was the leader of a cult.  She taught Individualism, she said, so she was suppose to have a cult of individuals?  Well, Rand had a group of people who saw in her the Truth, who would not question her ideas and if they did, face the idea they were no longer part of the Collective.  There were elements of Cultish behavior about the Objectivists, as there are among an offshoot of them: the Paulistas.

I, frankly, am much an Individual to be a Paulista.
Posted by Rick at 4:06 AM