Tomorrow is a Tale Told By an Idiot...

I start with a confession: I skipped Tomorrow Never Dies (as well as The World Is Not Enough) when both came out in theaters.  As such, this is my first foray into the Pierce Brosan canon post-GoldenEye.  Having said that, what I found in Tomorrow Never Dies is that this film veers dangerously close to being the first official Bond parody.

007 James Bond (Brosnan) has broken up a large gathering of weapons buyers (a terrorist's arms bazaar).  Among those at the bazaar (and I presume a survivor), is one Henry Gupta (Ricky Jay), who has managed to get his hands on an encoder that will manipulate satellites...something about a GPS or Global Positioning System...whatever that is.  Shortly afterwards, there is an incident at sea: the HMS Devonshire is sunk off what it thinks are international waters and the Chinese think are theirs (it's neither, but more on that in a moment).  World War III looms, and waiting in the wings is media baron Elliot Carver (Jonathan Pryce), who intends to make a killing (no pun intended) by getting the scoop for his empire.

Of course, the deal is that Carver CAUSED the Devonshire sinking and all this is his plan.  It's not for world domination in terms of politics, but something else: broadcast rights.  M (Judi Dench) suspects Carver or someone in his organization is behind this incident and sends Bond to investigate, but he only has 48 hours before the British Navy goes to China.  As it turns out, Bond has a history with Carver's wife, Paris (Teri Hatcher), and if he needs to pump her for information, Bond must do it for Queen and Country...

Well, after spending One Night In Paris (pun definitely intended), Bond goes to Carver's Munich headquarters.  He re-encounters a mysterious Asian beauty, Wai Lin (Michelle Yeoh), but no time for foreplay: the minions, especially Carver's henchman Stamper (Gotz Otto) are on to him.  Carver had already planned to frame Bond for Paris' murder and make it look like murder-suicide with the aid of Dr. Kaufman (Vincent Schievelli), but Bond manages to escape, thanks in part to Q's self-driving car.

Bond manages to get his hands on the encoder and with the help of Jack Wade (Joe Don Baker) finds that Carver's satellites had deceived both the British and Chinese: the Devonshire wasn't in either international or Chinese waters.  It was in Vietnamese waters.  On the sunken vessel, he re-encounters Wai Lin, whom we discover is a Chinese agent.  Now both must avoid Carver's men and stop his plans to bring the British and Chinese into armed conflict.

It culminates with Bond and Lin going to Carver's stealth ship.  We discover that Carver has now a secret deal with some Chinese general: in exchange for helping him take over China, Carver gets exclusive broadcast rights in China for a hundred years.

Curiously, I found that TND had faint echoes of The Spy Who Loved Me.  If screenwriter Bruce Feirstein had dug deeper into both situations and characters (rather than veering off at times into odd moments of humor) he could have crafted a similarly successful film.  Instead, he decided to go for a 'best-of' in terms of Bond films.

One or Two Beauties: Check

On the third part, neither worked well but for different reasons.  Yeoh was great as Wai Lin (she's Michelle Yeoh, so she rarely can do wrong) but she was given very little to do in TND, apart from some great action sequences (more on that later).  She didn't really investigate so much as just appear at the same time/place Bond was.  Unlike Triple X in SWLM, there was no chance for Lin and Bond to really work together to investigate the who/what/why of the plot.

Instead, Yeoh was there I suspect to get at the large following Yeoh has.  As I think of it, there is a reason TND doesn't bother having an investigation because we are told everything up front.  Rather than let the mystery build up, the culprit and motives of our villain are firmly established.

Even worse, the motives are by far some of the silliest.  Here is Elliot Carver (who is an Australian accent short of being Rupert Murdoch), a character with great potential, going through these machinations for exclusive broadcast rights in China.  I kept wondering, 'wouldn't a bribe be easier and cheaper?'  It would have been one thing if Carver, like Charles Foster Kane, sought to use his press to control the world politically, but instead, he goes through creating a stealth ship (and apparently working with some renegade Chinese general of which we're told almost in passing) just to be able to show his shows in Beijing? 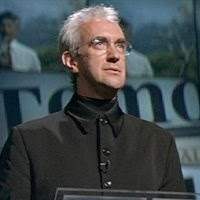 If that weren't already bad enough, Pryce decided that his Bond villain was going to be more Drax from Moonraker and less Max Zorin from A View to A Kill.  Pryce is a good actor, but here, he opts to go camp.  When he mocks Lin's karate skills, it had me laughing, and I thought how could anyone take HIM seriously.  And finally, look at the guy!  Nothing says 'evil' than some guy wearing a black Nehru jacket all the time.

Yet, I've digressed from the Bond Girls.  Hatcher, like Yeoh, had little to do in TND, but unlike Yeoh, Hatcher appeared blank in her few minutes of screentime, almost trying too hard to vamp it up as a spurned lover of Bond's from the past.  How much better TND would have been if we HADN'T been told ahead of time that she was one of Bond's ex-lover.  Even better, we could have started with Bond and Paris together in the opening, and thus when she showed up at Carver's party, it could have come off as a genuine surprise and already established her character and motives to her actions.

Sadly, the script didn't give her much to do except strike a pose, so her quick exit doesn't have the punch it could have had.  Even when we see her body, the entire sequence with Schievelli's Dr. Kaufman almost appears to come out of a spoof of Bond.  The entire scene was veering towards parody, which takes away from what is suppose to be a sad moment.

However, this isn't to say that Tomorrow Never Dies is all bad.  Roger Spottiswoode directs some truly great action sequences (such as when Bond and Lin are being pursued by Carver's thugs and they are forced to ride together on a bike while being handcuffed together).  The HALO jump from an American plane is also well-filmed (though sadly, Baker's Wade has little to do except call Bond 'Jimbo' and try to add a touch of comic relief to the proceedings).  The piece de resistance is when Bond has to manipulate a self-steering car to get away from Stamper's thugs.

One can wonder WHY Q would have created a self-driving car for Bond, and while the scene itself is action-filled and actually entertaining, it does seem to be a bit odd even for James Bond.  However, when it comes to Brosnan's Bond and autos, we've yet to reach the nadir, but that's for another Tomorrow, so to speak.

Another unexpected surprise is having a bit of a Downton Abbey reunion.  You have writer/creator Julian Fellowes as the Minister of Defense, and both Lord Grantham AND his valet/batman Bates (Hugh Bonneville and Brendan Coyle) have brief appearances aboard the British destroyer that will bring down Carver's stealth ship.  It almost makes one wonder if Fellowes thought of both the characters and storyline to his Emmy Award-winning series while working on Tomorrow Never Dies.

Curiously, the title is barely hinted at in the film.  The Carver newspaper is called the Tomorrow, so one thinks that Tomorrow Never Dies is tied in to the newspaper/news manipulation angle the plot has.   However, Tomorrow never actually serves the plot (apart from when Bond goes into the printing press).

Going on to the Bond Song, I start out by saying I like Sheryl Crow, but somehow Tomorrow Never Dies doesn't fit her voice.  Tomorrow Never Dies is a torch song, while Crow is a rock singer.  The song and singer never mesh (which is even stranger given that Crow WROTE the song with Mitchell Froom).  One might have thought Dame Shirley Bassey could have done well with Tomorrow Never Dies, but by having Crow sing it, it sounds like she's trying too hard to be bombastic and lush when it comes across as forced.  Oddly, the closing song, Surrender, by David Arnold, David McAlmont and Don Black and performed by k.d. lang, was far better and more in tune to what a traditional Bond theme song sounds like.  Lang's delivery of the lyrics (which do include the phrase 'tomorrow never dies') makes for a better song than Tomorrow Never Dies, and it was one of the worst decisions co-producers Barbara Broccoli and Michael Wilson (taking over the late Albert Broccoli who had produced all the Bond films before) made in regards to Tomorrow Never Dies.

Apart from a few good action sequences Tomorrow Never Dies offers little to those in front of the camera or to the audience to do or care about.  It isn't the worst Bond film I've seen, but it's not one that I'll remember either tomorrow or any other day with undiluted pleasure.

Next James Bond Film: The World Is Not Enough