By even the most generous measuring gauge, Manos: The Hands of Fate, is not just a disaster, but one of sheer spectacle that one is almost hypnotized by everything that went wrong, which is oddly enough, everything.  This won't be a review of Manos (although I will touch on a formal review later on); instead, it will cover the pre/post-screening introduction by Ben Solovey, who has taken it upon himself to restore the Citizen Kane of bad films, and Jackey Raye Neyman Jones, who was the child in the film.

Also, I will talk a bit about my own impressions of both the film and the audience for this most infamous of spectacles.

First, the original plan was to show Manos in the actual Plaza Theater, which would have been the first time the film played in a formal setting since its premiere at the now-lost Capri Theater, which was literally yards away from the Plaza.   However, issues regarding distribution rights forced a change of venue.  Rather than being shown on a really big screen (and I imagine, perhaps drawing a larger audience), the venue was change to across the street to a ballroom at the Camino Real Hotel.

I can't say whether or not this cut down on attendees, but the ballroom had a large number of people to see the film.  Before the movie began Ben Solovey, who is working to restore Manos, spoke and introduced Jackie Raye Neyman Jones.  She played Debbie, the little girl whose presence inspires a mini Bride Spring among the Master's many 'beauties'.

This presentation of Manos, as I understand it, was to show the work that has been done to restore Manos into a better looking film.  The work is if memory serves right around 80% complete, and this screening was an attempt to raise more funds to continue this work.  On sale were shirts featuring two of the "iconic" characters: Torgo, the caretaker of the home out in the middle of nowhere, and The Master, the dead/undead being who yearns for new brides.  There were also a few other shirts featuring a mock-up of The Master's 'elaborate' garb.

Instantly one could tell that Jones was from El Paso and Solovey wasn't in the first few minutes of their pre-screen presentation.  Solovey referred to the film as "Man-ohs", while Jones called it "Mahn-os".  This might be a minor point but it does show that Jones was closer to the correct Spanish pronunciation of the word 'manos' (which, for those not in the know, means 'hands', hence the title would read Hands: The Hands of Fate to someone cognizant of Spanish, but more on that later).

Jones and her father, Tom Neyman (who not only played The Master but also did the artwork for Manos, including the infamous sculptures and the robe), were completely unaware of the now-famous Manos screening for the television series Mystery Science Theatre 3000 (a personal favorite of mine).  Both the showing of Manos on MST3K and the passionate reception to this now-forty-six year old film from said screening came as a complete surprise to the Neyman family according to Jones.  They didn't even have a print or copy of Manos, so Jones called up the Comedy Central 1-800 number to see if she could get one.

Once on the line, she told them who she was, and Jones tells that there was a long pause on the other end.  Finally, she was informed that Manos was extremely popular there (for whatever reasons one can only speculate).  If memory serves right, within a week a copy was sent to her.

After the presentation, we got some news: Jones is actually working on a sequel to Manos: The Hands of Fate!  She was coy about anything involving what I lovingly call Dedos: The Fingers of Misfortune (which translated, is Fingers: The Fingers of Misfortune), except that in this film, Debbie comes back for redemption.  Nothing doing but that she would tell us anything else about the new film, apart from that funds are still being raised.

Between 1966 and 2012, money still is an issue with independent and even low-to-no budget films.

One thing Jones did say was that she remembered John Reynolds, who played the now-iconic Torgo, with great fondness.  Reynolds killed himself six weeks before Manos' infamous premiere, and Jones remembers him being very friendly and open with her.  However, she also recalls that he was on acid (reminding us that it WAS the 60s), which explains the glazed-over look he had while making Manos.

Jones cleared up the idea that he was ever drunk, even though he looked like it.  It was actually the acid he took that was responsible for it.  If memory serves right she does remember Reynolds as a very gentle person, connecting more with her six-year-old self than with the older cast & crew.

As a digression, I can't be certain whether Jones or Solovey made the point that it was so sad Reynolds didn't live to see Manos' turn to infamy, because he would have enjoyed being a cult figure.  I can say that it is a shame his personal demons overwhelmed him and he was not here to enjoy the status Manos now has.

One thing Jones said that did make me smile was over the title, long a point of curiosity to someone who speaks and understands Spanish.  The original title was Fingers of Fate, but once while discussing the film Tom Neyman somewhat as a joke offered the title of Manos.  His daughter Jackey Jones recounted that Neyman was the only one of the cast or crew who spoke Spanish and that no one else got the joke.  Instead, they took that as a serious suggestion and thus, we got Hands: The Hands of Fate.  No one else was aware of the title's meaning.

Poor Jackey recounted being so upset at hearing someone else's voice come out of her mouth at the premiere, where within fifteen minutes the participants quietly slipped out of the Capri once they saw what a disaster Manos was turning out to be.  Jackey, if memory serves correct, recalled that she burst into tears and hid under her seat.

The major blame resides with director/writer/star Harold P. Warren.  Jackey recounts that even as a six-year-old, she would wonder why thinks didn't appear to make sense.  If she ever expressed her confusion, Warren would dismiss any concerns with a curt, "We'll fix it in post".  The post work was a six-hour editing session at a local television station, which even the simplest novice would realize would never be enough time to put together a coherent or cohesive story.

Finally, she does point out that everyone who worked on Manos did this on their off-hours.  As such, there were no such things as catering or a craft table: everyone brought their own food, but Jackey always knew where it was.  To a six-year-old, this would be a fascinating find. 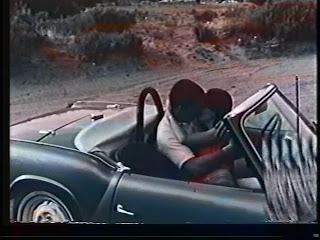 As for the couple making out in Manos (a couple whose presence was thoroughly illogical and a perfect symbol of everything wrong with Manos), Jones did confirm that she had been hired to be one of The Master's brides but had broken her leg (thus making it impossible to participate in that Battle of the Brides).  Warren quickly included this little bit(s) to keep her in the film.  Thus there was a reason why this couple did nothing other than make out...a reason that is not possible in Manos.  Nice work if you can get it.

I think a better writer/director (or even one with a modicum of ability) would have created a scene where Michael and Margaret and Little Debbie stop somewhere that would have allowed our Lost Bride to sit and be relevant to the plot.

However, I'm applying logic to Manos: The Hands of Fate.  It may be one of the worst films ever made, but it's a movie that will never die, and now with Ben Solovey's work and a core of fans who love seeing people try so hard and fail much harder, it never will. 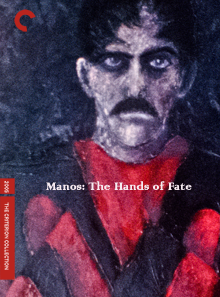