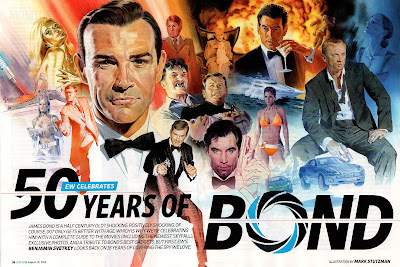 It has been a long time since I posted anything related to my James Bond Retrospective, but now I am ready to return.

Before I go into my Best and Worst Bond Film, I thought I'd stop to cover a category sometimes overlooked.  I've done the Best Bond Girls.

Let me rephrase that.  I've made a list of the Ten Best and Worst Bond Girls.

Same for The Ten Best and Worst Bond Henchmen.

I also have the Ten Best and Ten Worst Bond Songs.

However, when I was going over the Bond Girls while working on my retrospective, I found that there really were two types of Bond Girls: The Primary and the Secondary Bond Girls.

The main difference is that the Primary Bond Girl is the one that 007 ends up with before the closing credits, while the Secondary Bond Girl usually (but not always) does not live to 'die another day'.  She is somewhat disposable, serving the British Secret Agent with, to quote Octopussy's All Time High, 'a sweet distraction for an hour or two'.


One of the few Secondary Bond Girls to live to the closing credits, Lupe Lamora (Talisa Soto) appeared to be a victim of Franz Sanchez.  Side note, Lamora sounds very close to "L'Amour" (The Love), does it not?  However, she was brave enough to face her fear and work with 007 to bring him down.  She was also a very kind person, beautiful, and appeared to have genuine feelings for James Bond.  As such, she could easily have been the Primary Bond Girl if not for another equally great Bond Girl in Carey Lowell's Pam Bouvier.  License to Kill suggests Lupe ends up as the First Lady.  Overall, not bad.

I found You Only Live Twice a terrible disappointment (any film that attempts to convince me that 6'2" Scotsman Sean Connery could possibly pass for Japanese is already cause for embarrassment).  However, one of the few bright spots was Akiko Watabayashi as Aki, Japanese agent.   She was smart and brave and capable of handling 007, and if she had remained with him until the end she would have ranked among the Best Bond Girls.  However, Roald Dahl decided he needed to stick to formula and kill off the first woman James slept with, so Aki got knocked off, and in the most idiotic way.  A Killer SPIDER?  In exchange for the active, intelligent Aki, we got Kissy Suzuki, who did nothing in YOLT except run around in a skimpy bikini and show herself as a dim, subservient Japanese woman.  Stereotypes galore!  Kissy was dreadful overall, but to put her in the place of a better woman is all but unforgivable.

Another Secondary Bond Girl who was allowed to live.  Octopussy is much derided, and I will grant that there are some groan-inducing moments in it.   However, I found it quite enjoyable on the whole, but that is for another time.  One thing that I enjoyed was Kristina Wayborn as Magda, Octopussy's second-in-command.  A master criminal, she was loyal to her mistress.  She is also smart, beautiful, and capable of not just defending herself, but leading a daring raid to rescue Octopussy.  She charmed Bond and she was a knockout in anything she wore: business clothes, as mistress of ceremonies at Octopussy's Circus, or a sari (especially when she descends from the hotel balcony...a mesmerizing sight).  Unlike other Secondary Bond Girls, Magda played a major part in the story, which elevates her above so many others who have died after a romp with 007.


Sylvia Trench gets high marks as one of the few Bond Girls (Primary or Secondary) who managed a return appearance (and as far as we know, one who lived to tell the tale).  When the James Bond franchise was starting up, it was figured that Eunice Gayson's character would be recurring, the woman who waited while 007 played with a bevy of beauties.  She disappeared without explanation after From Russia With Love, but in many ways she was something of a mirror image to Bond.  She was beautiful, glamorous, and sophisticated.  She also earns a high place because she was the one that allowed the secret agent man to utter one of the great lines in film history.  She introduced herself as, "Trench.  Sylvia Trench."  Any guesses as to how 007 responded when asked for HIS name?


She was probably on screen for less than ten minutes.  Yet Shirley Eaton's Jill Masterson has become iconic.  In that brief time she became the model of the beautiful and doomed Bond Girl.  She was lovely and seductive and vivacious, but when she was murdered it was both tragic and unforgettable, an iconic image from a brilliant film.  Even those who have never seen either Goldfinger or any Bond film recognize the beautiful woman covered all in gold.  Shocking yet iconic, the image of Jill Masterson in beautiful but deadly repose is an image no one will ever forget...

Die Another Day is a mess of a movie.  Its story is laughable, its performances embarrassing, its plot nonsensical (even for a Bond film).  Part of the mess involves the constantly fluctuating position of Miranda Frost.  We are barely introduced to her when she turns to be...well, I'm not sure where exactly she fits into the film.  Is she the main villain?  Is she the henchman?  Is she both?  Is she none?  It does not help that Rosamund Pike, who is generally a good actress, decided to phone it in and play her scenes awfully (if one wants to see bad acting, watch her go up against Pierce Brosnan or Halle Berry when attempting to be either menacing or provocative).

Yes, I disliked You Only Live Twice, and in this case we have a rarity: a bad Bond Girl and Bond Henchman.  Karin Dor's Miss Brandt was dumb, inept, and fell into Bond's arms at record time (less than ten minutes if I remember correctly).  She was also hopelessly inept as a master assassin: she couldn't even get a good shot at Bond.   When she gets devoured by piranhas by Number One, it just captures what shouldn't happen.  No matter how bad a character is, you shouldn't be either laughing or cheering her rather gruesome end.


Moonraker is remarkably divisive, and by divisive I mean I have found only one other person who genuinely liked it.  That was my friend/fellow film enthusiast Fidel Gomez, Jr. (who may or may not be dead).  It is not the best Bond film, but I found just enough to enjoy it.  One thing I didn't enjoy was Corinne Clery as Corinne Dufour, Drax's loyal secretary.  She represents the worst in any Bond Girl: once she is 'pumped' for information, she is dispensed with.  That in itself is pretty bad, but what makes it even worse is that she is so remarkably dumb in the movie.  She doesn't appear to understand much of what is going on and just drags the film with her dead performance (no pun intended).  If that isn't enough to condemn her, she gets bumped off in the most unceremonious way any Bond Girl gets bumped off...she literally goes to the dogs.

For Your Eyes Only is one of the best Bond Films (a little sneak preview there for you).  If there is a flaw within it, it belongs to Cassandra Harris' Countess Lisl.  It isn't that she gave a bad performance.  It isn't that she wouldn't have been a great character.  It's just that ultimately she served no real purpose in the story.  She meets and sleeps with Bond, then gets killed off in a rather rushed manner.  It seems so unfair to have this character just to kill her off within minutes of introducing her.  That, more than anything else, the almost cruel way she is killed off almost as if to have a Bond Girl killed off, is what pushes the character down.  The waste of it all is what I object to, that as well as the irrelevance of the character.  They might just as well never have brought her up.

Oh, in the fiasco that was Quantum of Solace, nothing went right.  Absolutely nothing.  It's as if they wanted to turn every convention of a Bond film and hold them up to ridicule.  There is nothing in QOS that is worth anything.  Among them is Gemma Arterton's "Miss Fields".  Let's look at our Worst Secondary Bond Girl.  First, we see her wearing a trench coat...in Bolivia!  One doesn't associate a cold climate with the Latin American country.  Second, said trench coat makes her look like a female flasher.  Third, while credit should be given to "Miss Fields" in that she is the first woman whom Daniel Craig's Bond appears to take any sexual interest in (given how perpetually grumpy he is), her seduction by 007 is simply idiotic.  I am surprised we didn't see him bark out, "Take off your trench coat" and her simply give in.  Fourth, the peculiar names for Bond Girls is a tradition (from Pussy Galore to Jinx) but QOS NEVER had the courage to give us "Miss Fields" first name.  It's only AFTER the film ENDS that we learn her name was "Strawberry Fields."  Even The World is Not Enough's Dr. Christmas Jones had a more believable name, and when it gets to that level of idiocy, we have problems.

Fifth and finally, we have this...

...what I have dubbed the Oilfinger moment.  It is just wrong to copy an iconic Bond film moment and try to make it better.  You can't top Jill Masterson's death, and attempting to copy it only makes it appear to be almost a parody of that legendary image.  When Jill Masterson died covered in gold, it was shocking, sad, but oddly beautiful.  When "Miss Fields" died covered (and we are told, forced-fed oil), it was crass, ugly, and downright vicious.

An ugly moment in an ugly film.

Well, there it is: My Top and Bottom Five Secondary Bond Girls.