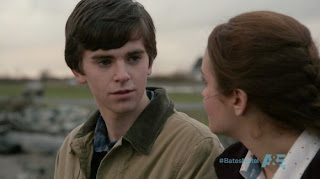 Ocean View continues to build on the previous episode, giving us three stories: Shelby's sex slave, Summers' murder, and Dylan's drug farm.  We continue to get great performances, in particular the duo of Vera Farmiga and Freddie Highmore as the most infamous mother-son duo since...well...

Norman is having the first happy moment of his life.  He has just lost his virginity and has experienced his first taste of love.  However, things are not all well.

Norma has been arrested for the murder of Keith Summers.  This comes as shocking news to Norman, which kind of spoils his losing his virginity to Bradley the night before.  While her sons Norman and Dylan (Max Thieriot) go to bail her out, she is livid with both of them, in particular with Norma...how DARE he not be there when she needed him.  She rejects all peace offerings, insisting that there is a plan to separate them, which her hen-pecked son instantly rejects.  Her wrath is so venomous that she forces her beloved son out of the car in the rain.

Norma Bates is someone who won't tolerate dissent...a bit like Bashar Assad.  Yet I digress.

Dylan suggests to Norman that he should leave Norma, but the younger son cannot bring himself to leave his Mommie Dearest.  Meanwhile, Emma (Olivia Cooke) is coming fast to finding more information about the girl in the journal, and she is determined to solve the mystery with Norman, whom she clearly likes as more than a friend.

Minus the murders and sex slaves, I don't remember being pursued by so many girls in high school as Norman Bates is, but again I digress.

Deputy Shelby (Mike Vogel) now helps with the cover-up of Summers' death by helping get rid of evidence (the Bates Motel's carpet which covered Summers' body if memory serves correct).

In what seems the strangest and most out-of-left-field scene in Bates Motel, Dylan and his weed farm partner Ethan (Terry Chen) are parked outside, having a pleasant chat when out of nowhere someone just shoots Ethan at point-blank.  Dylan, horrified, rushes him to the hospital but leaves before he can be asked too many questions.  Later on, Dylan spots the drugged-out killer and runs him down in cold blood, proving that murder definitely runs in the family.

Emma has found clues, while Norman tells her of his sexual encounter with Bradley.  Obviously hurt, she attempts to dismiss it all as just 'a hook-up', but Norman seems pretty insistent that it is more than that.  This does not stop them from pursuing finding the girl from the basement, tracking her to a boat Shelby owns.

Norma, still grateful to Shelby for destroying evidence that saved her from being brought to trial for Summers' murder, again refuses to admit that Shelby is anything more than both her ally and her boyfriend.  However, Norma is confronted with the actual Asian sex slave, and when she shows the slave a picture of Shelby, we have official conformation: Deputy Zack Shelby is a sex slaver...

Ocean View takes time out from the general weirdness of Bates Motel to give a few human moments.  We see the good and bad of people.  Cooke is just so wonderful as Emma, who is quite beautiful both physically and emotionally.  Despite her condition, she is the most healthy of anyone in White Pine Bay because she has a moral center.  She knows that she has to save the girl in the notebook and will not be dissuaded.

She also conveys beautifully the hurt she must feel when Norman tells her that he and Bradley are together (in his mind anyway).  Emma is completely realistic that for Bradley, her encounter with Norman was probably a one-night stand, but also sees that at the moment the boy she likes and is fond of won't see her in the same way she sees him.  It's a very subtle performance, and one that I was surprised did not merit more attention by award shows. 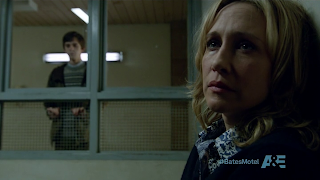 No surprise is Vera Farmiga's Emmy-nominated performance as Norma Bates.  Norma is simply a fascinating character: in her selfishness, her possessiveness of her namesake son, her need to have unquestioning loyalty from everyone.  She basically makes her son apologize for having sex, and in a bizarre way makes it seem that he should be with her and her only.  Not sexually of course, but in almost every other way: emotionally, physically as in present whenever she calls for him, him having to do what she says.

Farmiga, however, does the smart thing in that she doesn't play her like a monster.  It can be so easy to make Norma totally irredeemable, someone who is almost crazy.  However, in her performance we see that she herself falls into strange situations not of her making (such as in the pilot when she is brutally raped and kills her rapist) and attempts to make the best of what she has been handed.  In many ways, Norma Bates is quite human: flawed, selfish, but also in her own way frightened, concerned, and hurt.  A strange mixture of vulnerability with malevolence makes Farmiga's performance so fascinating.  Vera Farmiga makes one almost feel for Norma...at times.

In terms of the story, Ethan's murder as I said seems to come out from nowhere.  It certainly is shocking because we don't expect it at all (and it is graphic) but whether it works in the episode or is just something that will play out in the future we know not.

Ocean View is still another brilliant episode in a fascinating series which keeps building to something big.  We have confirmation that Bates Motel is a true success, and that the 'nice-guy' is into sex slavery...

Next Episode: The Truth