A View For This Bridge 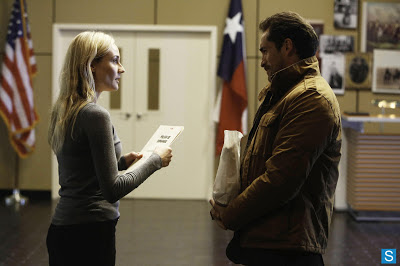 THE BRIDGE: AN EL PASO PERSPECTIVE

As the only Online Film Critics Society representative stationed in El Paso, Texas, I believe I am uniquely qualified to judge the new FX series The Bridge.  As a lifelong El Pasoan (El Paso High School and University of Texas-El Paso graduate...the Sun City is in my blood), I now offer my perspective as to what the series has gotten right and wrong about my hometown.   Granted, this is based only on the Pilot to the series, so perhaps later on we can cover it as a whole.  However, at this point I just want to hit a few points.

In the beginning, Charlotte (Annabeth Gish) offers El Paso Police Detective Sonya Cross (Diane Kruger) money to let her husband's ambulance cross over her crime scene.  While Juarez Police are quite capable of taking 'mordidas' (bribes, literally it means 'bites' as in 'bites of cash/services'), EPPD are not so easily bought off.  I can't recall a time at least recently when an EPPD officer was bribed so easily, let alone so openly.

The Bridge in question, The Bridge of the Americas (also known as the Cordova Bridge) is seen to be remarkably quiet when the bodies were dropped off.  It has been almost a decade when I went to Juarez, but I've never known any of the bridges connecting El Paso to Juarez to be that quiet and empty.

However, I have to make room for plot points (the story had to get rolling somehow) and given the violence in Juarez it is not inconceivable to think the non-business traffic has all but disappeared.  In my youth, going to Juarez was a way to enjoy all the pleasures of the flesh with little regard to such things as morality and legality.  Here, clubs were loose about who they let in and allowed to drink, and women (or men) were easy to procure.

As a digression, I remember in Brokeback Mountain when Jake Gyllenhaal's character of Jack Twist (a most curious name for a gay character I've always thought) goes to Juarez to find someone to share 'the love that dare not speak its name'.  My friend Fidel Gomez, Jr. (who may or may not be dead) and I laughed at Twist's wandering through 'Boys Town' and the depiction of Juarez as this dust-filled town where male brothels were so patently open.

I only heard about the bars and bordellos of Juarez.  When I was in high school, I was never invited to go with any of my friends.  It wasn't until after I started college that I was invited to go there to have my virginity 'taken care of' on two occasions.

For the record, I declined both times.

In any case, I imagine that while some high school kids (particularly those from Juarez who have through whatever ways managed to find an El Paso address that allows them to attend American high schools, usually those with wealth or family in El Paso) still go to Juarez, I imagine the rampant violence that plagues the city keeps most within El Paso.

This is one aspect that is accurate: the violence that has destroyed an already-wrecked city and the corrupt police that help.  Demian Bichir's Marco Ruiz is an honest officer, but by and large most Juarez Police are not.  The city is plagued with corruption and shocking violence, up to where a car bomb went off there.  Our governor, Rick Perry, TWICE claimed that the violence had spilled over to El Paso, reporting that car bombs were going off in EL PASO!  His stupidity and ignorance is shocking, and I have never forgiven him for besmearing El Paso, especially when one considers he made these inept declarations after El Paso was voted the Safest City in America!

Near the end of the episode, the unknown murderer commented that there were only five murders in El Paso, versus the thousands in Juarez.  This is accurate in that in El Paso having seven murders equals a crime wave.  Despite how The Bridge tries in its imagery of the Sun City when giving overhead shots (particularly at night), El Paso is nowhere near as dark or sinister as the show might be painting it.

The character of Kitty Conchas (Diana Maria Rivas), who works at the El Paso Police Department, tells Officer Ruiz when he begins speaking to her in Spanish that she doesn't speak his language.  There are many Hispanics in El Paso who indeed, do not speak Spanish or are not proficient in it.  However, most people in El Paso who are Hispanic are expected to speak Spanish, so Ruiz's reaction is rather typical, particularly Juarez residents who come to El Paso fleeing the violence.  Some of them assume everyone in El Paso speak Spanish: I've seen Juarenses go up to blonde, blue-eyed people and African-Americans and automatically speak to them in Spanish.

As a form of peace offering, Ruiz offers Kitty some pan dulce (sweet bread), which she eagerly takes.  One, this could account for the high degree of diabetes among Hispanics, and two, I can suggest that rather than buying pan dulce off the street, Ruiz would have done better to go the Bowie Bakery, which has the best sweet bread and is a true El Paso treasure.

The Widow Charlotte has a horse ranch.  This would place her estate in what is called the Upper Valley, where many wealthy people live in if not lavish estates at the least large and comfortable homes, some of which are functioning farms.  The Upper Valley, so close to the New Mexico border, is a largely agricultural area, so despite the idea that El Paso is a desert area the closeness to the Rio Grande allows for cotton and vineyards to flourish in the area.

The El Paso Times, so disparaged by Matthew Lillard's character of Daniel Frye, is actually still quite popular in the city.  It partners with other media and is highly respected in the community for information (if not respected for its more common grammatical and punctuation errors, or for an occasional mistake in accuracy).  Well, nobody's perfect.

One thing I would fault The Bridge for (or at least the pilot) is the lack of Hispanic characters, particularly who are from El Paso.  It should be remembered that a good 60 to 70% of the population has at least one Hispanic relative, so to have so many Anglos, particularly in positions of authority, is almost laughable.  One hopes that in future episodes Hispanics will be more than minor characters or bit (read, subservient) parts.

One or two final thoughts on Detective Sonya Cross.  Ruiz at one points talks to his wife about the crazy gringa.  The word gringa is more an invention than anything else.  I have rarely heard anyone use it to describe a non-white Hispanic.  The more common term for an Anglo woman would be gavacha (the male, gavacho).   Since this term is probably not used outside the Southwest I imagine that the more well-known gringa was used, but if one wanted to be true to how El Pasoans talk, it would be gavacha.

Second, and more important, I have never been arrested.  I have seen many police officers,  mostly men (sadly the EPPD still is not as diverse as it might be...the macho mentality is still alive though not as well as it once was).  In all my years of seeing El Paso Police at various events, I have never seen anyone of them that looked like Diane Kruger.  If they did, I'd be a repeat violator.

Most of the officers I've seen are one of two kinds: either extremely muscular, super-fit men, or fat guys who look like they raid Dunkin' Donuts more than drug dens.

On the whole I find The Bridge to be a well-crafted show, one that actually does El Paso a justice.  Far from being a violence-dominated city, El Paso is a quiet town, where murders are few and far between.