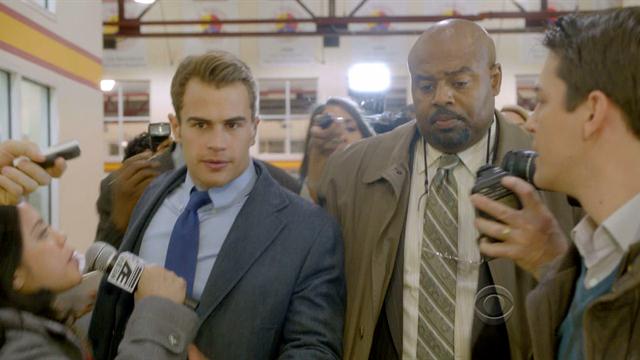 On the eleventh episode of Golden Boy we go into what seems to be a spectacular case: the murder of a major basketball star.  Longshot has in a sense, another continuing theme from Golden Boy: the sins of the father are visited upon the son.  In fact, if one thinks about it, this is the third episode where a parent's past fells the child (after Scapegoat and Sacrifice).  Whether it is intentional or not I know not, but Longshot is a more favorable variation on this theme and a better Golden Boy episode than we've seen...but not by much.

Commissioner Walter Clark (Theo James) makes a purchase of a very rare item, which takes him back to the case that brought him here.  Quinlan Reed (Jay Horton), a LeBron James-type basketball star, has been found murdered in the team's workout facility.  Given that Reed made his own version of "The Announcement" (side note: that was one of the most self-serving and embarrassing moments in television history, up there with the opening of Al Capone's vaults), there are many suspects.

However, the 39th Precinct, including Detective Deb McKenzie (Bonnie Somerville), who doesn't know who Quinlan is (she follows baseball), narrow it down to one or two.  The first is Martin Wilson (Walter Jones), a member of his entourage who was helping train Quinlan.  Martin is as ex-con, so he claims to have panicked at finding Quinlan's body.  We then get another suspect in Vince Cole (Glenn Fleary), an old running buddy of Quinlan who recently had a fight with him (caught on videotape of course, think the Drake/Chris Brown fracas).

As the investigation goes on, Deputy Mayor Holbrook (Eric Morris) wants regular updates into this high-profile case.  Complicating things is that Holbrook, soon-to-be-ex of Clark's mistress, Margot (Trieste Kelly Dunn), has finally found out about their relationship.  Is his interest in the case only because Quinlan played for New York, or is it to keep tabs on Clark?  It might be for revenge, as Clark and Owen (Chi McBride) are taken off the case after they arrest Vince, who has the most amazing alibi: he was robbing a store at the time of the murder.

The case takes a turn when we find that Quinlan's father Darryl (Charles Malik Whitfield) is the one that suggested Martin to his son and who was on the same winning basketball team with Martin back in the day.  The marks of a distinctive ring on Quinlan's face makes them turn their attention to Martin, who was on the championship team before he turned to crime.  However, I offer ONE GUESS as to who else might have a similar ring...

Darryl is much more involved in the case than he is letting on, and while Clark finds evidence that Holbrook is on the take, his mentor Owen (Chi McBride) offers advise of not moving in so quickly.  This corruption is connected somewhat to the case, for Darryl had mismanaged his son's finances, causing a break.  From there, we find that Martin might be trying to cover up for his friend, but Owen shows him that he now has a second chance and it would be foolish for him to give it up.  The sins of the father come to light as we find who killed Quinlan Reed.

On other fronts, Detective Arroyo (Kevin Alejandro) is hedging his bets: while he claims to want to be with Deb, he hasn't quite given up on keeping his marriage to Lorraine going.  Nora Clark (Polly Draper) and daughter Agnes (Stella Maeve) in their own way attempt to get Walter to see or look for his father.  Agnes has discovered Walter, Sr.'s criminal past...on the Internet of all things.  We end with Commissioner Clark at someone's graduation, that of Martin's nephew, and the Commissioner presenting Martin with a particular ring...

Longshot again has that thread of how in particular fathers cause problems for their sons.  There are three screenwriters (Brett Mahoney, Jennifer Corbett, and Christal Henry), but I don't know if they were asked to hit on something we've seen already.  The major drawback to that is that since we've had the son be the killer in one episode, is it really a surprise when we see the father bump off his child in another?  More and more Golden Boy is focusing on the triangle between Clark, Dixon, and Holbrook, with sometimes laughable results (how did Holbrook manage to tip off his ex without anyone suspecting it).  What is suppose to be the subplot is turning into the central story, and I leave it up the viewer whether he/she likes it or not (I could do without it).

I also could do without the talk of Clark's criminal past as a yute (to use Nuw Yowkese).  It is becoming uninteresting to hear in almost every episode how he was a juvenile delinquent who was either pushed into it via his father (the father/son issue coming in again) or just did it to vent.  Longshot was better than the past few episodes, but overall I find Golden Boy is beginning to dim.

Next Episode: Beast of Burden
Posted by Rick at 6:30 AM