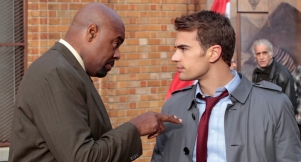 In our ninth Golden Boy episode, we get a little bit of divine guidance when investigating the murder of a priest.  Sadly, no miracles could save the sinking show, and while Atonement makes smart decisions in regards to previously-seen characters, we also get some truly laughable 'twists' that make this a pretty abysmal episode in a series about to meet an untimely end.

Father Steven Truitt (Hisham Tawfiq) approaches Commissioner Walter Clark (Theo James) in church, discussing the Commissioner's offer to be the NYPD Chaplain.  This has Clark going back seven years to when he was a rookie.  Clark has finally found a love life, having an affair with Margot Dixon (Trieste Kelly Dunn), the reporter from McKenzie on Fire who is doing 'undercover work' with Clark, shall we say.  She however, has a problem.  She is going through a divorce, and the soon-to-be-ex is none other than Deputy Mayor Carlton Holbrook.

How a detective never figured out the woman he was sleeping with is married to someone who might cause problems for him in the immediate future is left unexplained, but I digress.

In any case his girlfriend is not his only concern.  Nora Clark (Polly Draper), Clark's mother, has going missing, and despite his sister Agnes' (Stella Maeve) concern, Walter is dismissive of the whole situation.  As far as he's concerned, Nora has been a screw-up and this disappearance is just another sign of how bad of a person she is.

Still, cases must be solved, and we have a doozy.  A priest known for helping criminals has been murdered, and as far as Detective Arroyo (Kevin Alejandro) is concerned, good riddance to bad rubbish.  Even the remarkably pleasant Detective Diaco (Holt McCallany) is not broken up about the good father's end.  However, Clark and Detective Owen (Chi McBride) know personal feelings are irrelevant and the crime must be solved.

In the middle of this case is Natasha (Stephanie Brait), the reluctant informant last seen in The Price of Revenge and whom we know is doomed to die before Clark becomes Commissioner.  She was found with literal blood on her hands as well as stolen watches in her possession.  Has she been stealing and rubbed the padre out to protect herself?  No, she insists.  She was turning her life around and he was helping her.  She was attempting to save his life for she found him, but couldn't.

We do have a suspect: Miguel Montez (Andhy Mendez) whose daughter was killed and whose killer the Catholic priest would not reveal.  Sadly, he has an alibi and things are looking pretty bad for Natasha.  Arroyo is convinced she is up to no good, but given their past she won't talk to him or Clark, so we turn to the woman, Detective McKenzie (Bonnie Somerville).

Arroyo has a habit of having conclusions and using them as a starting point, a bit of working his way backwards.  Despite his good track record obviously Clark is not going to try that approach.  Instead, he does what any sensible person would do: allow a suspect in a murder case one hour of unsupervised freedom to allow her to find the fence she thinks killed the priest.

Poor decision-making skills on the part of Clark give Arroyo a perfect weapon and at long last Owen let's Clark know what's what.  Part of that involves NOT letting suspects wander off without having any idea where they are going.  Eventually, the entire precinct is dragged into Clark's incompetence, leading to a wild chase where Natasha is being held hostage.  Atonement ends with Natasha getting shot (though whether she actually dies is left unanswered), Agnes discovering Nora's secret (she has found a job as a cleaning lady and does not want her daughter to know) and Holbrook needing forgiveness seven years from now.

Much of my difficulty with Atonement involves the idiotic decisions of the Clark family.  First is that the big secret of Nora's (that she's a cleaning lady) is so laughable, finding no payoff with this revelation.  Given how bad of a mother Nora has been, one would think if she had any common sense she would relish the idea of telling both her children that she has found a job.  We also have Walter's shockingly insensitive reaction to both his mother's disappearance and his sister's concern.  Yes, Nora may have been rather inept as a mother, but to just be so flippant makes our hero rather loathsome.

Finally, the idea that any sensible person would allow a suspect to wander about without so much as having someone tail her is just dumb.  Andi Bushell and Brett Mahoney's screenplay make it clear that Walter is slowly blending Natasha and Agnes in his mind but somehow this boneheaded decision is simply inexcusable.

It's clear that the affair entre William et Margot and the triangle with Holbrook is slowly building in Golden Boy, though I wonder whether the payoff will be anywhere as good as the future sequences suggest.  OK...in this I am cheating a bit since I already know (somewhat) where this subplot is going, and it's nice to see the bits coming together.  It does work, but given what we already know, it does make the ending more vague, not less.

Still, I find Maeve's performance as Agnes the most interesting: at a crossroad between being a naïve, sweet girl and a woman, she is compelling in her story (and more nice than her idiot brother).  Kudos also to Alejandro, who shows that he may not be the best man around, but certainly among the best cops in the 39th Precinct.

Ultimately, Atonement may not just be hinting that Holbrook will be playing a larger role in Golden Boy in the future, but also that the overall story is now turning to the here and now and less to how Detective Walter Clark in seven years becomes Commissioner Walter Clark.  On its own, I found Atonement starting to show Golden Boy is slowly losing its golden touch.