The eight episode of Golden Boy tackles some interesting character plot points, in particular the now-fierce rivalry between the two 'golden boys' of the 39th Precinct, future Police Commissioner William Clark (Theo James) and cock o' the walk Detective Christian Arroyo (Kevin Alejandro).  Scapegoat has some solid acting and those twists and turns corruption cases hinge on, and on the whole is a welcome return to form for the struggling (and eventually dead) series.

A corruption case comes to the attention of Police Commissioner Clark.  This has us going back to his first year on Homicide, where it brings back the first corruption case he encountered.

Councilman Isaac Neville is found dead.  Whoever breaks the case is one step closer to promotion.  Arroyo, arrogant to the end, wants that promotion.  However, Detective Owen (Chi McBride) now wants the promotion too.  Helping him along the way is Clark, who would not only be happy to see his mentor rise but his rival fall.  So now the race is on to find the Commissioner's killer.

Arroyo is determined to win the promotion and solve the crime, and he will do anything to get ahead.  This means going so far as to contact IA (Internal Affairs) on Owen.  Dirty tricks in order to get to the case all around.  Clark is furious on this, but Owen again advises to keep going for the case.

At first there is a suggestion of Russian mob connections, but then things turn to Councilman Neville's family.  The detectives discover that his son Tyler (Andrew Stewart-Jones) has been in trouble of all sorts.  However, slowly secrets are coming out.  Far from being a good man, the Councilman is corrupt and shameful, complete with a much younger mistress.

Lucy Reyes (Audrey Esparza), the Lewinsky-type mistress, talks, telling them that in reality Tyler was a good kid who had been repeatedly taking the fall for his father's indiscretions.  Mrs. Neville (Tamara Tunie) basically confirms this, and little details such as the off angle of an autographed baseball bat soon expose Tyler as the killer.  Tired of taking the fall for his dad, he takes his father's life.  A little tit-for-tat with journalist Margot Dixon (Trieste Kelly Dunn), the reported surreptitiously contacted by Tyler to expose Councilman Neville's corruption, brings a pleasant profile of the Precinct instead of the damning expose she could have made about how they are all at each other's throats.

Scapegoat ends with the suggestion from Commissioner Clark that if he had listened to advise to be part of a team rather Owen would still be here... 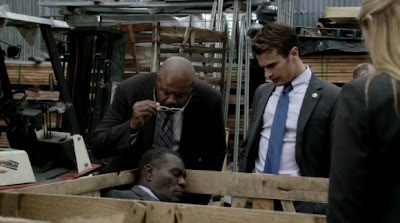 I thought I liked Scapegoat.  I thought well enough of it initially to make it one of the better episodes of Golden Boy, but in retrospect I pushed it down a bit simply because I couldn't recall much from it.

On almost every Golden Boy episode I could recall much of the story or some situation.  Here, I could recall the killer and how Owen and Clark came to find him, but minus that I could not recall much or much of interest.  That being the case, I opted to mark the episode down a bit.

What I did enjoy was that contrast between Owen and Arroyo.  The whole series to my mind has been about which direction Clark will take.  Will he follow Owen's example of slow, steady, reliable detective work where he keeps to the rules and focuses only on the investigation, or will he take Arroyo's route of moving fast, bending if not breaking the rules, and making everything personal?  Scapegoat shows that devotion to duty puts Owen ahead of Arroyo morally, but it also suggests that it will get Owen killed.

That of course is speculation given that with the show's cancellation we will never truly know Owen's fate; this, however, is one of the drawbacks of Golden Boy's structure: because it takes place in the now and opens and closes seven years from now, Clark has knowledge that we don't.  It's a tease for something 'to be continued', but now it won't be.

As for the actual crime, while I admired how little details brought about the resolution I did wonder why Tyler was so weak-willed that he would be willing to be the fall guy to his father's many payoffs and lovers.  It wasn't a bad mystery, just not a great one.

I thought well of Scapegoat but my enthusiasm for it has dimmed a bit between airdate and today.  Still, on the whole I can't say it was bad, so I give it a little above average in a show that had so much going for it, but later on would start losing its way...

Next Episode: Atonement
Posted by Rick at 8:03 AM