Should the ACE Be Restored?

We have the new Emmy nominations, and like last year, I didn't see a single nominee in either Outstanding Drama or Comedy series.  In the case of the former, it would be pretty difficult to, given I don't have HBO and rarely watch much on cable/satellite.  Out of the six nominees for Best Drama, only ONE is broadcast on non-pay television (PBS' Downton Abbey).   The others are all cable programs: Breaking Bad and Mad Men (AMC, once known as American Movie Classics...which kind of went by the wayside, hasn't it), Game of Thrones and True Detective (HBO, a premium cable/satellite channel, which has a separate subscription fee from that of regular cable/satellite subscriptions), and House of Cards (Netflix, which isn't even an actual channel but a video rental service that now has original programming).

In the Comedy series, only two (The Big Bang Theory and Modern Family) are available to all.  The others (Veep, Louis, Silicon Valley, and Orange is the New Black) are all available only to those who have cable/satellite or Netflix subscriptions.

For those of us who don't have HBO or Netflix, why should we care about the nominees, let alone the winners?

Now, I am not saying that none of these shows or their nominees aren't worthy of nominations.  They may be great programming.  However, I am now wondering whether Cable/Satellite, once basically banished from Emmy consideration, has now so dominated the awards that regular network programming has been pushed out. 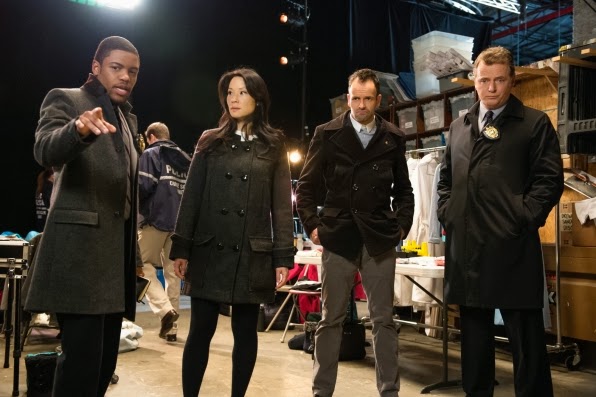 I look for example, at Elementary.  Despite excellent work from its leads (Jonny Lee Miller and Lucy Liu) along with excellent guest starring performances from Natalie Dormer, the show has earned only two nominations in minor categories (Outstanding Main Title Design and Main Title Theme in 2013, losing both to Da Vinci's Demons, which is on Starz).  If we look at the Outstanding Lead Drama Actor nominees, not one is from a network television program.  In the Comedy side, only one Lead Actor is from a network series (The Big Bang Theory's Jim Parsons), received a nod.  Seriously, who watched Derek?

Lead Actress in Comedy and drama has more a more even split between network and subscription with two in Comedy (Melissa McCarthy in Mike & Molly and Amy Poehler in Parks & Recreation) while Drama has three (Scandal, The Good Wife, and Downton Abbey).    However, neither The Good Wife or Scandal, despite their praise and popularity, are in the running for Series, and that goes for Mike & Molly and Parks & Recreation too.  Does this mean the performances in the shows are good, but the shows themselves not?

Compare to a mere ten years ago, when the Lead Actress and Actor: Drama had only ONE non-network nominee each (Edie Falco and James Gandolfini in The Sopranos, with the winner being Allison Janney on The West Wing and James Spader in Boston Legal, both network) and the Drama Series having one non-network nominee (The Sopranos, which was that year's winner).  Comedy had three non-network actors/actresses (Lead Actress winner Sarah Jessica Parker for Sex & The City and nominees Larry David for Curb Your Enthusiasm and Tony Shalhoub for Monk), and two series (Curb Your Enthusiasm and Sex & The City, which both lost to FOX's Arrested Development).

How to explain the rise of Cable/Satellite and the fall of Network?  I don't think network programming has gotten worse or even that cable/satellite has gotten better (anyone seen last season's Franklin & Bash?).

I would argue that there is a wild disconnect between popular shows and shows that win Emmys.  NCIS, a perennial Top Ten show, has in its eleven seasons received a total of FOUR nominations, and only one for acting (a Guest Actor nomination for Charles Durning).  Under the Dome, a freshman hit, received none this year (though perhaps it aired too late to qualify).  Blue Bloods, another highly successful and popular show, has in four years received one nomination, again in a minor category (Stunt Coordination I believe).

On the other hand, shows like HBO's Girls, which has 12 nominations and one win in its three years (one year less than Blue Bloods), has far fewer viewers* (800,000 for Girls, 11.52 million for Blue Bloods).  Elementary has a total viewership of 8.79 million viewers.  Breaking Bad (4.32 million), Mad Men (2.49 million), True Detective (2.4 million).  Is there something in the Television Academy that makes it gravitate towards shows few people watch while ignoring the popular ones?

I feel I've wandered off a bit from my original subject, so let's go back to it.

The rather clumsily titled Cable ACE Awards (or Award for Cable Excellence, making it officially the Cable Award for Cable Excellence Awards) ran from 1978 to 1997 as cable's answer to the Emmy Awards, which stubbornly refused to allow cable shows to be nominated until 1988.  Since then, cable/satellite and now Netflix (which I wonder, does it count as a network of any kind?) have now so dominated the awards show circuit that network programs are now getting squeezed out.

I now make a Modest Proposal.

It may be time to have TWO Emmy Award presentations: one for Network Programming, one for Non-Network Programming.  My reasoning is that because there is such a fight for few slots, opening up the categories to separate network from non-network will allow for greater recognition of programs.  If we slip all the Lead Actors in Drama to their Non-Network Programming Category, it will allow for other actors in the network programs to be allowed a chance (Bryan Cranston tends to bust all comers, even perennial loser Jon Hamm).  In the same way, with three non-network Lead Actresses, Bates Motel's Vera Farmiga (who scored that show's only nomination last year) gets shut out in the furious race for few places.  I can't find an argument that says Farmiga couldn't have taken the place of Claire Danes in Homeland or first-time nominee Lizzy Caplan for Masters of Sex (and ironically, while Caplan got a nod, the Masters to her Johnson, Michael Sheen, didn't get nominated.  I guess her Johnson was better than his...).

We have, in my view, gone from one extreme (leaving out all cable programming) to another (thinking only cable programming is worthy of recognition).  It is time for parity between the two.  It might be time to have separate Cable/Non-Cable Categories, so as to recognize quality work in these two distinct areas without having to struggle to give both sides an even shake.

Either that, or just bring back the Cable ACE Award and let the Emmys go to judging only network programs.

I wrap this up with this.  The Tony Awards are still being broadcast on CBS, but it's a safe bet few people watch.  Why would someone who hasn't been to New York, let alone Broadway, care about the winners for Best Revival of a Musical?   Once they did, because they were exposed to Broadway hits on The Ed Sullivan Show.  Now, with no point of reference, the Tonys are nice but almost irrelevant to almost all America.  The Tonys thought that by bringing in major stars they would get higher ratings and more ticket sales.  They didn't.

Same with the Emmys.  There is a hard-core group that worships Game of Thrones and Breaking Bad, but I think more people care about what the Reagans on Blue Bloods are doing than on which of the Lannisters in Game of Thrones has murdered, been murdered, or committed incest.

It's either splitting the two, or watching fewer and fewer people care about the Emmys.

* Numbers courtesy of TV Series Finale.com and Nielsen.
Posted by Rick at 3:57 AM