The Americans: Only You Review 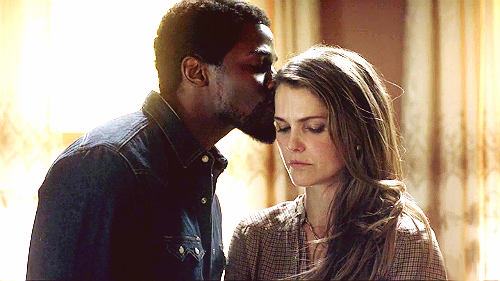 THE AMERICANS: ONLY YOU

With This Ring, I Thee Dead...

Love can be dangerous.  It can motivate you to do terrible things, and whether it is the metaphorical love (love of country) or the literal love (love for a person), love itself can have devastating results.  Only You shows that love can quite literally kill.

The FBI, believing that the death of Agent Chris Amador was committed in a growing turf war between them and the KGB, are determined to find who committed the crime (without realizing that Amador basically brought it upon himself).  Amador's partner, Stan Beeman (Noah Emmerich) pursues the investigation with a righteous fury, though one element he calmly leaves out.  He doesn't mention that he killed Soviet Embassy employee and secret KGB agent Vlad in misguided retaliation.  He goes so far as to deny he had anything to do with Vlad's death to his mole/mistress, Nina (Annet Mahendru), who is devastated at her friend's death, especially since she knows Vlad joined the KGB merely to please his family and was desperate to get out of it.

This isn't to say Stan isn't going through issues himself, both the pain of losing his friend and his guilt over Vlad's death.  He turns to an unexpected source for comfort: his neighbor, Philip Jennings (Matthew Rhys).  Philip has been staying at a hotel ever since he and his wife Elizabeth (Keri Russell) 'hit the pause button' on their marriage.  Stan drunkenly confides his determination to find Amador's killer (whom he doesn't know is standing mere feet from him), but also gives him a valuable and hereto unknown clue.  A ring Amador wore was not found with his body.

This alarms Philip, who tells Elizabeth, who then in turn contacts Gregory (Derek Luke), who had been tasked along with his crew to get rid of both the car and the body.  A serendipitous turn of events comes Stan's way when someone tried to pawn that ring.  The wrecker yard owner doesn't know the names of those who left the car in his yard, only that they are black.  Examining mugshots, Stan discovers that one of the men identified as having brought the car is the same one Beeman and Amador had been followed by earlier on another case.  The FBI quickly finds Curtis (Curtis Lyons), who doesn't like the idea of being charged with treason. 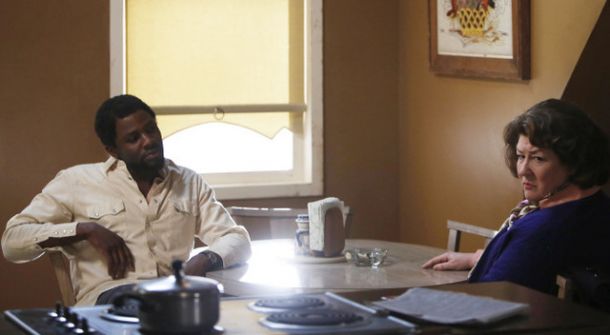 Again, things appear to be spinning out of control.  Into this situation comes Claudia (Margo Martindale) to try to stop the FBI from discovering their agent Gregory.  She offers him an escape: exile in Moscow, where he will live if not in comfort at least protected.  The Jennings' cover MUST be protected at any cost, Grannie makes clear.  Gregory has no desire to go to cold Moscow for many reasons.  One of them is Elizabeth, with whom he has had an off-on affair with for many years.  Gregory's stubbornness on the matter has Grannie and Philip contemplate killing Gregory and let him take the wrap for Amador's death.  Philip may have ulterior motives to go along with this scheme.  Elizabeth is conflicted on the matter: in love with Gregory, loyal to The Cause as embodied by Grannie, and still torn over what she feels for Philip, she goes from wanting Gregory go to Moscow to hoping his wish to be taken to Los Angeles instead.  In the end, Gregory decides to commit suicide by cop, with Elizabeth seeing this on the news.

Only You has so much going for it, primarily in the conflicted emotions and undertones of Philip and Elizabeth.  They are basically arguing their marriage through Gregory, the bitterness from both sides at various points clouding their judgment and exposing the raw human emotions underneath.  Marriage is also at the center of their mirror opposites, the Beemans.  Sandra Beeman (Susan Misner) in her own way is like Philip: she wants out of the life she finds herself in, but like Elizabeth she is committed to her cause (her marriage to Stan, which may already be too far gone to save, given Stan's growing fascination/obsession for Nina).  The Jennings and the Beemans troubled marriages form the backbone of The Americans, and to see this played out with the espionage aspects makes it all a fascinating viewing habit.

This is not to suggest that the actual plot doesn't build up to something grand.  Almost everyone in Only You seems to be at cross-purposes, making this such a tragedy.   The twists and turns as Stan continues his investigation and the Jennings race to stay one step ahead all build on each other, creating intense tension.

The performances are also so strong.  Russell and Rhys work so well both together and apart as our conflicted couple.  Luke sadly was underused in The Americans as Gregory, who loved deeply but not too well.  He also showed a slightly arrogant side when he constantly rejects Grannie's offer (though given how ruthless, even evil Martindale has made Claudia, he might be wise to be suspicious).  The idea of being in Mother Russia doesn't quite appeal to him, which is odd given his great dream was to remake America in Soviet image.  Still, in his scenes with Russell the passion he has for Elizabeth come through and they work so well together.  I'll make another mention of Martindale, for she is fast becoming a favorite character: her sweet and endearing exterior masking a monstrous being.

About the only part I didn't care for was the ending, which had to have a musical montage as Gregory is felled in a hail of bullets.  I thought that was a trifle cliché.  Still, that is a minor point.  Only You can make one love The Americans...

Next Episode: Covert War
Posted by Rick at 6:46 AM